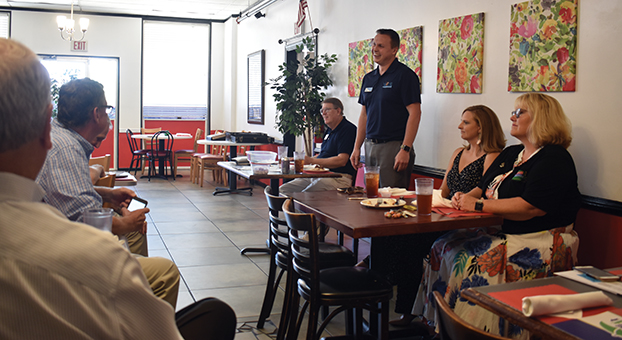 Kyle Yoder, president-elect of the Salisbury Kiwanis Club, addresses the organization's members during a meeting at the Italian Grille. The club met virtually throughout the pandemic, but has since returned to in-person lunch gatherings. Ben Stansell/Salisbury

SALISBURY — With her husband deployed and no one else to watch her children, Lynne Purvis brought them with her when she went to Spencer Jaycees club meetings decades ago.

“Both of my kids were raised and brought up in the Jaycees,” Purvis said.

Heather Resino, 28, vividly remembers tagging along with her mom to those meetings, where she and her brother would gather with the other kids around a large popcorn machine in the back of the room.

“There was a room full of people,” Resino said. “There were quite a few.”

Like many civic organizations locally and across the country, the Spencer Jaycees have suffered from a decline in membership over the past several decades. At one point after the group lost its longtime meeting place in Spencer, Resino thought the club had dissipated entirely.

Now, as the president of the Spencer Jaycees, Resino is working to restore the club she was “born into” to its former glory. She’s not alone in that endeavor. On the heels of the ongoing COVID-19 pandemic, civic leaders across Rowan County are ushering their clubs back to normalcy while working to improve membership and ensure the long-term success of their organizations.

Long before the COVID-19 pandemic forced organizations to temporarily alter their way of existence, membership numbers in many civic clubs began to decline.

Glenn Taylor, who joined the Kiwanis Club of Salisbury in May 1979, witnessed the club’s membership number go down after peaking in the late 1980s.

While civic organizations Taylor is part of, the Rowan Shrine Club and a local chapter of the Freemasons, are “surviving and doing good,” their membership has also been reduced.

When Rik Spencer joined the Salisbury Lions Club in the late 1970s, he was in his early 20s surrounded at the meetings by people around his age. Over the years, that’s changed.

“There were other guys in the club at that time who were of similar age,” said Spencer, the club’s current president. “Now, there’s not as many young people as we need to be viable moving into the long-term future. That’s a challenge.”

The decline in civic engagement received mainstream attention in the mid-1990s by political scientist Robert Putnam when he published “Bowling Alone: America’s Declining Social Capital.” The trend highlighted in Putnam’s now-decades-old treatise has appeared to have continued for several local civic organizations.

While many of Rowan County’s oldest and most prominent civic groups such as the Salisbury Lions Club, Rotary and Kiwanis Club have continued to remain active pieces of the community, smaller groups such as the Gold Hill Lions Club and the Optimist International organization in Landis have disbanded.

The reason for the general membership decline can be attributed to a number of factors both understood and unknown, but Resino thinks it boils down to the fact that younger people aren’t as interested as participating.

Taylor said attrition and a lack of incoming new members has led to the Kiwanis Club declining slightly in membership. Another factor, he said, might be that businesses are less inclined today to pay for their employees to be a part of civic groups. He also agreed with Resino’s assessment that young people are generally less interested.

“They’re too committed. There’s too much other stuff going on,” Taylor said. “They’ve got kids playing sports or are doing other things. They just don’t have time for it.”

COVID-19 has made it difficult for Resino to recruit new members to join the Spencer Jaycees. Taylor and Spencer, however, said their clubs were surprisingly successful with recruiting new members despite the pandemic.

The Lions Club, Spencer said, added two new members during the past year, but it lost three who passed away or are now homebound. The club currently has 41 members on its roster.

Likewise, Salisbury Rotary Club President Ted Goins said the organization added to its ranks during the pandemic. The Rotary currently has a little over 100 members and is one of the biggest chapters in the region.

While the pandemic didn’t disrupt recruitment efforts for some clubs, it did impact the way many clubs conducted meetings, held staple events and celebrated — or didn’t celebrate — their anniversaries.

The Salisbury Kiwanis Club, whose overarching mission is “changing the world by serving children, one child and one community at a time,” was supposed to celebrate its chapter’s 100th anniversary last November. Instead, is planning to celebrate with an event this fall.

The club held a drive-thru version of its annual pancake festival in April. Taylor said the fundraiser was a success and the money raised will likely surpass pre-pandemic totals.

“That really worked out phenomenal for us,” Taylor said.

Kiwanians met exclusively for many months during the pandemic via Zoom, but that left out some members who might not be tech savvy. Taylor said about 20 members attended a Zoom meeting on a good day, compared to several dozen who would typically attend the club’s luncheons.

In the previous several weeks, Kiwanians have been meeting, albeit in smaller numbers, at the Italian Grille downtown. At the end of July, the group will return to its normal in-person lunch gatherings at the Country Club of Salisbury.

“We still have members that haven’t felt comfortable coming back yet, but once we get to the country club we hope more of them will start attending,” said Rick Eldridge, a longtime Kiwanian and the club’s current secretary-treasurer.

The Salisbury Lions Club, whose core goal is to support those who are blind or visually impaired, was forced to cancel its major fundraising golf tournament in the spring of 2020. As a result, the organization’s budget was significantly reduced. However, with less expenditures, Spencer said the lack of funding didn’t impact the club too negatively.

The North Carolina Lions Club was forced to cancel the fall fishing trip to the Outer Banks both last year and this year. The Salisbury chapter, Spencer said, typically pays for about 20 people who are blind or visually impaired to attend the trip. This summer, the club sent a few Rowan Countians to Camp Dogwood, a weeklong summer camp near Lake Norman.

The club hosted its golf fundraiser several weeks ago, which will help allow it to continue to administer vision screenings for young children.

“When we find somebody with a problem, we send a note to their parents that they need to see an optometrist and ophthalmologist,” Spencer said. “We’ve had children fix major problems simply by fixing an eyepatch. If the (Lions Club) went away, who would catch that? I don’t know.”

During the pandemic, the Salisbury Rotary Club met exclusively via Zoom and was forced to host its annual raffle, one of its staple fundraising events, in a virtual capacity. The raffle raises money for scholarships that are given to Rowan County students going off to college. In addition to serving as a way for young business professionals to network, Goins said the organization also buys shoes for elementary children through a program called “Happy Feet.”

Goins credited Elaine Spalding and Steve Fisher, the group’s previous two presidents, with navigating through the virtual environment necessitated by the pandemic. 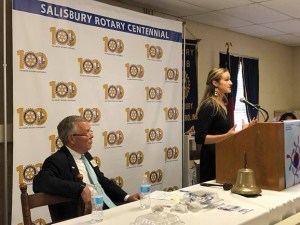 Ted Goins listens to the presentation from Sada Stewart, executive director of the Historic Salisbury Foundation, during the Salisbury Rotary Club’s first in-person meeting last week. The program was directed by Leigh Ellington, who actually joined the club virtually in August. Photo submitted.

With civic organizations meeting in person and getting back to their traditional ways of conducting business, vital membership recruiting efforts could pick up.

“A lot of people said, ‘I might be interested, but I’ll just wait until you’re meeting in person again,’” Goins said. “For some people, it didn’t make sense to join during the pandemic and by Zoom. We’ve recently had a tremendous amount of interest. I’ve sent out just this week two applications.”

For the Lions Club, Spencer said it will be crucial to bring in young members in the near future to secure the club’s long-term viability. To do that, Spencer believes the organization must improve its public awareness and perception.

“It’s kind of funny. You go out on the street and ask somebody, ‘What do you know about the Lions Club? What do the Lions do?’ They’ll say, ‘Well, they sell brooms,'” Spencer said. “We do, but very few people really know what we do. I think there’s a demographic issue and a societal issue with people not joining civic clubs as regularly as perhaps they once did at younger ages, but it’s also a matter of people knowing what we do.”

Goins said one of the keys to successfully recruit younger members to the Salisbury Rotary Club is to continue to increase the organization’s inclusivity. The club recently adopted a set of initiatives around diversity, equity and inclusion that were crafted in part by Hood Seminary President Vergel Lattimore and Rowan-Cabarrus Community College President Carol Spalding.

Instead of using aggressive recruiting tactics to increase participation in the Spencer Jaycees, Resino said she hopes to attract new members by increasing its community involvement — a build it and they will come approach.

“We’re kind of working from the ground up perspective,” Resino said. “We can’t focus necessarily on recruiting and membership and what we don’t have right now. We have to focus on what we’re doing with what we have to keep functioning with what we’ve got.”

The Spencer Jaycees recently appeared at the town’s All-American Saturday Night out a few weeks ago and has plans to host a few upcoming fundraisers. As usual, Resino said the club will adopt a family in need during the holiday season.

Resino, who is currently hosting the club’s meeting at her own house, said she is hoping to prove doubters wrong about the future of the Spencer Jaycees.

“Everybody has told me that they see nothing but this club folding, but I see something different. I’m not one to give up on things,” Resino said.

One day, she envisions the Spencer Jaycees meeting in great numbers as they did before, with a few kids running around, eating popcorn.

“I dream about that,” Resino said. “One day, it will be a reality.”