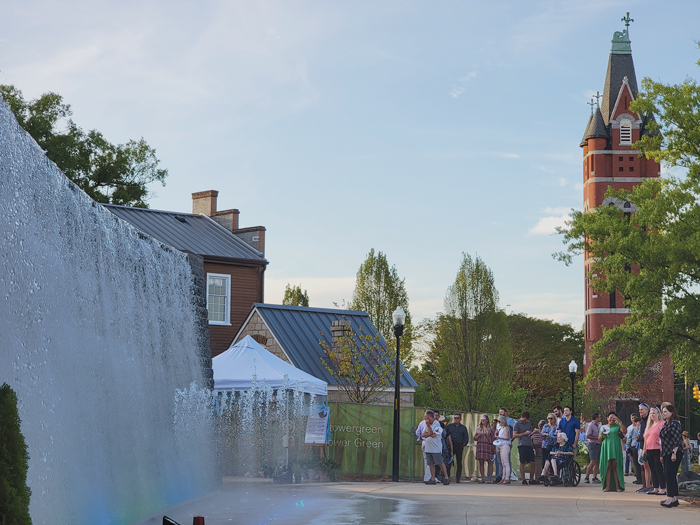 Josh Bergeron / Salisbury Post File Photo - Some nearby residents say the lights at the Bell Tower Green Park are too bright.

SALISBURY — The Historic Preservation Commission on Thursday tabled a request to replace 19 lights at Bell Tower Green Park following concerns from nearby residents that the lights are obtrusive.

With the park expected to open to the public in five weeks, the commission plans to reconvene before its next meeting, scheduled for Aug. 12, to discuss the issue further with lighting engineers and related experts.

Bell Tower Green President Dyke Messinger and Charlotte-based agent Allison Merriman have requested a certificate of appropriateness for the removal and replacement of 19 existing pedestrian-level light fixtures inside the perimeter of the park.

Currently, Duke Energy Acorn LED fixtures exist throughout the park, and the request is to replace those fixtures with Duke Energy Open Deluxe Acorn LED fixtures. The fixtures being requested would not have a glass covering and would reduce the color temperature from 4000 Kelvin to 3000 Kelvin, providing a warmer, more yellow-toned light. The International Dark-Sky Association recommends using a light color temperature of no more than 3000 Kelvin to reduce “skyglow.”

Additionally, the “cutoff” style of the proposed light fixtures is intended to help reduce the level of “uplight,” or upward illumination. Applicants are requesting the lights be placed on 12-foot aluminum poles. They would resemble the perimeter lights that currently border the park along South Church, West Innes and South Jackson streets, minus the glass enclosures. The perimeter lights located along West Fisher Street are Duke Energy teardrop LED fixtures that include an aluminum supporting arm.

In 2019, the HPC approved the perimeter lights, which stand at least 16 feet tall.

Steve Beck, who lives on the 300 block of West Fisher Street, said he and his neighbors appreciate the park and the work that’s been put in, but the light emitting from the park is too obtrusive. He cited section 4.3 of the city’s Local Historic District Design Guidelines, which states, “Warm spectrum light sources and unobtrusive lighting fixtures are recommended. Lighting levels should provide adequate illumination for safety concerns, but not detract from or overly emphasize the building or the site.”

Beck added that there was “no more perfect reason” for such a clause than when the exterior lights were turned on at the park in December. He requested HPC members deny the request, and called on them to observe all of the lights at the park at night to truly understand the impact experienced by nearby residents.

Merriman said the current, cooler lights in the park are harsh and not ideal for the overall design of the park. She said those working on the project have worked with Duke Energy and the city to have the lights turned off until the concerns from neighbors are resolved.

Though the proposed lights meet all of the city’s standards, HPC members struggled to make a determination based on the word “unobtrusive” and its ambiguity.

HPC member Jon Planovsky said section 4.3.2 of the code only applies to light fixtures, and not the “spill” of the light, adding that it’s an unfortunate inconvenience with a public park being located near residential homes.

HPC members ultimately ruled there was insufficient testimony about the impact of the emitted lights and their distribution patterns to make a final decision. They requested representatives of the Bell Tower Green Park project provide more detailed information about the lights, preferably from a light engineer or a related expert. The commission uses quasi-judicial procedures, which requires findings-of-fact and evidence with sworn testimony from witnesses before issuing a decision.