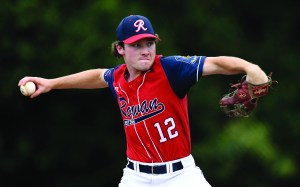 Rowan pitcher Mattox Henderson threw a no-hitter on Friday against Concord. Photo by Wayne Hinshaw, for the Salisbury Post.

KANNAPOLIS — It was drama-less and it was a five-inning game, but a no-hitter is a no-hitter.

They don’t happen all that often, but Mattox Henderson threw one on Friday as Rowan County steamrolled winless Concord 10-0 in a division game played at A.L. Brown High.

Rowan (7-3, 5-0) stayed on top in the Southern Division. Every division game matters, as only the top two teams in each division will make the condensed Area III playoffs.

East Rowan graduate Henderson (2-0) struck out five and walked two. He fanned the side in the second, but mostly it was quick outs. He located first-pitch fastballs on the inside or outside corners and cooperative Concord batters put them in play for outs in the air or on the ground.

Dylan Driver made some good, running plays in right field, and Henderson made a nice play himself to help preserve the no-hitter. Rowan didn’t make any errors.

One foul ball was crushed on a fourth-inning fastball that drifted down the middle, but Henderson, who mixed in a few curveballs, finished off the gem. Tristan Miller, Henderson’s East teammate, caught the no-hitter.

Aiden Schenck, who played at A.L. Brown before transferring to East, went 4-for-4 to lead Rowan’s offense. CP Pyle went to the plate four times and scored four runs. Driver drove in three.

Henderson already had a 4-0 lead when he took the mound for the bottom of the first, so there was never any pressure. He pounded the strike zone.

Charlie Klingler opened the game with a double. Walks to Pyle and Logan Rogers filled the bases. Driver singled in two. Schenck’s single made it 3-0, and Peyton Summerall got another run home with a hit.

Rowan enjoyed another four-run inning in the second. With one out, Pyle, Rogers, Driver and Schenck smacked consecutive hits against Concord starting pitcher Sawyer Osborne, and Summerall lifted a sac fly. After two walks, Austin Fulk’s infield hit made it 8-0.

Pyle scored on Driver’s groundout for a 9-0 lead in the third.

Rowan went down 1-2-3 in the fourth, but picked up its 10th run in the fifth when Schenck singled in Pyle.

That gave Henderson a chance to end the game early via the 10-run rule — and he did just that.

The game lasted less than 90 minutes.

Rowan is home at Staton Field against Concord on Saturday at 7 p.m..