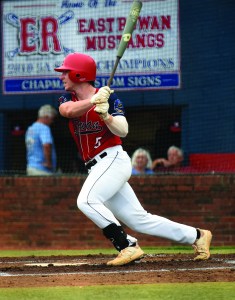 Rowan County’s Logan Rogers is having a sizzling summer. Photo by Wayne Hinshaw, for the Salisbury Post.

There were no touchdowns, field goals and safeties, but there were plenty of walks, errors and HBPs.

The game had 10-run rule written all over it, with Rowan leading 11-2 at one point, but Rowan miscues and Mooresville determination turned it into a three-hour marathon that went the distance. The game started almost 30 minutes late after some rain in Mooresville, so it wasn’t settled until the final Mooresville batter went down on a strikeout at 10:28 p.m.

Mooresville put together a four-run fourth and a five-run sixth to keep the home fans entertained and hopeful.

Rowan (6-3. 4-0) enjoyed a four-run third, a six-run fourth and a four-run sixth. After Mooresville crept within 15-11, Rowan tacked on three more in the seventh just to make sure.

The usual suspects did the bulk of the damage. That’s No. 3 hitter Logan Rogers and No. 4 hitter Dylan Driver. No surprise there. They’re having legendary summers.

Rogers had a triple, homer and double by the time the fourth inning was in the books. A rare cycle looked like a great bet, but Mooresville had seen enough. Rogers walked in his last three trips to the plate. He walked with the bases full in the seventh.

Rogers had five RBIs, nothing for him to get overly excited about. He’s had a six-RBI game and a seven-RBI game already.

Rogers tripled with two outs in the first inning and scored the first of the 29 runs that would be tallied on Driver’s RBI single.

Rogers followed a couple of walks with a three-run homer to right-center in the third. He scorched a run-scoring double in the fourth.

While everyone was wondering if Rogers could complete the cycle, Driver made a bid to sneak up one of his own. He socked a triple in the third and doubled in the fourth. He added his fourth hit, but he didn’t get the homer. Driver drove in four.

Rowan actually trailed 2-1 after the bottom of the second, but Rogers’ three-run blast put Rowan ahead to stay.

On the mound, it wasn’t a noteworthy night for Rowan.

Driver started and worked into the fourth. Rogers relieved him and struck out two of the five men he faced, but miscues led to runs.

Chase Drinkard, who has been very reliable, was able to finish up.

Rowan plays Concord (at A.L. Brown) at 7:30 p.m. on Friday and is home against Concord on Saturday.

Memories Radio 1280 broadcasts all the games if you can’t make it in person.

Games start at 7 unless noted