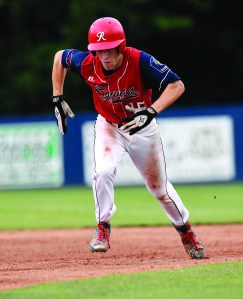 Dylan Driver homered for Rowan County on Sunday. Photo by Wayne Hinshaw, for the Salisbury Post.

GRANITE QUARRY — The way he’s been hitting, a walk-off grand slam on the Fourth of July didn’t seem out of the question for Rowan County American Legion slugger Logan Rogers.

But no one gets it done every time in baseball, the sport where three out of 10 gets you in the Hall of Fame.

With the bases full of teammates, Rogers rapped into a snappy, game-ending double play, and Davidson County held on for a 12-9 wild victory.

While the result didn’t affect either team as far as their division standings, it was one of the more exciting games of the season. Playing in front of a big crowd at Staton Field, Rowan County (5-2) seriously threatened to come all the way back from an 8-1 deficit.

Catawba recruit Dylan Driver launched a solo homer to left-center leading off the bottom of the second against Williamson, but the turning point would come later in that half-inning.

Rowan loaded the bases with two men out for hot-hitting Charlie Klingler, but Williamson kept the Hawgs’ deficit at 1-0 by getting Klingler on a popup. Rowan would spend the rest of the day trudging uphill, and that was a steep climb after the visitors erupted for six runs in the top of the third.

Rowan starting pitcher Kaleb Burleyson, the first of five Rowan hurlers, looked sharp for two innings. Davidson was aggressive, making quick outs, and it was six up and six down.

But an error and two walks set the table in the third for Post 8 masher JR Lingerfelt, who promptly belted a grand slam over the right-field scoreboard for a 4-1 Davidson lead.

Then Davidson stacked three more hits to knock out Burleyson (0-1), including the RBI doubles by Parker Bryant and Gage Doss that pushed the lead to 6-1.

It got worse. In the top of the fifth, Davidson scored two more. Lingerfelt rocketed a solo homer, and Tyler Shytle had a run-scoring single.

Now Williamson had a seven-run lead and was on cruise control, but an error helped Rowan put together a five-run bottom of the inning to get back in it. Aiden Schenck and Peyton Summerall pounded two-run doubles, while Jason Causey singled home a run.

There was plenty of hope at that point, but Rowan’s bullpen couldn’t stop the Hawgs from piling on. Post 8 added two more runs in the sixth and two more in the seventh.

Rowan kept swinging against reliever Brennan Hord, who took over from Williamson to start the sixth.

Rogers got Klingler home from third with a groundout in the sixth for his 21st RBI in seven games, but Rowan trailed 12-7 heading to the bottom of the seventh.

After a hit batsman, an error and a balk started the inning, Austin Fulk’s infield hit made it 12-8 before Hord could get the first out.

Klingler walked to load the bases.

CP Pyle’s single made it 12-9,  kept the merry-go-round in motion and brought Rogers, who had seven RBIs on Saturday, to the plate. Rogers hit it hard, but Davidson turned a game-ending twin killing.

Bryant had four hits for Davidson, while Lingerfelt, who had a sac fly in addition to his homers, drove in six.

Rowan got two hits each from Klingler, Driver, Causey and Schenck.

Rowan is back in action again on Monday, traveling to Randolph County. That’s a makeup of an earlier rainout.