In 23 objects, and lots of stories: Small items can be cogs in larger stories later on 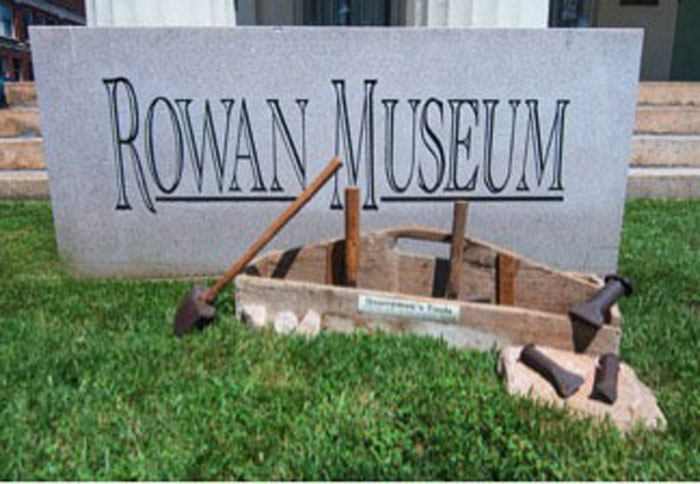 This set of granite working tools was given to the Rowan Museum by the family of Henry Kirchin of Granite Quarry. The heavy iron chisels and mallets date to the early 1900s. The trade in dressed granite was one of the largest sources of wealth in Rowan County for more than a half century. The industry dated to the 1870s and resulted in the founding of both Granite Quarry and Faith by the 1890s. (Photo by Michael Bitzer.)

Note: This is the second in a series of articles on county history, based upon the holdings of the Rowan Museum and other local historical organizations.

Among the more unusual items in the holdings of the Rowan Museum is a set of granite working tools, dating from the late 1800s.

They remind us that small items are cogs in the making of later, larger stories. These remarkable chisels and other items are an apt reason to come see the museum in July, for they are one of the reasons we have the town of Faith, and July, as all Rowanites know, is the time for the celebration of the Faith Fourth. Historically speaking, as we will see below, without all the hard work done by men with tools like these, there likely would not have been the town of Faith, and, hence, no parade at that locale.

The granite industry was one of the most important developments in Rowan County after the Civil War. It was made possible by the advent of the railroad, with its ability to carry heavy objects almost anywhere in the nation. Dunn’s Mountain was worked by 1873. In 1891 Kluttz Quarry was shipping to Cincinnati and Louisville. By 1896 at Woodside—later, Granite Quarry — “the ringing of the hammers” were “heard from every little boulder.” The same chip and clang could be heard from those fracturing granite in nearby Faith. Both white and black men were employed in the quarries.

“Faith settlement” became news in 1893, when its premier promoter, J.T. Wyatt, reported on the growth of the “granite belt.” Wyatt noted that the old millstone site at Phillips Mountain was located between “the granite quarry siding and Woodside” on the Albemarle Railroad and the Rock post office near the old Sherald Farm. That farm had been sold recently, and its acreage divided into lots. Those lots formed the nucleus that became the town. Wyatt is reputed to have named the town, since he was getting into the granite business “on faith” alone.

The impetus for the town was to house the growing number of quarry workers and provide them with services. J. W. Frick’s saw mill provided the lumber for the first houses, then he and Wyatt went into the business using the millstones they made for portable corn mills. Going into the roller mill business were the brothers John and Monroe Peeler. W. S. Earnhardt and William Foil were among the other first male citizens of “the city of Faith”.

By 1896 the village, “situated in the center of the granite belt,” was “booming”. By 1898 its two stores had been doubled to four, and it began to build churches: Shiloh Reformed and the Baptist Church in 1899, then the sanctuary of the Lutheran congregation soon after. Houses formed “the long row” along the main street. It had two telephones and sported a brass band and three baseball teams. By that time “two houses with two stories” were “going up.”

By the late 1890s several Faith pioneers, including Wyatt, J. D. A. Fisher and B. A. Fesperman, were running their own granite cutting operations. Hundreds of hands were at work with hand tools like the ones in the museum, cutting out large blocks of the pink and white stone. Faith boosters took pride in this skill set. As Wyatt argued in 1899, “the rough granite is not valuable … the work put into it to get it into proper shape is what counts.”

Hundreds of carloads of cut granite were shipped across the country. Faith and Woodside made “horse troughs, hearth rocks, bases, steps, window sills, and curbing,” according to Wyatt. A granite crusher installed in 1899 provided gravel for paving streets. All of this had to be delivered via “rock wagons” that took the ore to a nearby depot. At one time there were seven derricks being used to mount the curbing and sills into the wagons. By 1900 there were “so many young men in Faith working the quarries,” because “there is so much work to be done here.”

Faith grew apace. The town was incorporated in 1903. There were sixteen local granite companies by 1906, including the Balfour Quarry. The population was 306 by 1907.

And there was celebration at hand. In 1900 Faith held its first annual Confederate veterans reunion on July 4. The brass band led a parade and “the old soldiers” followed on white horses. There was a picnic in the grove and speakers and music and games were part of the festivities. Three thousand came to it in 1901. Sound familiar? The same event was replicated for the next couple of decades, starting a pattern that became the precedent for the revival of the Faith Fourth in 1946.

So, it can be quite historic what a master can produce with the right hand tools, both directly and indirectly.

Dr. Gary Freeze, a retired Catawba College professor of history, is a volunteer researcher for the Rowan Museum.

One killed, one injured Saturday in Kannapolis