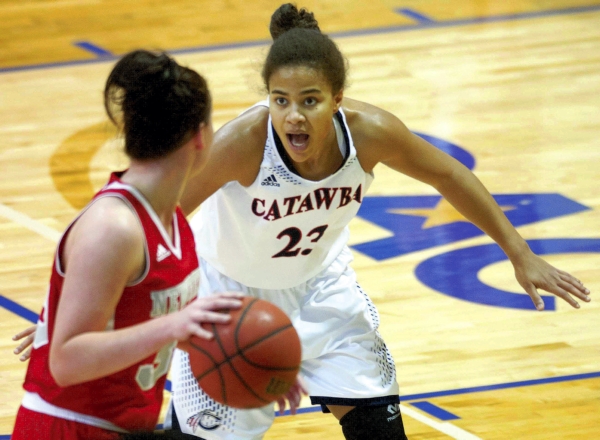 Now she’ll also have to adjust to being called “Head Coach” Evans.

An Erwin Middle School P.E. teacher and East Rowan’s jayvee girls coach since she graduated from Catawba with degrees in exercise science and physical education in 2017, Evans has been named as the successor to departing varsity coach Kevin Holland.

Holland coached the Mustangs for five seasons. He’s been hired as a teacher and girls basketball coach at West Brunswick High on the North Carolina coast.

Becoming a high school coach wasn’t a long-time dream for Evans, but it’s a natural progression for someone who’s had basketball at the center of her life for a long time.

“Basketball has always been very important to me,” she said. “I had a ball in my hands from the time I was 5 years old. I was never 100 percent certain I would become a high school basketball coach, but I did know I wanted to always be involved with the game in some way.”

She lists her step-father Cleon Cook and former Catawba head coach Angie Morton as the two biggest influences on her hoops journey.

Cook is a prominent AAU basketball coach, so Evans was well-schooled in the fundamentals from an early age.

Born and raised in Statesville, she became a starter for North Iredell High’s strong program as a freshman. By her junior year, she was directing North Iredell in some fierce games in the North Piedmont Conference against West Rowan, Carson and East Rowan. A 5-foot-8 guard, she averaged 15.6 points and battled for eight rebounds per game. She was named Iredell County Player of the Year for 2011 by the Statesville Record & Landmark.

She was a 1,000-point scorer in high school, but she encountered serious adversity the summer between her junior and senior seasons. She suffered a serious knee injury at Lenoir-Rhyne’s team camp that threatened to wipe out her senior season and her college opportunities.

She had knee surgery in August and began a rehab program. She finally was cleared to play on Jan. 30. She’d missed 18 games of her senior season, but on Jan. 31, she returned to the court — against East Rowan. She scored 17 points and led North Iredell to win against an East team that included Karleigh Wike, Kelli Fisher, Sydney Poole and Lauren Thomas.

Johnson began her college career at Belmont Abbey in 2012-13. After her freshman year, she transferred to Catawba.

She had to sit out the 2013-14 season due to transfer rules, but for the next three seasons she proved to be one of the best guards in program history, scoring 1.363 points for the Indians.

The most memorable game had to be the Indians’ visit to Jefferson City, Tenn., to play Carson-Newman in December 2016.  Catawba was short-handed, making that long road voyage minus three players, including leading scorer and rebounder Terri Rogers. Johnson nearly won it by herself, but the Indians lost 83-79. Normally, Johnson shot a lot of 3-pointers, but on that night she was a driver. She took only one 3-pointer (she made it), but she was 12-for-17 on field goals and 16-for-19 on free throws. The 16 made free throws and 19 attempts from the foul line were school records. Her 41 points tied the long-standing school record of Hall of Famer Danyel Locklear.

In 2019, Taisha DeShazo poured in a record-breaking 42 for Catawba, but that incredible game at Carson-Newman is still a fond memory for Evans.

“That one I remember not so much for all those free throws, but for the 41 points,” Evans said. “To tie a record set by Danyel Locklear meant a lot to me.”

Evans was a remarkably well-rounded offensive player. She’s in the Catawba record book for 3-pointers as well as free throws. She made a school-record eight 3-pointers in a game against Limestone as a sophomore. She went 6-for-6 from long distance against Brevard as a senior to tie the school record set by Hillary Hampton (Nixon) for most 3s in a game without a miss.

She was doing student teaching at Erwin before she graduated from Catawba, so the basketball players who are in East’s program now have been around Evans for a long time.

“I think that’s really important as far as building relationships,” Evans said. “I’ve known our juniors since they were in sixth grade and I’ve known the seniors since seventh grade. And I’ve coached those girls on East jayvee teams.”

Evans’ 2019-20 East jayvee team was successful. East, like most of the area schools, didn’t have a jayvee team in the COVID-shortened and drastically delayed 2020-21 season.

“Bri is well-prepared to be a very good head coach,” Holland said. “She knows the game as far as the X’s and O’s, but more importantly, she knows the girls and they know her. She won’t have the big learning curve that I had when I first came to East. It should be a smooth transition for her. The only thing she doesn’t have right now is the experience of managing a program, but that’s something that you can only get by actually doing it.”

Evans prefers to play fast, run when it’s there and motion offense in the halfcourt when the Mustangs have to set up.  East will be guard-heavy, but the Mustangs will be far more experienced than they were in Holland’s final season when almost everyone was new to the varsity level.

On June 5, Evans married another athlete who made his mark at Catawba.

Trey Evans was recruited out of Georgia and became a stellar All-South Atlantic Conference linebacker for the Indians. He got his coaching start at Salisbury High before joining Curtis Walker’s staff at Catawba.

Evans started out coaching linebackers. Now he’s adjusted to being Catawba’s running backs coach, versatility which will be important as he moves forward with his coaching career.

So it’s an exciting time in the Evans household.