‘A place where you want to go:’ Ethan Howard brings back old-school style at Landis Barber Company 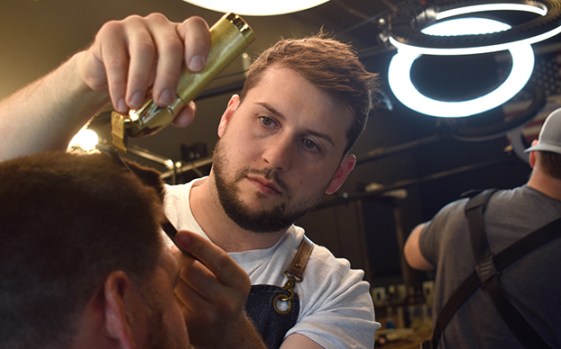 Ethan Howard works on a haircut at the Landis Barber Company, the shop he opened a year ago in an effort to bring back an old-school style of barbershop. Ben Stansell/Salisbury Post 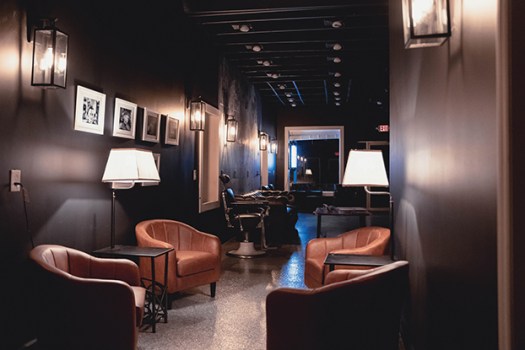 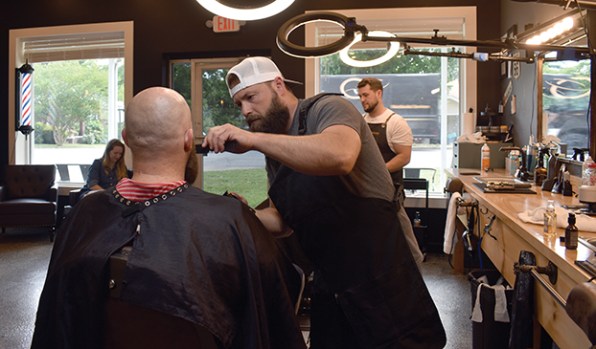 Darrel Howard trims a beard at Landis Barber Company. Ethan recruited Darrel, his brother, to help him at the babershop after he was inundated with clients last summer. Ben Stansell/Salisbury Post 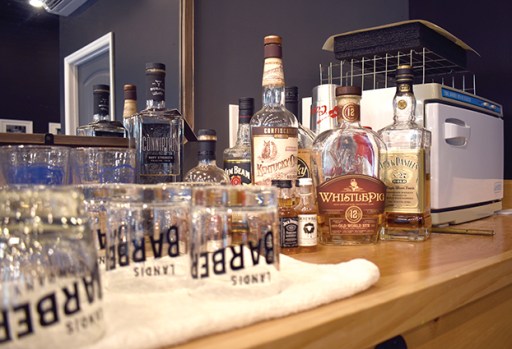 Although the bottles of bourbon and whiskey are mostly for decoration, Ethan Howard had a few Landis Barber Company-branded glasses made just in case. Ben Stansell/Salisbury Post

LANDIS — On his family’s drive back from church every Sunday, 5-year-old Ethan Howard never stopped talking.

“We went to church in Stanly County and we drove from Salisbury to Stanly County,” Ethan said. “It was probably close to an hour and I would sit between my parents’ seats in the backseat and I’d run my mouth.”

One day, Ethan’s mom turned around, looked at him and made a prophetic statement.

“My mom, she said, ‘You never shut your mouth. You’ll make a good barber one day,’” Ethan said.

When Ethan graduated from high school, that’s exactly what he decided to do. He enrolled in barber school in Winston-Salem, graduated and returned to Rowan County to cut hair.

“She totally spoke that into my life and made it happen,” Ethan said.

Over a decade later, Ethan opened a barbershop of his own at 513 S. Chapel St. in Landis. With blues coming from the speakers, customers sitting in old-fashioned chairs and a few bottles of bourbon in the corner, the Landis Barber Company is reminiscent of a barbershop from a time before. That’s exactly how Ethan envisioned it.

“I wanted to bring back what it used to be back in the day, where you wanted to go hang out, maybe take your son or hang out with your buddies,” Ethan said. “A place where you want to go, relax, get a haircut, get a shave.”

Ethan opened the shop in June of 2020, as soon as personal care businesses like barbershops and hair salons were allowed to open during the COVID-19 pandemic. Opening in the midst of the pandemic was nerve-racking.

“After the shutdown, it was kind of a scary deal because everybody was staying at home,” Ethan said. “You didn’t know what was going to happen.”

What happened was Ethan was immediately inundated with customers. Many were carryovers who had been getting their haircut by him at another shop for years. Others were first-timers whose pandemic locks had gotten a little too long.

“I was booked out for a couple of weeks,” Ethan said. “I literally couldn’t keep up. It was fantastic.”

Ethan called in his brother, Darrel Howard, for backup. Darrel is also a licensed barber, but was working as a car painter at the time. It was a reunion of sorts for the brothers, who initially opened a shop in Salisbury about a decade earlier when Ethan had just graduated from barber school. Called Double Edge Barber Shop, the shop was located in a strip mall on Jake Alexander Boulevard and was a far cry from what Ethan’s shop looks like now.

“It was very blank,” Ethan said. “We didn’t have any money, so it was just white walls, chipped up acid-washed floors.”

The Landis Barber Company, which Ethan describes as having a “cigar and bourbon vibe,” has smooth gray floors, slick black walls and large ring lights hanging above each chair that give the room a glow.

The appearance of the shop isn’t the only thing that’s different this time around. Ethan said he’s also discovered the magic of personal branding. He’s dubbed himself as “The Revival Barber,” since he’s revived a barbershop culture from years past. He’s given Darrel the moniker of “The Ramblin’ Barber,” because of Darrel’s past traveling adventures.

“I’ve probably given away hundreds of them,” Ethan said. “They’re everywhere. I had a guy come in the other day who said ‘I didn’t know you had hats. I was down there at Lake Norman and I saw about 10 people with them on.’ ”

Joshua Creswell didn’t need to see a hat to know about Landis Barber Company. Creswell had been getting his hair cut by Ethan for seven years, so he followed him to the new location. It’s where he now goes to see a familiar face, or two.

“As soon as I come in to get my hair cut, I always see somebody who I saw last time,” Creswell said.

“I had a guy come in and hang out for four hours just to avoid mowing his yard,” Ethan said. “He waited for the rain to leave. It was hilarious.”

Although the shop is a haven for men to hang out, it’s also become a haircutting destination for families. Across the room from the line of bourbon bottles is an ever-changing chalk art mural drawn by Courtney Earnhardt, Ethan’s girlfriend. She uses pastel colors to recreate scenes from beloved children’s movies like “Harry Potter” and “The Iron Giant.”

“I think the best thing about this place is that families can come in and then in the evenings it feels like a gentleman’s barber shop,” Earnhardt said.

The chalk murals take about three hours for Earnhardt, an aspiring artist, to complete.

Earnhardt is currently planning a permanent mural for the outside wall of the barbershop.

Whether they’ve come for a haircut or to see some art, “everybody is welcome” at Landis Barber Company. Ethan is always ready with a pair of scissors and an appetite for conversation.

“I guess running my mouth finally paid off,” Ethan said.