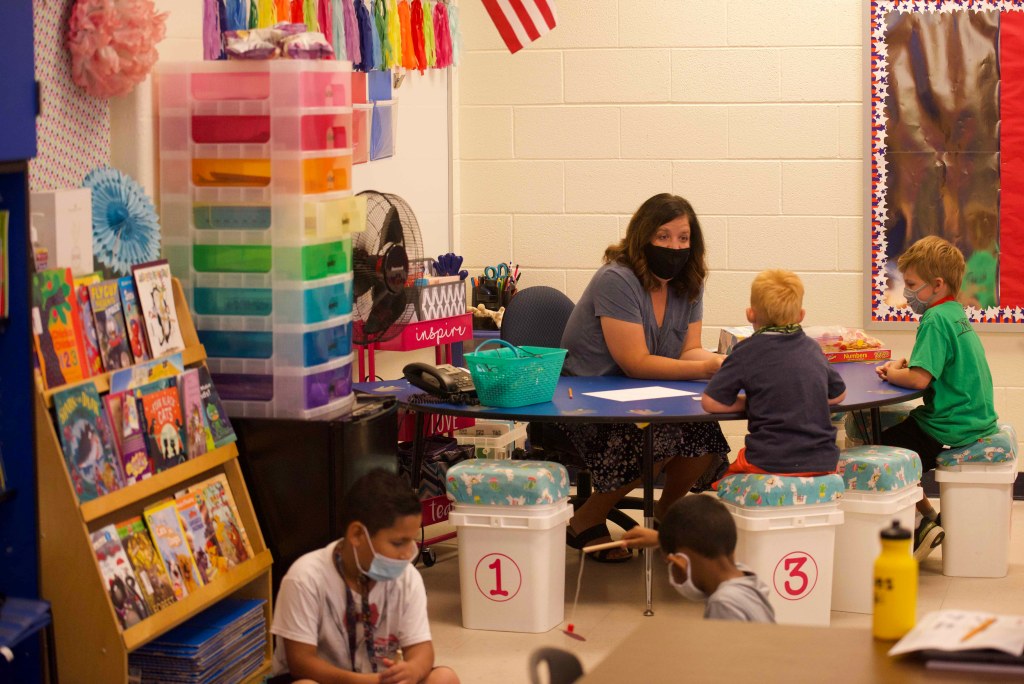 Carl Blankenship/Salisbury Post - Millbridge Kindergarten teacher Lori Webster working with students on number recognition problems. The students each took assessments at the beginning of camp to give teachers an idea of where they needed help.

SALISBURY — This year, Rowan-Salisbury Schools and other districts in the state are hosting the summer school to end all summer school.

Compared to a normal year, the RSS program has doubled in length, from three to six weeks. The number of students has gone from 500 to 2,000, the camps cover more subjects and costs increased to about $2 million. Districts are paying for the expanded programs with federal relief money, and most of the changes were mandated by the state legislature at the close of the regular school year. The goal is to address learning loss resulting from the COVID-19 heading into next school year.

More than 10% of the district’s students will voluntarily participate in the programs, with the voluntary enrollment open to everyone but elementary students. Only at-risk students could enroll in summer programs, said RSS Chief Academic Officer Jason Gardner.

Some parts of camp have not changed. For example, the district has always offered meals and transportation to students who attend summer school. This year, it only needed to prepare more meals and use more buses.

In the past, Gardner said, summer programming focused on getting elementary students on reading level by the third grade as part of the state’s Read to Achieve program. The reason for that focus is that a student not reading on level by third grade is more difficult to get caught up, he said.

This year, there are camps for each grade level through middle school in reading and math. The math and the science camps both include some science education and “enrichment blocks” for problem-based learning. High school students were given credit recovery opportunities and the option to sign up for remediation.

The need for summer programs is heavily focused in the elementary grades. In RSS, 955 students signed up for the math camps and 1,119 signed up for the English camps, which includes some overlap between because some families opted for both.

As kids get older, Gardner said, they get more independent and may attend other summer camps. RSS has some other summer options for kids such as its Horizons Unlimited science camps.

Gardner said the addition of math to the camps for younger students as well as the science lessons have been well received and something the district wants to make a part of future summers.

Webster opted to teach summer school this year because she loves teaching and wanted to make a difference.

“It’s been an unusual year and some of our students have a little bit of a gap,” Webster said.

That gap is called learning loss. Gardner said the district encourages students to keep reading during the summer because of the phenomenon, which results in a small loss of progress between school years. Educators are still researching the extent COVID-19 has set back students.

Teachers are using i-Ready assessments for the first time as part of the camps to assess the math levels of students. The assessments give teachers a detailed look at where each student is in a given subject. They create individualized lessons for the students on their devices.

At Millbridge, teachers had charts for each student so they could track their progress.

Board of Education member Brian Hightower, an Iredell-Statesville Schools teacher, has spoken favorably about the assessments and wanting to adopt them as a standard in the district. The assessments allow teachers to work with each kid on the areas they are struggling with most and tailor the material to them.

In an effort to keep their attention, kids are getting more than constant math and science problems. There is a physical activity block included in the day and activities developed by teachers to keep student interest high.

At Millbridge, there was a beach week, and kids were taking virtual field trips.

Not every change at the camps has been positive. Gardner said the six-week and a 150-hour camp requirement is a bit much because it is difficult to get students to commit to that amount of instruction.

Some families already had family vacations planned, but the district is not turning anyone away if they have to miss a week. Though, missing time could make the camp less effective.

The extended timeline also means the district had to start almost immediately after regular classes ended in May, not giving teachers or students much time off. The camps will run longer into the summer as well.

Gardner credited state representatives for visiting the district recently and asking what was working with the new programs and what was not.

How well are the summer camps working? The district will have a better idea after they end. Students will take an exit assessment in addition to the entrance assessment so RSS will be able to see progress. It is also tracking attendance and the number of credits recovered by high school students.

For Elementary Summer Camp Director Leslie Sechler, this is her first year overseeing the program. Last year’s program was virtual, and she is still just happy to have students back in the buildings. Sechler said she is proud there is summer programming available for any student that wants it

Millbridge second grade teacher Christina Grandt said she is helping with summer school because she’s in her element in the classroom. Some days are hard, but she loves teaching.

Opening night of Faith Fourth of July brings in…