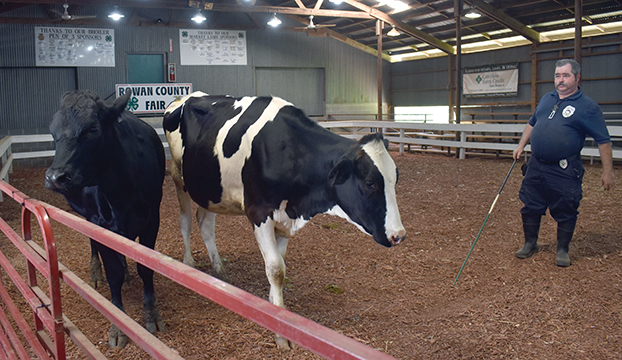 SALISBURY — When animal enforcement officer David Heilig first laid eyes on the three cattle taken into custody by Rowan County Animal Control, they reminded him of another animal.

“They were as skinny as snakes,” Heilig said.

That was in late April, when a female Holstein, a female Angus and a male Simmental cattle were apprehended by animal control while wandering alone near Long Ferry Road. The three animals were significantly plumper when they were auctioned off for a combined $2,400 at the Rowan County Fairgrounds on Wednesday morning. The female Holstein was sold for $900, the female angus for $650 and the male Simmental for $850.

The auctioning of the abandoned cows was mandated by North Carolina General Statute 68-1, which requires the sale of impounded livestock if they are not claimed after proper notice is posted by the local Sheriff’s Office.

“We talked to several people in the area that had cows,” said Bob Pendergrass, animal services director. “Nobody seemed to think they were their cows.”

After the cattle were apprehended by animal control on April 26, they spent the night in the barn of a gracious farmer. They were retrieved the next day and taken to a corral behind the Rowan County Animal Shelter, across the road from the fairgrounds.

Although the county auctions off impounded items from time to time, impounded livestock auctions are more rare. Heilig said they only take place every couple of years, at least.

Kevin McDaniel, a retired Rowan County Sheriff’s Office deputy, was charged with auctioning off the animals. He presided over the bidding from a wooden lectern stationed above the circular corral where the three cows were paraded around. McDaniel has been auctioning off impounded items for the Rowan County Sheriff’s Office for several years and has been an auctioneer for five decades.

The Woodleaf native grew up going to livestock auctions with his family and found himself fascinated by auctioneers who commanded large crowds with rapid-fire elocution. McDaniel, who was a licensed auctioneer in 10 states at one time, learned how to talk fast himself when he attended the Missouri Auction School in Kansas City.

In his decades-long career, McDaniel has auctioned off everything from cows to cars to airplanes. The largest sale he presided over was in Springfield, Missouri, where he governed over a crowd of thousands of bidders and sold off a medical helicopter for over $2 million.

In comparison, the auction at the fairgrounds Wednesday was much more tame. With only about 10 bidders present and three cows up for grabs, the entire affair took less than 15 minutes. The expediency with which the auction proceeded was perfect by McDaniel’s standard.

“When you get people’s attention, you’ve got to keep it,” McDaniel said. “If you drag around, they’ll get uninterested and it won’t happen.” 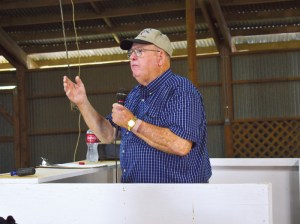 Kevin McDaniel auctions off three cows that were taken into custody and cared for by Rowan County Animal Control. McDaniel has been auctioning off items and animals for five decades. Ben Stansell/Salisbury Post

For the previous two months, animal control employees have tended the animals as if they were their own.

“I’ve been coming up Saturdays and Sundays to water and feed them,” Heilig said. “It’s a lot of upkeep. It’s the right thing for the animals.”

After putting so much time and effort into caring for the cows, Heilig said it will be bittersweet to watch them go.

“We put all of this work into making something look as good as it can look and then somebody else gets the benefit of it,” Heilig said. “But it does make us feel good.”

The cost for caring for the cows tallied $909.80, which covered veterinary expenses, supplies and hay — lots of hay. Heilig estimated that each cow gained roughly 100 pounds under animal control’s care.

“They’d knock you down to get to their food,” Heilig said.

Part of the profit from the auction will go toward reimbursing animal services for the cost for caring for the cows. The county hasn’t yet decided what it will do with the remainder of the money, but Rowan County Finance Director Jim Howden said donating it to charity is an option.

The person who will benefit from the hard work of Heilig and the animal control staff is a single bidder from the Boone area who bought all three cows. The bidder will return in the next few days to pick up his purchase.

Although the winning bidder’s plans for the cows is unknown, Heilig said the female Holstein and female angus could be prime candidates for breeding. McDaniel, who has auctioned off plenty of cows in his day, agreed with that assessment. The male Simmental, McDaniel said, might be a prime candidate for the “freezer,” which is his way of saying steak.