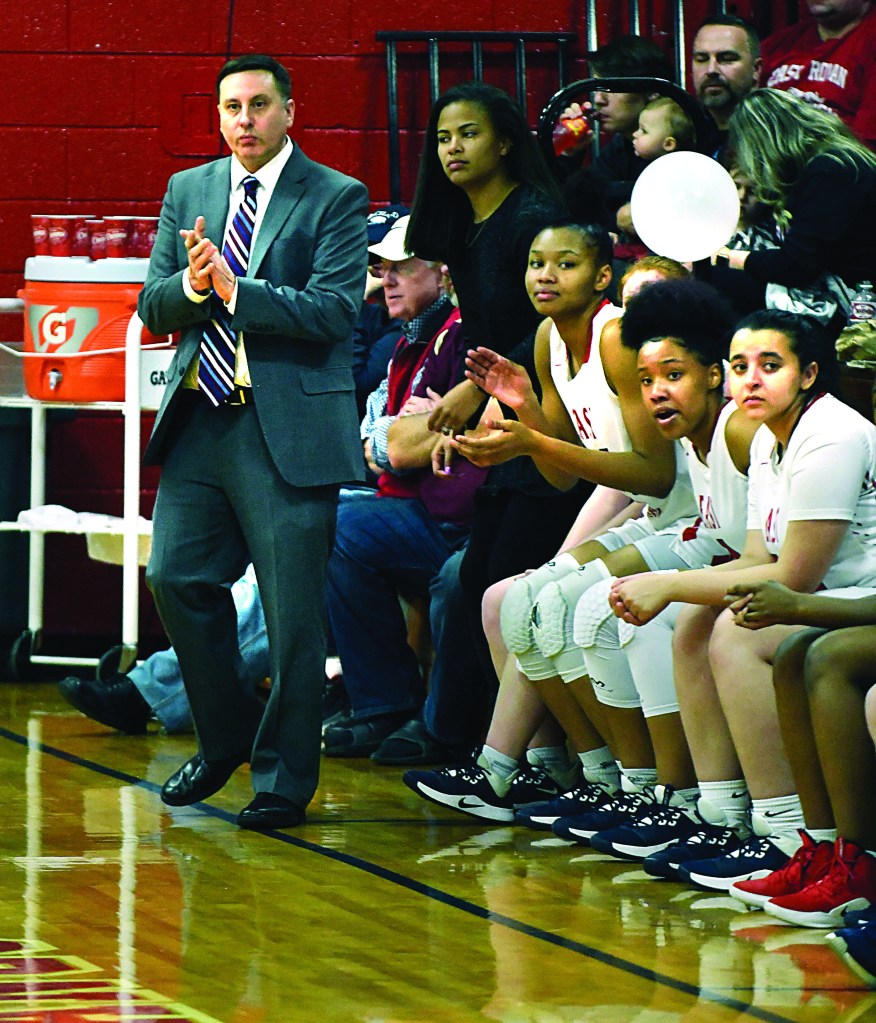 GRANITE QUARRY — The bottom line was 44-71, although those numbers aren’t an accurate reflection of what Kevin Holland accomplished in his five years as East Rowan’s girls basketball coach.

His teams competed hard, conducted themselves well, stayed out of trouble and made a lot of A’s in the classroom.

In most cases, high school coaches don’t get to choose whom they coach, so talent levels fluctuate from year to year. All of Holland’s teams got better. That’s the best measuring stick of whether someone can coach or not.

“I know the history of East Rowan girls basketball, from Jesse Watson to Gina Talbert, and I know about the success that Danielle Porter had not long before I came to East,” Holland said. “I know there’s a bottom line that you can never really escape from, but I don’t know if anyone else had to deal with what I had to deal with in the last five years, especially this past season, which was a strange one for everybody. Overall, I feel very good about what I did at East.”

When East completed its short-handed and COVID-shortened 2021 season with a 1-11 record in mid-February, Holland still had every intention of returning. The worst obviously was behind him. East had played with a senior-less team obliterated by summer transfers. East had played with just one girl (Madie Honeycutt) who had scored in a varsity game in 2019-20.

“The girls competed well,” Holland said. “There were no issues. They improved.”

There was never any pressure on Holland to step down or to make an exit, but things lined up him to make a move over the last few months.

The Holland family had always enjoyed beach vacations, and there had been discussions for years about eventually relocating to the coast. The COVID year accelerated those family talks. Dreams became reality.

“More than anything this past year taught us not to put things off because you never know if you’ll get the chance to actually do them,” said Holland, who has been teaching U.S. history to East sophomores and juniors. “When everything was shut down, it really hit home that we can’t take tomorrow for granted. I started looking into job opportunities on the coast, to get the family moved down there. I was prepared not to coach basketball next year. My goal was to land a teaching job.”

West Brunswick, basically the small town of Shallotte and the seaside community of Ocean Isle Beach, was one of the places at which Holland applied and was granted an interview. When the school hired him as a social studies teacher, it also encouraged him to apply for the girls basketball coaching job which wasn’t posted, but was coming open.

Holland was also hired to take on that task.

“It all fell into place quickly, and it’s a great gig, teaching and coaching on the coast,” Holland said. “My wife’s family is moving down there with us, and we’ll also be a lot closer to my dad than we are now.”

The basketball end of things is going to be challenging.

West Brunswick will play in a split 3A/4A conference where the majority of the schools will be Wilmington 4A schools. The three 3As in the league will be the Brunswicks — West Brunswick, South Brunswick and North Brunswick.

“We’ll set higher goals, but basically to make the playoffs, we’ll need to be the best team in Brunswick County,” Holland said. “That won’t be easy, but it can be done. They’ve had a pretty rough go of things there in recent years. They’ve had coaching changes. They’ve been playing against Ashley’s Saniya Rivers (a McDonald’s All-American), among others. But I think I can bring that program the same sort of consistency and stability I brought to East.”

When Holland arrived at East for the 2015-16 season, the Mustangs were basically starting over, after losing all five starters. They returned reserves Hollie Harrison and Courtney Wagner, and Holland put together a team that was sparked by freshman Adalie Harrison. East was 4-20. There were rough nights in the South Piedmont Conference, trying to compete with Carson, West Rowan, South Rowan, Hickory Ridge, Central Cabarrus and Cox Mill. East went 1-17 in the SPC.

Holland’s second season, with an injury-depleted roster, was basically a repeat, although East was starting to construct a foundation around the sophomore core of Adalie Harrison, Caroline Houpe and Grace Eagle. The Mustangs were 5-20. The last victory came in the fifth-place game in the Christmas tournament. East went 0-10 in a North Piedmont Conference that featured good Carson, West Rowan, North Iredell, Statesville and South Iredell squads.

East made a jump to 14-13 in Holland’s third season, although the Mustangs were still only 1-9 in the NPC.

“You look at the seven games we lost that season and it’s Carson, Salisbury, West Rowan and Hickory,” Holland said. “Only the really good teams beat us. We were right there.”

Adalie Harrison graduated as a 1,000-point scorer. Houpe and Eagle also got the opportunity to play basketball past high school.

“I only had nine seniors in five seasons, and four got the chance to play in college,” Holland said.

Now Holland moves on. He has nothing but positive things to say about his time at East. He thanked the administration, the community, and the girls who played for him.

East’s program is deeper and stronger now than when he arrived. That’s what every departing coach hopes for.

“It’s not like I had to leave,”  Holland said. “But the ocean has always been such a happy place for my family,”

East has announced that it is promoting from within the program. Former Catawba College star Bri Johnson Evans will be replacing Holland. That story is upcoming.