With theft on the rise, city staff ask public to stop plucking plants from Hurley Park 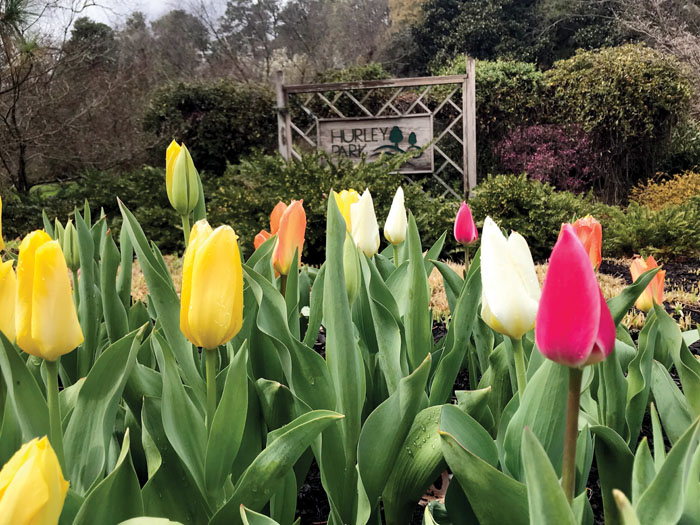 Once plants have been planted, Hurley Park typically sees theft increase since it is easier to remove the newly planted items. The park always gives away tulips after they have bloomed so there is no need to steal them.

SALISBURY — City staff are calling on the Salisbury community to get the word out and deter against plant stealing at Hurley Park.

On June 24, the city made its debut on the social media platform TikTok with a message: stop stealing plants from Hurley Park. Parks and Recreation Director Nick Aceves told the Post theft has been a recurring issue, but it has escalated recently.

“It’s very disappointing,” he said. “They’re out there on their hands and knees planting those plants, and a lot of time, weeding with their bare hands.”

Hurley Park Manager Danelle Cutting said a rise in stolen plants is typically seen following the installation of new ones or during blooming season. It’s hard to quantify how many have been stolen since she began four years ago, but she estimates it’s in the hundreds. She recalls once planting a group of lavender plants only to have the whole group pulled from the roots shortly after.

Each year, anywhere from $500 to $1,000 is budgeted to replace plants. But that money doesn’t go far enough to fully replace the ones at the end of their life, and trees in particular are even more costly.

“We do plant unique specimens that you can’t necessarily get at your local box store, and not always at your local nursery,” Cutting said. “We have to source them from other places.”

Hurley Park also faces a challenge in that it’s half-funded by the city, with the other half raised from the Hurley Park Foundation. If natural disasters occur, plant replacements are often put off for another year, Cutting said.

Before the pandemic, the park was working to replace many of the fruit orchards that were already on the decline. Fruit trees often have an estimated 18-year life expectancy, Cutting said.

Cutting and Aceves said it’s even more disappointing to see the thefts because some of the park’s plants such as its tulips are often given away annually and at city events. Therefore, park staff are happy to provide plants and cuttings if visitors ask, she said.

“There’s no need to steal plants,” Cutting said. “We can give them away for free as long as they talk to us.”

In addition to the stolen plants and flowers, Aceves said the city is also battling a rise in litter across the city’s parks. In April, the Salisbury Planning Board approved a rezoning request for several parcels at the park in preparation of a new centralized office building. Aceves said the new office will increase staff’s presence and hopefully curtail some of the stealing and littering. Currently, the park has some cameras that can be relocated as needed, but it’s still not “fool-proof,” Aceves said.

Cutting and Aceves encourage anyone who witnesses theft at any of the city’s parks to report the incident to Salisbury Police or inform park staff. The city’s Park and Recreation Department can be reached at 704-638-5291.