Legion baseball: Rogers back in the swing of things 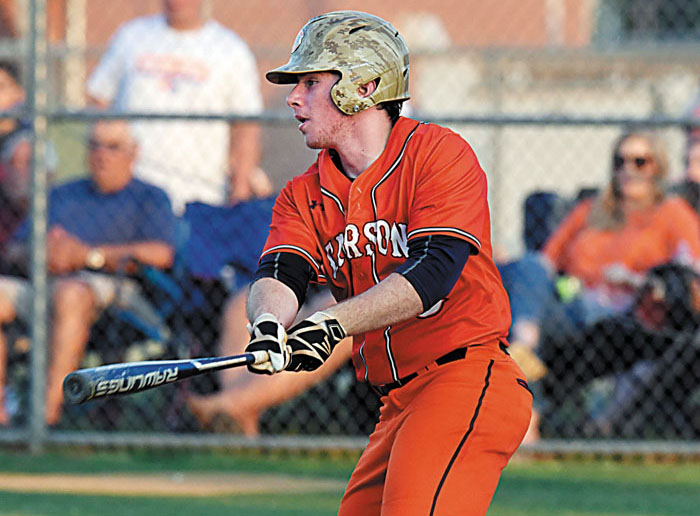 Carson's Logan Rogers gets a hit during a game against Marvin Ridge in 2019 . photo by Wayne Hinshaw, for the Salisbury Post

GRANITE QUARRY — Logan Rogers has been a two-way baseball player for a while, but the Carson graduate was 3-0 with a 0.66 ERA for the Rowan County NC3 team last summer and headed to Southeastern Community College with the idea of concentrating on his developing pitching career.

That made sense. Rogers bats right-handed, but he throws left-handed. Lefty pitchers are always in demand.

In a long junior college season that began in late January and ran into May, Rogers was limited to one inning in March.

“I had an arm injury in the spring,” Rogers said. “So I had to change my focus to hitting.”

It took a while to work his way into the lineup, primarily as Southeastern’s left fielder.

“My speed was an issue at first, but I lost 30 pounds and got faster,” Rogers said.

Hitting wasn’t much of an issue.

He always hit well for Carson and was batting .471 when his senior season was stopped by COVID after six games.

He closed his freshman season at Southeastern with an awesome spree at the plate. He had 12 hits in his last 16 at-bats to lift his final batting average to .372. He hit one homer and drove in 21 runs.

When this belated American Legion season finally began, he got off to a solid start for Rowan County.

“The pitching, in general, has not been as tough as what I was seeing at Southeastern,” Rogers said.

Rogers is also going to pitch some for Rowan. He fanned six batters in a hurry in relief in the win against Stokes County.

But like just about everyone on the team, Rogers struggled in the 8-1 loss at Davidson County on Saturday.

“I didn’t have great at-bats in that game so I really wanted to do better Sunday when we played Mocksville,” Rogers said. “I wanted to do a better job of driving in runs.”

He accomplished that with one of the best five-inning games in Legion history. He tripled to score a run in the first inning. Then, he hit an opposite-field homer leading off the third inning. Homers to right field by right-handed hitters are pretty rare at Staton Field.

“I was looking away, got an outside fastball and went with the pitch,” Rogers said.

Rogers, who played first base, got to the plate again in the fourth inning and launched a grand slam to left-center.

“That second homer was on an inside changeup,” Rogers said.

Powered by Rogers’ explosive night, Rowan won 10-0 by the 10-run rule in five innings. Obviously, as the home team, Rowan only got to swing in four innings. Rogers still had 11 total bases and six RBIs. Now he’s 7-for-13 for the season.

Carson graduate and Catawba recruit Dylan Driver co-starred with Rogers. Driver got help from a first-inning double play, worked out of one jam and threw a three-hit shutout. His best two innings were the last two.

“Dylan kept the ball down and pitched great and we made the plays behind him,” Rogers said. “The whole team played a lot better.”

Rowan is scheduled to host Mooresville on Thursday.