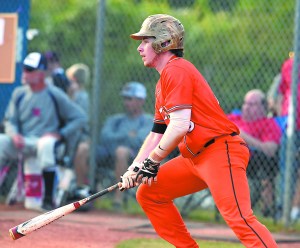 Logan Rogers. Photo by Wayne Hinshaw, for the Salisbury Post.

Rowan put Saturday’s loss at Davidson County in the rear-view mirror by pounding Mocksville 10-0 in a game shortened to five innings by the 10-run rule.

It was the Southern Division opener for both teams.

Logan Rogers had a monster game with a triple, two homers and six RBIs. His second homer was a fourth-inning grand slam that put away Mocksville (1-6, 0-1).

Driver (1-0) got some early help from Rowan’s defense and stayed in control on the mound.

Rowan’s next scheduled game is against Mooresville on Thursday.