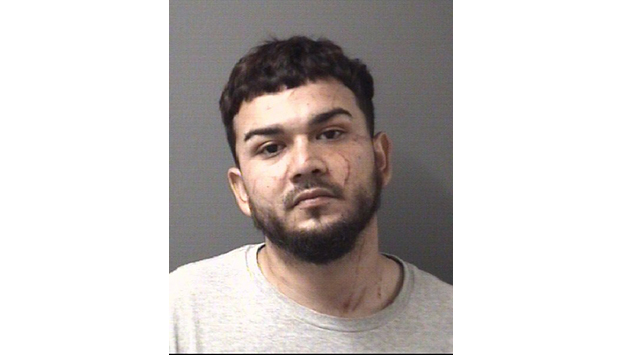 SALISBURY — A Charlotte man faces charges of assault with a deadly weapon after allegedly throwing a kitchen knife at a woman and hitting her in the head.

Nathan Robert Guerrero, 24, was charged by the Salisbury Police Department Saturday with felony assault with a deadly weapon inflicting serious injury for assaulting a woman with a knife in a home on the 600 block of Elm Street.

Guerrero drove the victim to Atrium Health Cabarrus. She arrived with the kitchen knife sticking out of her head, according to a warrant. Concord Police said the victim initially reported she was cutting a watermelon at her house when she slipped and the knife stuck into her head. A warrant states Guerrero and the woman actually were fighting over Wi-Fi at the Elm Street home. The argument led to Guerrero throwing a knife at her head, warrants state.

Physical domestic issues often happen between Guerrero and the victim, according to warrants.

Police arrived at the Elm Street home around 2 p.m. Saturday after receiving a notification from Concord Police. Salisbury Police called its Special Response Team because children were inside the home and Guerrero wouldn’t respond or exit the home. He surrendered before the Special Response Team arrived.

Guerrero was booked into the Rowan County Detention Center without a bond.

The woman is expected to be OK.

• Jeremy Allen Smith, 37, of Carroll County, Virginia, was charged by the Rowan County Sheriff’s Office Friday with five counts of breaking or entering a motor vehicle, four counts of misdemeanor injury to personal property and one count of misdemeanor larceny. Smith allegedly broke into five different vehicles in Rowan County, including two vehicles in Salisbury and three in the Gold Hill area. Smith allegedly damaged the dash of four vehicles and stole a vehicle radio from one, according to a warrant. He also was charged by the Stanly County Sheriff’s Office with felony larceny of a motor vehicle for stealing a Dodge dump truck. Smith was issued a $32,000 bond.

• Damon Antone Cotton Jr., 29, of Salisbury was charged by the Salisbury Police Department Friday with possession of a firearm by a felon and carrying a concealed gun. Cotton was allegedly in possession of a 9MM Hi-Point C9. He was issued a $15,000 bond.

• Jacquavius Raquan Whisonant, 24, of Salisbury was charged by the Rowan County Sheriff’s Office Saturday with felony interfering with a prison fire system and misdemeanor injury to personal property for allegedly destroying a sprinkler head in the Rowan County Detention Center. Whisonant was previously charged with assault on a female, breaking and entering and trespassing.

• Adrian Angel Garcia, 33, of Salisbury was charged by the Rowan County Sheriff’s Office Friday for misdemeanor assault on a female and misdemeanor resisting public officer for an incident that occurred in October. Garcia allegedly hit a victim on the cheek and chest area. When a deputy attempted to arrest Garcia for assault, he’s accused of fleeing on foot.

• Brandon Lee Lakey, 28, was charged by the Rowan County Sheriff’s Office Friday with felony possession of a stolen motor vehicle.

• Cody Matthew Bigby, 22, of Cabarrus County was charged by the Rowan County Sheriff’s Office Friday with felony possession of a stolen motor vehicle.