‘Opportunity you don’t want to miss’: Hundreds turn out for job fair at West End Plaza 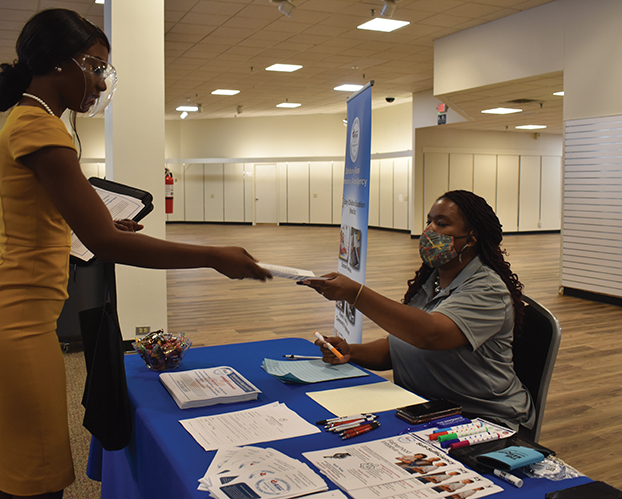 Heavenly Robinson, a recent college graduate, was one of hundreds who attended the Rowan County Job Fair on Saturday. One employer she visited was Salisbury-Rowan Community Action Agency, where she spoke with Stephanie Durham. Ben Stansell/Salisbury Post

SALISBURY — When Noreen Nelson woke up on Saturday morning, she already had her day planned out.

“It was earmarked,” Nelson said. “I knew I was getting up this morning and coming here.”

Nelson was one of hundreds of people who filtered through the event center at West End Plaza on Saturday during the Rowan County Job Fair. The fair was held by the Rowan Economic Development Commission and other partners to give local employers a chance to connect directly with potential employees.

“Our community truly came together to answer the call around our employer’s dire need for new talent and filling crucial vacancies within their operations,” said Kendall Henderson, director of business development at the Rowan EDC. “With over 50 employers offering wonderful career opportunities and north of 250 candidates in attendance, we feel that we more than answered that call.”

A line of participants in the fair started to form even before the doors of West End Plaza opened.

“We had people lining up outside before 10 a.m. So, it’s really exciting how many participants are here,” said Elaine Spalding, president of the Rowan County Chamber of Commerce.

About 50 companies attended, representing many sectors of industry, including homebuilders, fast food chains, schools, law enforcement and health care agencies. Large employers like Chewy, Snow Joe and Daimler attended. So did government employers such as the city of Salisbury and the Rowan County Sheriff’s Office. Job seekers perused a sea of tables featuring bags of candy, fruit, company-stamped frisbees, plastic bottles and more.

Nelson was there looking for more than just giveaways — she was searching for an opportunity.

“When you get job fairs like this, you actually get to see ‘Oh, I need to go see that one. I didn’t know they were hiring.’ It might be something you really want,” Nelson said. “This is an opportunity you don’t really want to miss.”

Nelson said she’s searched for about six months, but had trouble finding an employer that offers shifts fitting her schedule. The job fair may have helped her overcome that challenge. 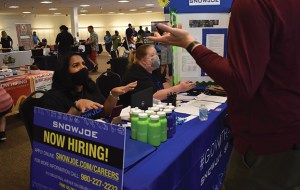 For Micah Doan, who recently moved to the Salisbury area, the fair was his way of getting back on the job hunt. Doan has a background in the plumbing industry and was looking for something similar on Saturday.

“A practical job that I can use later in life, say the construction of objects,” Doan said.

“In the past, folks would come to us,” Kirkman said. “It doesn’t really happen that way anymore.”

With more than a dozen open positions, the company has been forced to get more creative and aggressive with its recruiting tactics, including using employment sites like Indeed.com or putting up billboards.

“Those were ways that, not too long ago, we didn’t even think of,” Kirkman said. “We’re trying to think outside of the box.”

Like many employers, Kirkman said Clayton Homes Rockwell has increased its pay twice in the previous three years in hopes of attracting new employees in an increasingly competitive job market.

Kirkman said he was encouraged by the number of people who attended the event.

“With what we saw earlier where the line was out the door, I think people are eager to see what’s out there,” Kirkman said.

Clayton Homes Rockwell isn’t the only local employer who was at the fair looking to fill numerous vacancies. Dawn Dandridge, who works under the title of “people champion” for six local McDonald’s franchises, said the company is currently looking for an “unlimited” number of employees.

Dandridge chalked the company’s difficulty finding employees up to a variety of factors, including the COVID-19 pandemic, stimulus checks and unemployment benefits.

To fill open positions, McDonald’s has had to adjust its recruitment tactics.

“Everything is focused on people now,” Dandridge said. “That’s been the No. 1 focus this year, where in past years it might have been on something else.” 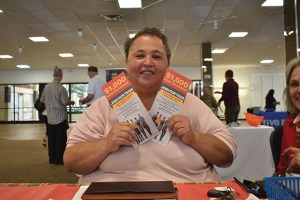 In addition to offering $250 a month in free food and tuition assistance, McDonald’s is hoping to recruit new talent with up to $1,000 signing bonuses. Those sweeteners appeared to have worked on Saturday. Less than two hours into the fair, Dandridge said the company had already hired three employees on the spot.

“Many Rowan County residents came away from today’s event with job offers and generous sign-on bonuses in hand,” Henderson said. “That was our goal.”