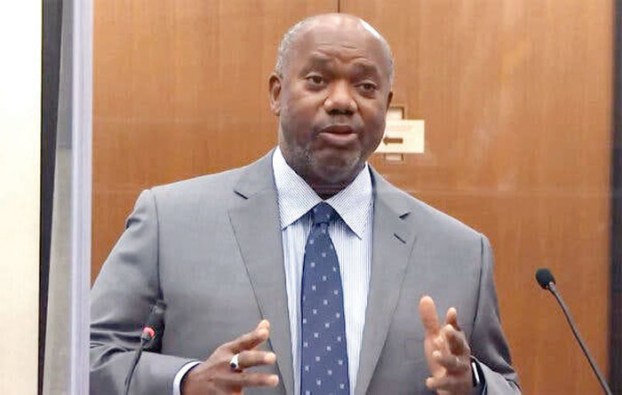 Courtesy Photo — Kannapolis native Jerry Blackwell, an attorney, led the prosecution against former Minneapolis Police Officer Derek Chauvin, who was sentenced to 22 years in prison Friday, June 25, 2021, for the killing of George Floyd in the summer of 2020.

KANNAPOLIS — April 20 will go down in history as the day ex-Minneapolis Police officer Derek Chauvin was convicted of murder and manslaughter in the killing of George Floyd.

Kannapolis native Jerry Blackwell will be credited as a lawyer who helped do it.

Blackwell, 59, is a graduate of A. L. Brown High School and UNC-Chapel Hill who has his own trial firm in Minneapolis. His move there from North Carolina was inspired by a New York Times story detailing the Bhopal gas tragedy in India that killed more than 16,000 people in 1984. Blackwell joined the firm in Minneapolis that was defending the victims. Then in 2006, Blackwell founded Blackwell-Burke P.A., where he’s practiced ever since.

Following the death of Floyd on May 25, 2020, Minnesota Attorney General Keith Ellison called on Blackwell to join the prosecution in the case against Chauvin. Despite having no criminal trial background, Blackwell’s decades of litigating complex civil issues in corporate law and his reputation led Ellison to call on the Kannapolis native to join the case on a pro bono basis, meaning that he wouldn’t be paid for his services.

Blackwell expected to work behind-the-scenes but was soon promoted to special prosecutor and joined by Steve Schleicher as co-counsel and other colleagues from the Blackwell-Burke firm. The trial initially included all four officers involved, but COVID-19 restrictions separated Chauvin from the other three, whose trials begin in March. Blackwell will also be a prosecuting attorney for those officers.

Blackwell was forced to draw on his experience representing Fortune 500 companies in complex civil cases. He was also Prince’s lawyer (yes, that Prince).

After watching the video depicting Floyd’s death, Blackwell said his decision to involve himself in the case was reflexive.

“When I saw that video … it activated something in the DNA that just says, ‘You know what you must do,'” Blackwell said. “You must do it without any thought for ultimately how it impacts you. No thought for practicality. No thought for safety. This is a calling.”

Blackwell said his biggest reason for joining the case was being a Black man in America. Despite his well-established career and firm, he’s still had very few, if any, positive encounters with the police.

“It’s been here in Minnesota and North Carolina where I’ve been stopped for no reason,” Blackwell said. “Where officers would be gratuitously nasty, which to me is a form of violence, too. And I always felt it was to escalate it … to get you to say something that would justify a further brutality. And then seeing how this sort of a violent thing plays itself out in a completely mortal way — to the point of a man’s death in broad daylight — just sets me to the core.

“And my thought was that whether the prosecution win, whether we lose flat out with the jury, or whether the jury is hung, the fight itself was more important than outcome of the fight.”

Blackwell’s belief in America’s ideals of justice and due process also fueled his determination. In such a high-profile case, with landmark implications, Blackwell said strategic preparation and care had to be made to prevent any implicit biases and his own personal passions from interfering. He found it important to emphasize to jurors that the trial wasn’t “an indictment of policing” and that his team embraced the badge and good policing.

“This trial was about Derek Chauvin and what he did on this particular day, over this particular time period,” Blackwell said. “And whether it caused improperly a man’s death.”

Despite being compelled to join the case, Blackwell said there were still risks to consider. In addition to his own reputation and relationships built throughout his decades of practice, nearly 40 families depended on his firm’s viability to support themselves.

Though Blackwell recalls the painfully long wait for the verdict delivery, he also didn’t walk away delighted that Chauvin would be “shipped off to a human warehouse to have years of his life just melt away.”

Blackwell visited Floyd’s family and loved ones each day of the trial. He recalls being struck by their decency despite the tragedy they were enduring. Blackwell said they only wanted a verdict that showed Perry, as they called him, mattered.

Though the trial is not the end-all-be-all case for race and policing in America, Blackwell says he hopes it can inspire police officers to stand up against bad policing because it’s “in the best interest of good policing.” Additionally, he hopes the case gives rise to reforms such as registries of officers who engage in misconduct and requiring more extensive training for law enforcement officers. Blackwell said he hopes Americans feel encouraged about the rule of law and a democracy that includes everyone.

Even still, he hopes Chauvin can find the light inside his heart.

“My hope is that the conviction and whatever time Mr. Chauvin spends in jail will light the lamp of humanity that I hope is somewhere in his heart, too, that just wasn’t lit on that fateful day.”

‘Opportunity you don’t want to miss’: Hundreds turn out for job fair at West End Plaza

SALISBURY — When Noreen Nelson woke up on Saturday morning, she already had her day planned out. “It was earmarked,”... read more