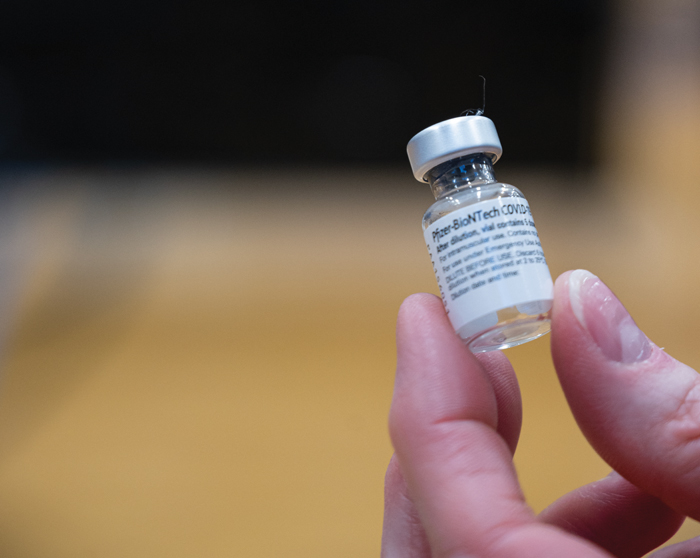 A vial of the Pfizer COVID-19 vaccine, which is being administered at the JF Hurley Family YMCA in Salisbury.

Maybe the White House knows better than a newspaper editor, but rallying in Raleigh seems largely ineffective in trying to get more people vaccinated for COVID-19.

Yes, North Carolina is lagging behind other states, but the problem isn’t Raleigh, which is in one of the most-vaccinated counties in the state. About 54% of Americans are fully vaccinated — a number boosted significantly by highly vaccinated states in the Northeast and the West. Meanwhile, Wake County, where Raleigh sits, is 58% fully vaccinated. The state average is 42%.

Places like Rowan County are still in the low-to-mid 30% range for full vaccinations. In eastern counties like Onslow and Hoke, the North Carolina Department of Health and Human Services reports just 21% and 20% of people fully vaccinated. Those are counties where extra attention is needed, not ones where most residents lean liberal, have a college degree and are more likely to actively seek COVID-19 vaccinations.

It was good that Biden spoke at the Green Road Community Center in Raleigh where there’s a below-average vaccination rate. It’s also in an area that scores high on the state’s social vulnerability index, which measures things like whether residents are proficient in English and have a vehicle.

But the News & Observer reported the few hundred people in attendance were mostly volunteers and frontline workers from nonprofits that have been administering vaccines in the Triangle. Biden was talking to people who are likely to agree with his message, and he knows this. The Associated Press reported Biden said he was “preaching to the choir.”

If the country hopes to ever vaccinate a large enough portion of its population to stop COVID-19, the advocacy needs to be directed toward people who are not inclined to do so, procrastinators and those who still have questions.

A presidential visit probably isn’t going to work in a county like Rowan or any number of other heavily Republican counties. People not inclined to receive a vaccine aren’t going to attend a large indoor rally about vaccinations. For the safety of attendees, it’s probably best that they don’t, but there are plenty of other ways to shift the vaccination strategy toward more helpful endeavors.

Communication options in the 21st century are good, but that can’t be the only method. People will scroll past ads on Facebook, other social media platforms and websites. TV ads are only going to reach people who have subscriptions and are watching a channel at the right moment. Scheduling vaccination events is only helpful if people walk in the door of those events, and health officials have basically given up on hosting public events.

To be successful, the state’s vaccination campaign needs to take an approach similar to a hotly contested political contest — complete with door-knocking, canvassing and phone calls. Get permission from Food Lion, Walmart and places with high traffic to set up tables at the entrance. Those doing the advocacy will have to engage in uncomfortable conversations with people who might give them a cold shoulder. It’ll be comical for anti-vaxxers. If public health workers do it right, people might get annoyed with the degree to which they’re told about the importance of getting the shot. But we’re trying to stop a global pandemic that was the third-leading cause of death last year. Successful political campaigns do not stop after a few months.

Let’s work to prevent the same thing from happening across the whole state.