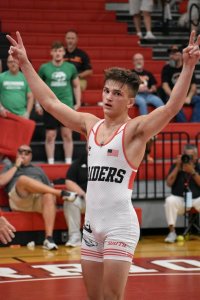 Bost (26-1) lost only once this season at 160 and ruled his weight class on Saturday.

Prognosticators listed Cox and Bost as leading contenders to take their respective brackets, but both faced minefields full of potential problems.

Competing at Wheatmore High in Trinity, Cox won by pin and major decision to get to the semifinals. That’s where he faced Trinity’s David Makupson, who came into the match undefeated for the season. Cox won by pin.

That set up a showdown for the title that was one of the most anticipated matches of the championships — Cox against the weight class’ defending champion, Louis Mehaffey of Pisgah, another unbeaten wrestler. Cox took the championship with a 5-4 decision.

Competing at Eastern Guilford High in Gibsonville, Bost sailed through the first two rounds, as expected, with a 17-1 technical fall and a 10-0 major decision.

The semifinals were expected to provide his toughest test. That’s where he faced Enka’s unbeaten Tony Torres.

Bost handled Torres in a 7-1 decision, and then won 7-1 in the finals against Chapel Hill’s Alexander Gunning, who finished 27-2.

Bost had placed third at 152 pounds in 2020. He had made his first appearance in the state championships as a sophomore, wrestling at 145 in 2019.

A number of Rowan wrestlers challenged for titles.

East Rowan’s Tayron Frost lost a 9-4 decision to A.L. Brown’s Gavin Hartsell in the 3A championship match at 182.

Frost helped East finish fifth in the 3A team scores.

Salisbury’s Michael Lowry also reached the finals. He lost by pin in the 2A 145 final, but he helped the Hornets finish seventh in the 2A team scoring.

Salisbury’s Javon White lost in the 2A 120 semifinals but bounced back to register a pin in the match for third place.

Davie’s Jack Jarvis won the 4A state championship at 170 to complete and undefeated season.