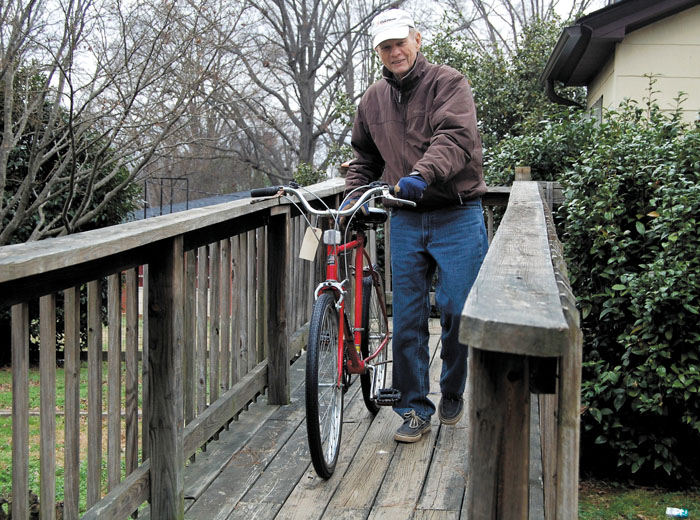 Sarah Campbell / Salisbury Post Former Spencer mayor Buddy Gettys, president of the Spencer Citivans, rolls a bike down the ramp at the rental home of Spencer Presbyterian Church before loading it into the back of his truck to deliver to North Rowan's elementary and middle schools On Dec. 12, 2011..

SPENCER — Randy Gettys says his dad, Edgar Walter “Buddy” Gettys, saw Spencer as a microcosm of what this country should be.

Buddy, a progressive-minded person, always enjoyed living in a diverse place and was a proponent of desegregation in the ’60s. Randy said his father knew it was the right thing to do.

“He believed in the way of life in the Spencer, East Spencer and North Rowan community,” Randy said.

Professionally, Buddy was an electrical engineer, but he was a constant force in Spencer’s civic world. He was elected mayor in Spencer five times, serving from 1991 to 2002, until he was unseated by Jody Everhart in a contested election.

Buddy died on Wednesday at age 84 after a period of declining health. His funeral was held on Friday.

When Buddy was chair of the planning board, Randy remembers going to meetings and being interested in civics as a kid. Randy would serve on the historic preservation commission and take after his dad in 2005, winning a seat on the town board and serving as mayor pro tem until 2007. Unlike his dad, Randy did not take a liking to it and decided not to run again.

Buddy was also heavily involved in Jaycees. He was an active member of and worked on projects based at Spencer Presbyterian Church. He was an active supporter of the North Rowan-area schools and instrumental in the preservation of what become the Stanback Educational Forest.

Randy said his father was practical to a fault and not one to relax in front of the TV. He always had a project, and people who knew him described him as “feisty.”

“Everything was a project, and everything should be pulling in the right direction,” Randy said.

In the ’80s, Buddy got fired up about the curriculum at North Rowan High not offering college credit courses available at other high schools in the county. He got in touch with another notable Rowan County native, Albert Stout, and they started a campaign that took years to get the same course offerings for kids at North.

Spencer Mayor Pro Tem Patti Secreast knew Buddy since high school. Secreast said he was one of her heroes and a reason she became interested in public service. She described Buddy as a good friend and listener, that he was always working on a project and devoted to his wife, Martha, and family.

Secreast attends Spencer Presbyterian Church, too. She remembers Buddy’s involvement resulting in the church’s best period of membership and activity. She worked with projects with him at the church and in the community.

“He was a wonderful Christian servant,” Secreast said.

She also remembered when he was presented with the Order of the Long Leaf Pine at the church. It’s one of the highest awards given by North Carolina’s governor.

Spencer Police Chief Mike James started shortly after Buddy’s last term as mayor, but he still knew him, enjoyed speaking to him and sometimes saw him at Richard’s Barbecue.

“He loved this town and gave a lot of his life to it,” James said.

Buddy is survived by Martha, Randy and wife Sara, son Ryan and wife Paula as well as grandchildren Stefan, Maggie and Spencer. He has one great-grandchild, Grahm.