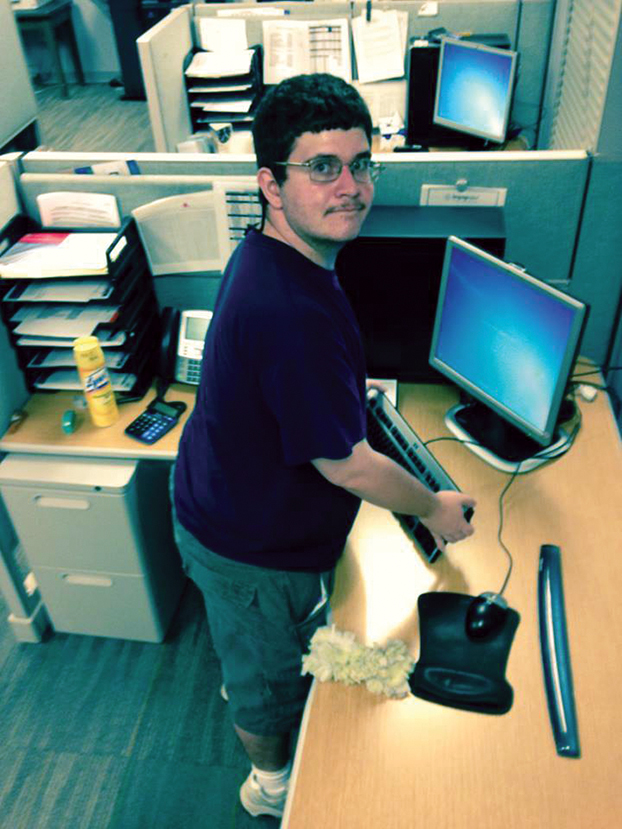 Eric Yohman working to clean an office space for Blue-J. He was the first individual with autism hired by the company. Blue-J will now be handling cleaning services for the town of Landis. Photo submitted.

LANDIS — When Janet Schultz started Blue-J Cleaning Solutions in 2012, she had no intentions of doing anything besides running a successful cleaning company.

A year into the endeavor, that changed.

Having a tough time hiring dependable employees, Schultz looked in a different direction.

“When it was difficult to find people to work and do so in a manner I outlined for them, it just became apparent that I needed to look at persons on the spectrum,” Schultz said.

Before launching the company, Schultz worked as a special education teacher in Stanly, Cabarrus and Mecklenburg Counties. Therefore, she knew exactly what someone with developmental differences such as autism could bring to the job.

For the past decade, Blue-J Cleaning Solutions has provided gainful employment to people with Autism Spectrum Disorder while growing its business in and around the Concord area. The company, which also uses only all-natural cleaning products, specializes in cleaning churches, offices and salons.

“It has really broken down barriers,” Schultz said. “There’s always exceptions, but they are few and far between.”

The company has recently expanded into Rowan County and will provide cleaning services for the town of Landis starting next month. Blue-J will be responsible for cleaning the town’s municipal buildings, including Town Hall, the Police Department, Public Works and the board room.

“We also believe that the benefit of going with a company that is designed around what some people consider to be a special need, we in this situation believe it to be a special benefit,” Landis Town Manager Diane Seaford said. “Folks with autism tend to have a gift to be able to really focus on what they’re doing and focus on the details. Cleaning is an example of where that would be a huge benefit and we believe they’re going to do a great job with our facilities.”

Blue-J doesn’t exclusively hire people with developmental differences, but Schultz has provided many adults with autism with a first chance at employment.

“Every single one of them that have worked for me or are working for me now, this is their first job because they couldn’t have gotten a job anywhere else,” Schultz said. 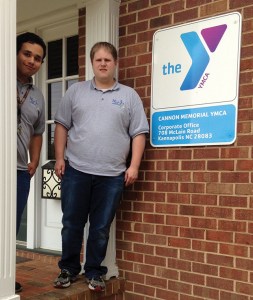 Xavier and Tommy stand outside of a the YMCA office in Kannapolis, a building they cleaned for Blue-J Cleaning Solutions. Both have gone on to hold full-time jobs elsewhere. Photo submitted.

“Oftentimes, people looking for a job work their network. They connect with friends, family, other folks like that and they’re able to describe what they might want to do, or they’re able to work those connections to ask for help,” said David Laxton, director of communications for the Autism Society of North Carolina. “That’s not always something that always comes naturally for adults with intellectual or developmental disabilities or autism. The social aspect of the job might be a little bit more difficult.”

Another reason why the percentage of unemployed people with disabilities is so high, Schultz said, is the prevalence of negative and inaccurate stereotypes that depict them as lazy or incapable. Shattering those stigmas is at the forefront of Blue-J’s mission.

The first individual with autism who Schultz employed in 2013 was Eric Yohman, who she said was a home run hire.

“Eric took his job extremely seriously and he blew everybody away,” Schultz said.

When Yohman wasn’t able to get a ride from a family member to get to work, he found other ways.

“Eric was so determined to get to work — he couldn’t drive and his mother was sick — he took the bus,” Schultz said. “That surprised everybody that Eric could go on the internet, look up the bus route, figure out which bus to take and switch buses a couple times. He even brought the vacuum cleaner on the bus with him. That’s how determined he was.”

While Schultz said she strives to ensure that Blue-J is a safe place for people with developmental differences to work, she also makes sure that they have the same expectations as every employee.

“I treat them just like I would anyone else,” Schultz said. “They get no special treatment, no favors, so they have to prove themselves. They respect that and they appreciate that.”

Encouraging independence is one of the primary benefits of employing someone with autism.

“Folks with autism, whenever they get that first job, it gives them that sense of pride, that sense of self esteem,” Laxton said. “It increases with knowing you’re doing a good job and getting a paycheck. That’s going to enable you to do more things and become more independent.” 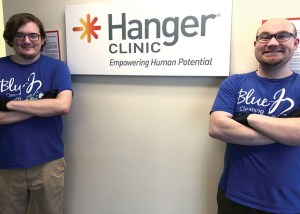 Austin and Adam, who served in a supervisor role for Blue-J, stand at Hanger Clinic, one the company’s clients. Photo submitted.

For many of Schultz’s employees who have autism, working for Blue-J was their first crack at employment. Typically, it’s not their last. Schultz said Blue-J has opened the door for many people with development differences to gain employment elsewhere, including at country clubs, FedEx and UPS. One former employee has even launched his own remodeling business.

“They have gained experience and are venturing out,” Schultz said. “I create a very safe environment where you can fail. I have to leave room for that because you learn from that. They go on and do things that are more in their interest. That’s what I build on.”

While Schultz said she is proud that Blue-J has accomplished its mission of helping people with autism enter the workforce, she’s also thankful for what the company has done for her.

“Blue-J has been like sandpaper,” Schultz said. “It’s helped me rub off the rough edges around myself and make me a better person. It’s done more to grow me than it has any of them.”