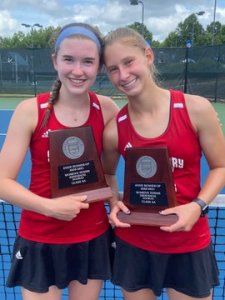 CARY — Salisbury seniors Lillie Rusher and Meredith Burton wanted to go out with a bang — and they accomplished that.

They won three matches in the 2A State Championships  at Cary Tennis Park for coach Milton Griffith.

Their final match for the Hornets was played for a 2A doubles state title. They lost in Saturday afternoon’s championship match 6-2, 6-1 to Hendersonville’s sister act of McCollough Perry/Eliza Perry.

The Perrys had eliminated the Salisbury doubles team of Millie Wymbs/Abby Campion in the quarterfinals.

Rusher and Burton had a tough fight with Hendersonville’s second doubles team in Friday’s quarterfinals.

Hendersonville was declared the team state champion based on a points system. The Hornets provided the closest competition.

In the 1A Championships, Gray Stone’s Emma Grace Bost was singles runner-up.