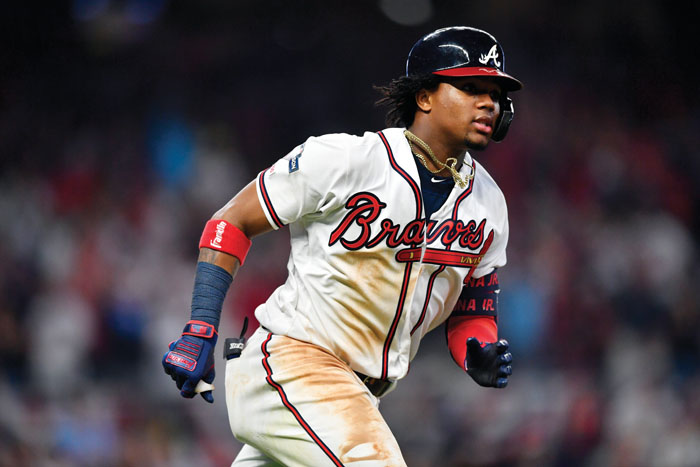 After Ronald Acuna Jr. was hit by a pitch, the Miami pitcher, manager and pitching coach were all ejected Friday night. (AP File Photo/John Amis)

CINCINNATI (AP) — Guillermo Heredia homered, doubled and made a defensive gem before crashing into the wall in the eighth inning in his return to Atlanta’s lineup, helping the Braves beat the Cincinnati Reds 3-2 on Friday night.

Heredia returned to the lineup after being available off the bench the last two games due to right wrist inflammation.

“You never want to miss time,” Heredia said, via translator Franco Garcia. “Thankfully I was able to recover and help the team out.”

Acuña returned to the lineup after missing two games with lower back tightness.

Dansby Swanson hit a solo homer in the sixth and Heredia added a solo shot in the seventh, both off Reds rookie Vladimir Gutiérrez (3-2).

“He was gassed up, I guess,” Braves manager Brian Snitker said of Heredia. “He was fresh. That was a really good ballgame for him.”

Gutiérrez got some defensive help in the fourth. With runners on second and third and two outs, Eugenio Suárez made a diving stop of William Contreras’ bouncer down the line and threw to first from his knees to end the inning.

Drew Smyly (1-1) exited after six innings with a 3-1 lead, and the bullpen held on. Smyly has won his last three decisions.

“The breaking ball’s been good, the fastball, too,” Snitker said. “Hopefully, he stays on this roll for another three months. He’s been really, really good.”

Will Smith worked the ninth and picked up his 16th save.

Heredia robbed Jesse Winker of an extra-base hit leading off the eighth and collided with the wall.

He stayed down on the warning track but remained in the game after being attended to by training staff.

“It was just a reaction,” Heredia said. “I just took off running and was able to track it down. My stomach hit (the wall) and knocked the air out of me. I felt like a boxer.”

Snitker jogged from the dugout to deep center field to check on Heredia. Once he knew Heredia was fine, the Braves’ skipper joked he might need some help getting back to the dugout.

“I told him I needed a couple of minutes to before I made the trek back,” Snitker said. “Told them I might need an Uber.”

The Braves starters have been on a roll of late, with Smyly delivering another strong outing on Friday. Saturday’s starter, Ian Anderson, tossed 5 1/3 shutout innings in his last start. Charlie Morton hasn’t allowed a run in 14 2/3 innings over his last two starts. “Everyone expects the next guy to dominate,” Smyly said. “It’s a matter of all of us clicking at the same time.”

Snitker has not named a starter for Sunday’s series finale in Cincinnati, but he did confirm that Charlie Morton will start Tuesday against the Mets, and Max Fried who’s currently on the injured list with a blister, is expected to take the mound on Wednesday. Morton will be pitching on an extra two day’s rest.

TRAINERS ROOM
Reds: After being scratched from his minor-league rehab start on Thursday due to a stiff back, right-hander Sonny Gray is confident he can make his scheduled start on Saturday, keeping him on track to rejoin the Reds rotation next week. Outfielder Nick Senzel (left knee) and infielder Mike Moustakas (right heel) aren’t expected back until after the All-Star break.