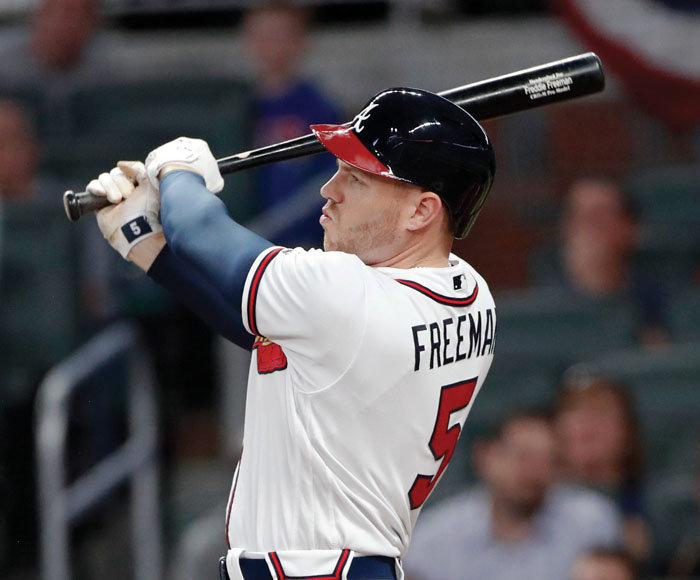 CINCINNATI (AP) — Tony Santillan allowed one run in six innings to earn his first major league victory and Nick Castellanos hit a two-run homer, lifting the Cincinnati Reds to a 5-3 victory over the Atlanta Braves on Thursday night. ,

Santillan (1-1) gave up three hits, struck out eight and walked three in his third big league start. He also doubled in the third inning for his first career hit.

“Tony was very happy not only to get a win but he pitched very well,” Reds manager David Bell said. “He got his first hit. It was a big night for him.”

Major League Baseball’s crackdown on the use of sticky substances continued Thursday, with umpires making random checks of pitchers. Braves manager Brian Snitker deflected any notion of suspicion with left-hander Tyler Matzek, who threw 21 pitches and walked three in two-thirds of an inning in relief of starter Jesse Chavez (0-1).

“He just couldn’t get ahold of the ball,” Snitker said. “I don’t know why.”

The Braves, who score nearly half their runs via home runs, went ahead 1-0 on Freddie Freeman’s 17th homer in the first. But that was the only run Atlanta could manage against Santillan.

“This, for me at least, it’s the top of the top to get a win by my name,” Santillan said. “I don’t show a lot of emotion on the field. It was good vibes all the way around after I hit the double.”

Brad Brach, the Reds’ fourth pitcher of the night, got three outs for his first save of the season.

It was a bullpen day for the Braves, who summoned the 37-year-old Chavez (0-1) from Triple-A Gwinnett to make his 482nd major league appearance and first start since 2019. He allowed two runs in 2 1/3 innings to take the loss.

The Braves used six pitchers on the night.

“It wasn’t easy piecing things together,” Snitker said. “We did a good job navigating the whole thing and kept ourselves in the game.”

The Reds were clinging to a 2-1 lead when Castellanos delivered the big blow, his two-run blast off Luke Jackson in the seventh. Castellanos drove in four runs.

“Those are the spots I have to better in,” Castellanos said. “I needed to be better with runners on base.”

Ozzie Albies hit a solo home run off Tejay Antone in the eighth.

The Reds’ struggling bullpen took another hit on Thursday when right-hander Lucas Sims was placed on the 10-day injured list with a sprained right elbow. Sims is 4-1 with a 5.02 ERA and 44 strikeouts in 28 2/3 innings. He is expected to miss up to four weeks.

“There was one night in San Diego (last week) where he felt like he slept on his elbow wrong, then he bounced back,” Bell said.

To make room on the roster for Chavez, the Braves optioned right-handers Kyle Wright and Ty Tice to Triple-A Gwinnett and transferred left-hander Tucker Davidson and catcher Alex Jackson to the 60-day injured list. Right-hander Tanner Roark also was selected from Triple-A.

Braves: OF Ronald Acuna Jr. was out of the lineup for the second straight day with a stiff back. “He’s still sore,” Snitker said. “They worked on him today. Hopefully he’ll be back in there tomorrow. It’s a day-to-day thing.” Acuna was scratched from his start Wednesday.

Reds: RHP Sonny Gray was scratched from his rehab start Thursday at Triple-A Louisville after he woke up with a sore back Wednesday morning. Gray, on the 10-day injured list since June 9 with a right groin injury, had his start pushed back to today.

Right-hander Vladimir Gutierrez (3-1, 3.86 ERA) makes his sixth major-league appearance after becoming the 19th pitcher in Reds franchise history with at least three wins in his first four starts since Tom Shearn in 2007. The Braves will counter with left-hander Drew Smyly (0-1, 4.70 ERA) who’ll be making his 13th start.