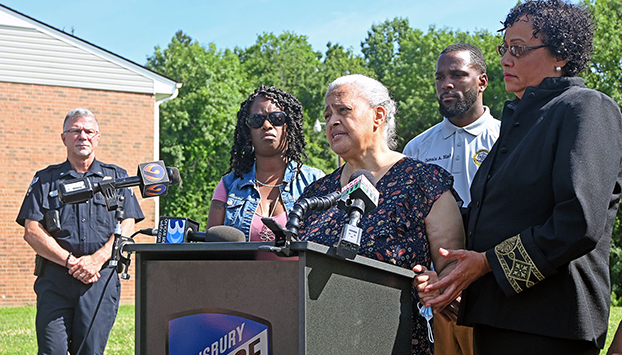 SALISBURY — When Debra Dalton hears noises in the living room, she still thinks they’re from her son, Joey, who she lost to a shooting at Zion Hills Apartments on June 6.

“I hate for daylight to come. And I hate for night time to come because I just break down and cry, Dalton said. “It just hurts me to know that he is in the ground.”

Zion Hills is one of the three sites where a reported homicide occurred this month. On June 6, Joey Eric Partlow, 42, was shot and killed in the parking lot of Zion Hills Apartments. During Friday’s announcement, Dalton called for an end to “this senseless killing,” and recalled memories of watching her son on his knees praying each night.

“I miss him so much. He would come in from work everyday smiling. He always had a smile on his face,” Dalton said. “He’d come up to me and kiss me and his kids.”

First introduced in 2019 as a summer initiative, Cease Fire is a collaboration between the Salisbury Police Department and Salisbury-Rowan NAACP to curb gun violence in Salisbury. After the recent homicides, Cease Fire is changing to a year-round initiative and asking for volunteers to assist with de-escalation efforts.

The launch also came days after President Joe Biden announced efforts to combat rising violence across the nation. Chief Jerry Stokes on Friday said that one of the five areas suggested include investments in community-based intervention programs for potential perpetrators and victims of gun violence, which puts Salisbury ahead of the curve and is “exactly what the president called for.”

Stokes credited a 20-year low in overall crime seen in 2019 — when there were two homicides — to the success of the Cease Fire initiative. In 2020, Salisbury Police responded to seven homicides. Stokes agreed with Biden’s remarks that the traditional spike in crime seen in the summer season is on track to be “even more pronounced” this year.

“The community has seen much success with the Cease Fire initiative reducing our violent crime issues,” Stokes said. “Our continuing partnership with NAACP has been a boon to both the Salisbury Police Department’s community engagement efforts and ability to effectively reduce crime in neighborhoods. We are pleased that we are able to continue on this journey of working together to reduce crime and build lasting relationships.”

In addition to de-escalation efforts, two Salisbury Police crime analysts housed in the new Rowan Regional Information Center will now be tasked with providing up-to-date data on violent crime hot spots across the city. De-escalators will be on-call day and night.

“With the president now offering a greater federal resource to local law enforcement, we expect to be another case study for a city our size in how to achieve solid, workable partnerships with community-based, grassroots organizations, and use those partnerships to reduce interpersonal violence, Stokes said.”

Salisbury-Rowan NAACP President Gemale Black said the community “must be proactive and bring a solution to the problem.”

“While working to prevent crime in our city, we encourage everyone — again, we encourage everyone — to join us in this effort to help decrease the gun violence crimes in our city,” Black said. “The Salisbury-Rowan NAACP will fight for equality, but we will still hold law enforcement accountable. In addition, we as residents, we as a community, must also hold ourselves in our community (accountable) in each and every neighborhood.”

Chariel Dye, a local activist and vice chair of Rowan County Democratic Party, briefly spoke about her program Queens in Training, which aims to empower and provide positive interactions and lessons to girls and women of all ages. Soon, a Kings in Training program will launch to “get young men involved and off these streets as well.”

For any families interested in the program, Dye suggested they reach her at 704-738-7077 or visit the “Queens In Training!” Facebook page.

Days after Partlow’s death, Bobby Eugene Simpson, 62, was killed in a home he was squatting in on Grace Street. On June 13, 68-year-old Sinatra Juan Jackson was shot and pronounced dead on South Jackson Street. Two others were shot in the South Jackson Street shooting and released from Rowan Medical Center.

Following Friday’s remarks, attendees joined the NAACP, police officers and members of the Salisbury Police Citizen Advisory Board to canvass nearby neighborhoods with flyers about the Cease Fire initiative. Included is an invitation to sign up as a volunteer de-escalator, which requires a training session and involves canvassing events and assisting officers on certain calls. Applicants must be 21 to volunteer and can submit applications at salisburync.gov/CeaseFire.

The flyers highlighted ways for the community to help mitigate gun violence, which includes reporting any suspicious activity and anonymously turning in illegal firearms by calling Salisbury-Rowan Crime Stoppers at 866-639-5245.

“When we mobilize together, we will ensure that gun violence in our community and our city will be an all-time low,” Black said.