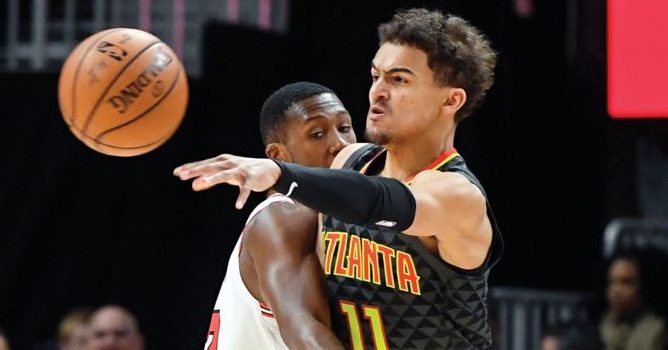 Atlanta's Trae Young led the way in the rout of the Hornets on Wednesday night. (AP File Photo/John Amis)

The Hawks improved to 6-2 in road playoff games this year and handed the Bucks their first home loss of the postseason.

Game 2 is Friday night in Milwaukee.

Young was two points off his career high.

Khris Middleton missed a potential tying 3-pointer in the closing seconds. Although Middleton scored 15 points, he shot 6 of 23 and missed all nine of his 3-point attempts.

Antetokounmpo scored the first six points in a 9-0 run that turned a 98-96 deficit into a 105-98 advantage with 4:18 left. Holiday capped that spurt by sinking a 3-pointer after Antetokounmpo got the rebound on his own missed free throw.

But the Hawks scored the next five points, and the game went back and forth from there.
Middleton missed a pull-up jumper with about 43 seconds left with Milwaukee up 111-110. Young missed a driving layup attempt, but Capela grabbed his 19th rebound and scored to put the Hawks ahead for good.

Hawks: Cam Reddish was available to play for the first time in four months but didn’t play. Reddish hadn’t played since Feb. 21 due to a right Achilles injury. Hawks coach Nate McMillan had said before the game the Hawks would cautious with Reddish by keeping him behind Tony Snell and Solomon Hill in the rotation. “We haven’t had the opportunity for him to get in any five-on-five since he’s been off,” McMillan said. “He’s been playing the last week or so some two-on-two, three-on-three.” … Atlanta is the third team since 1984 to make the conference finals despite having a losing record at the All-Star break. The others were the 2012 Boston Celtics and the 1984 Phoenix Suns. The Hawks were 16-20 at the break.

Bucks: Bobby Portis came off the bench with 4 1/2minutes left in the first quarter. Portis hadn’t played a single minute in the last three games of the Nets series. … Milwaukee fell to 11-3 in playoff games at Fiserv Forum. … This is the fifth time the Bucks and Hawks have faced off in the playoffs and their first postseason matchup since the Hawks won 4-3 in a 2010 opening-round series. They’ve split the four previous matchups.