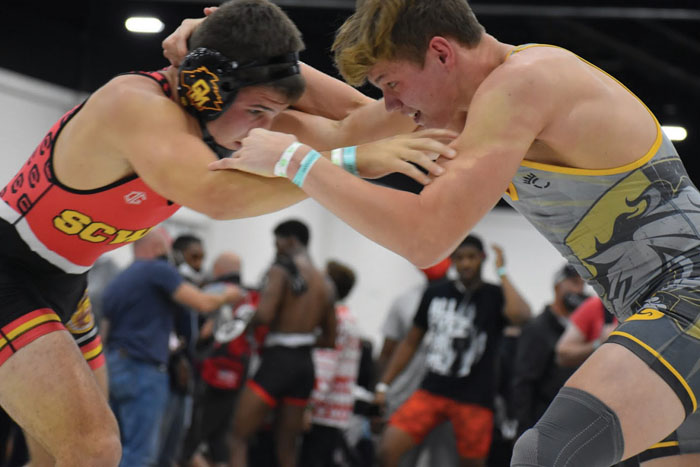 The best grapplers can deal with that stress, that sudden crazy overload of adrenaline. They can block out the fear and harness the passion and excitement.

They can keep their heads while competing in what amounts to hand-to-hand combat. Wrestling is borderline assault.

Recent East Rowan graduate Oren John “OJ” Bost is one of the best. A force for several years locally, he’s been ranked in the Southeast Region, and that takes in a lot of states and a lot of wrestlers.

Proficient enough at his craft that he’s headed to Appalachian State University to continue his athletic career and education, Bost has proven himself against national-level competition.

Back in October, he placed eighth in the Fall Grappler Classic, the most prestigious preseason event in the country. That event was moved from Michigan to Myrtle Beach, S.C., due to COVID concerns. Bost wrestled against hyped and celebrated counterparts from all over the country and beat most of them.

He gets his last shot at a NCHSAA state title on Saturday. He’ll be wrestling at 160 pounds. Some say that’s the toughest division of all.

“I wrestled 145 as a sophomore, 152 as a junior, and now 160,” Bost said. “There are really good wrestlers in every division. There’s tough competition everywhere.”

In normal times, Bost would have concluded his high school wrestling career in a three-day extravaganza at Greensboro Coliseum several months ago.

Obviously, these aren’t normal times, with a 2021 wrestling season that belatedly kicked off in April and has extended well past graduation day.

Bost will hit the mat shortly after 9 a.m. in Gibsonville, a small town on the Alamance/Guilford line and home of Eastern Guilford High School.  That’s where his quest for a 3A state title will be fulfilled or be denied. It’s a 16-man field, four mats and no slouches.

This is a one-day deal with no consolation rounds. Lose and you go home. No excuses. Win four, and you’re the state champ.

Bost is almost a life-long wrestler. He got started in wrestling about the same time he got started with school, learning the ropes with Rowan’s youth wrestling program.

“It’s always been wrestling for me,” Bost said. “What appealed to me about wrestling is that you could put in the work and then start seeing the results of that hard work. I was always willing to put the work in, no matter how it was going for me on the mat. Freshman year, I took some beatings, but I kept showing up every day.”

The Darkhorse Wrestling Club of Charlotte has been huge as far as molding Bost and instilling confidence. He credits Darkhorse coach Jim Avola as being the single biggest influence on his career.

Back in November, Darkhorse took a team to compete in a national event in Maryland. That team included Salisbury’s Tkaii Gaither and Michael Lowry, as well as Bost. Bost went 5-1 on a very big stage. He beat wrestlers from New England, Pennsylvania, Texas and Maryland.

The biggest jump for Bost came between his freshman and sophomore seasons at East. As a sophomore in 2019, he won 49 matches. He was the 3A Midwest Regional champion at 145 pounds.

In the state tournament, he lost to a senior in the first round. Then, after two victories, he took his second loss, an elimination loss, in the “blood round” that traditionally separates podium placers from non-placers.

“I learned from it,” Bost said. “The biggest thing my sophomore year was nerves. With experience, I’ve learned to handle it all a lot better.”

As a junior, Bost again won 40-plus matches, took a regional championship at 152 pounds and was better prepared mentally for the state tournament. He reached the semifinals before losing to an undefeated wrestler, the  eventual state champion. Bost bounced back to win the third-place match.

The work hasn’t stopped since then. COVID was an obstacle, but not a roadblock. There has been a lot of  lifting and a lot of sweat. Physically and mentally, Bost is stronger than ever, as he’s made a natural progression up to 160 pounds. Now he’s a regional champion for the third time.

Bost’s first opponent on Saturday will be North Henderson’s Ulises Vega De La Mora, who answers to “Uli.” Every wrestler has a story. Uli broke his ankle playing soccer and missed his entire sophomore wrestling season. Now as a junior, he’s a state qualifier, one of seven North Henderson state qualifiers.

Bost takes an impressive 22-1 record into Saturday’s competition, but Enka’s Tony Torres is 23-0. Fike’s Vincent Page and Chapel Hill’s Alexander Gunning have only lost one match. Eastern Guilford’s Laye Conneh is 23-1 and will be wrestling in his home gym.

It’s not going to be easy, but wrestling never is. Bost, who hopes to coach his own wrestling program some day, wouldn’t have it any other way.

Bost will be joined in Gibsonville by East teammates Tayron Frost, the regional champ at 182 pounds, Shayden Edwards (126) and Luke Heglar (113). West Rowan will be represented by Luke Harrison (132) and Carson by Drake Cadle (145). A.L. Brown has Gavin Hartsell (182) and Trevor Freeman (113) in the event. … South Rowan’s Jacob Cox (138), a defending state champion, and Salisbury’s Gaither (195), Lowry (145) and Javon White (120) will be wrestling in the 2A championships at Wheatmore High in Trinity.