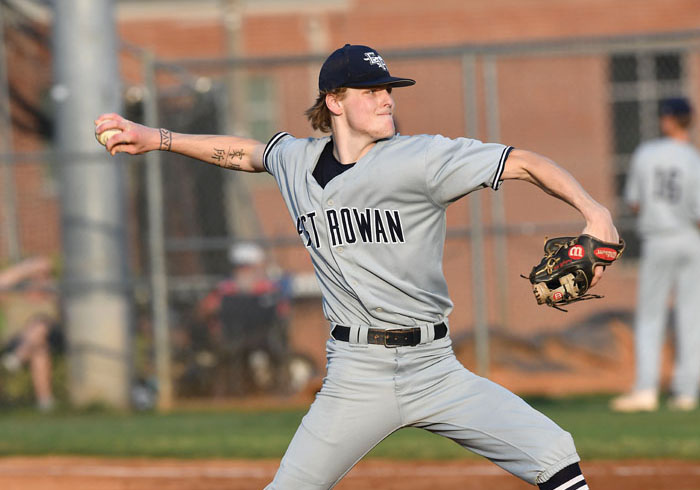 GRANITE QUARRY— Ten years from now Cameron Padgett’s stats for the 2021 will look like serious typos.

A 3-to-1 strikeouts to walks ratio is considered special. Padgett, an East Rowan right-hander, had a ridiculous ratio of 24-to-1.

A junior who is verbally committed to UNC, Padgett (5-0) allowed three earned runs in eight appearances.

“He was dominant all season,” East head coach Brett Hatley said. “He could throw three different pitches for strikes at any time and in any count. He’s a pitcher, not a thrower, but he could ramp it up on the fastball when he needed to.”

Padgett is the Patrick Snider Memorial Award Winner of this season, which was shortened, but still significant.

He also was the North Piedmont Conference Pitcher of the Year, as voted by that league’s coaches.

“He pounded the strike zone and let his defense work behind him,” Hatley said.  “He never had an off game.”

On May 25, Padgett struck out nine and hurled the 1-0 win at Carson that lifted East into a tie with the Cougars for the North Piedmont Conference championship.

He held Carson, which batted over .300 as a team, to three hits.

“That’s the game that stands out the most,” Hatley said. “He shut out Carson on 75 pitches. He threw 65 strikes.”

The 6-foot-4 Padgett is a rangy, versatile athlete who is still filling out his long frame. East’s football quarterback and a starter on the basketball team, he’ll be one of the leading candidates for Rowan County Athlete of the Year for the 2021-22 school year.

He batted .372 for the Mustangs this season, while providing solid defense at first or third base when he wasn’t on the mound.

“We started the season with Cam batting ninth, but he can do a lot of things with the bat and we moved him up to the No. 2 spot,” Hatley said. “He did a heck of a job for us in a lot of ways.”

This is the 10th “Snider Award,” which is given in remembrance of Patrick Snider, the North Rowan High and Rowan County American Legion pitcher who lost his courageous fight with cancer in the summer of 2010.  Previous East winners of the award were Bradley Robbins, Connor Johnson and John Owen, a two-time winner.