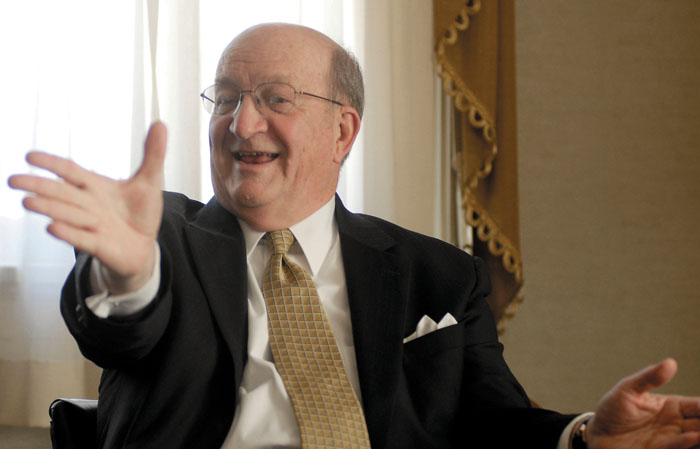 Larry Ford, retired judge of Rowan County, sits inside the judge's chamber inside the superior court of the Rowan County Courthouse in 2007. Photo by Stella H. Oh, Salisbury Post

SALISBURY — Larry Ford wore many hats during his life.

The former Rowan County Superior Court judge served on various local boards, was a member of a multitude of civic organizations and was a longtime elder at First Presbyterian Church.

But above all else, Larry Ford was a people person.

“He loved people and everybody loved him,” said Lawana Ford, his wife of 56 years.

Larry Ford, known by many as “The Judge,” died Saturday at the age of 86. A memorial service will be held on Friday at 1 p.m. at First Presbyterian Church, giving the people Larry Ford knew a chance to honor and remember his life and legacy.

Larry Ford was born in Kannapolis, but his family moved to Virginia for a few years when he was in elementary school. They returned to the China Grove area when Larry Ford was in fourth grade. That’s when he formed a friendship with Billy Ray Barnes.

“He was like my brother,” Barnes said. “That’s about the only way you could put it. We were very close.”

Their friendship, Barnes said, would go on to last a lifetime.

Together, Larry Ford and Barnes captained the Landis High football team, leading the squad to a successful season and a victory over bitter rival China Grove.

“When we beat China Grove, that was the state championship for us,” said Barnes, who went on to win an NFL Championship with the Philadelphia Eagles in 1960.

Larry Ford often talked about his high school football career later in life, and his friends grew used to hearing the tale of the infamous gridiron conquest over China Grove.

Larry Ford and Barnes didn’t let the fact that they went to separate colleges get in the way of their friendship. Oftentimes, Barnes would drive down from Wake Forest, where he was a dual-sport athlete, to Chapel Hill to stay with Ford in his fraternity house.

Larry Ford would go on to study law at Wake Forest, but it was after Barnes had moved on to play professionally in the NFL. There was, however, someone else special to Ford in Winston-Salem — Lawana Ford.

“He always said going to law school was the best thing he ever did because he met me,” Lawana Ford said.

When the two met, Lawana Ford was teaching school in the area. They married before Larry Ford’s last semester and moved to Rocky Mount after he graduated, where he worked as attorney for the Chip’s fast food franchise. They eventually moved to Raleigh when Larry Ford was hired by the N.C. Utilities Commission.

When given the opportunity by local lawyer Bob Davis to return to Rowan County and join a law practice in 1972, Larry Ford jumped at the chance. As a general practice lawyer, he earned the reputation among his peers as a hardworking and loyal attorney.

“He was always a good partner, worked hard, treated clients right,” said Ed Parrott, one of Larry Ford’s closest friends and a former law partner. “He always worked as hard or harder than anybody.”

Larry Ford did more than just litigate in the Rowan County Courthouse. He was deeply involved in all aspects of the community.

He joined the Kiwanis Club in 1974 and served as president from 1980-81. At the time of his death, he was the club’s second-most senior member. Larry Ford was also trustee for eight years at Rowan-Cabarrus Community College, a member of the Rowan ABC board, a member of the Andrew Jackson Masonic Lodge, an Oasis Shriner and a member of the Salisbury Chamber of Commerce.

“He did quite a lot in Salisbury,” Lawana Ford said. “He was involved in everything, he really was. He was always out doing something.”

Larry Ford’s civic resumé earned him the Long Leaf Pine Award in 1982, which Lawana Ford said was one of his proudest accomplishments.

Larry Ford was also active in state politics, serving as chairman of the Rowan County Democratic Party for a time and as the county chair of Jim Hunt’s campaign for governor.

“I don’t think he tried to be a political power broker at all,” Parrot said. “He liked politics because he liked people.”

Parrott first met Larry Ford when he was a recent graduate of UNC, looking for a law practice to join near his hometown of Lexington. Ford immediately took Parrott under his wing and welcomed him into his law firm.

“Larry was always very generous to me with his time and advice, which was helpful to a young lawyer,” Parrott said. “He really shared clients with me because I was from Lexington and he was from Rowan County. He wanted someone to help get work done and I was willing to do it, so a lot of his lifetime clients became my lifetime clients.”

Rick Eldridge, who met Larry Ford through the Kiwanis Club, also benefited from his guidance.

“He was always a real close friend and adviser,” Eldridge said. “I’ve always thought of him as a mentor. He used to tell people that he raised me from a pup. That was the expression he used.”

Larry Ford, described by many as a great storyteller, had plenty of famous expressions. The one most cherished by Lawana Ford and their adult children, Kim Haldopoulos and Grant Ford, was one he’d say when something wasn’t going his way.

“He’d say something funny like, ‘I’m having the best time I’ve ever had in my life. Aren’t you?’” Lawana Ford said.

Larry Ford’s ability to make light of difficult situations likely came in handy when he was serving as Rowan County Superior Court judge from 1998 to 2006. During his time as a judge, he became known for being able to strike a balance.

“I would say he was very down the line, non-political as a judge,” Parrott. “He was very fair. He had done a lot of criminal defense work through his legal career and he had represented plaintiffs in civil cases a lot and I think he was always very fair to both sides.”

Along with overseeing countless cases, Larry Ford help spur the creation of the jury assembly room at the Rowan County Courthouse, which still features a plaque bearing his name.

“He was the instrumental person that came up with the idea and proceeded to make contact with commissioners staff and recommended it,” said Ken Deal, a friend of Larry Ford’s who was an assistant county manager with Rowan County at the time. “It worked out really nice.”

After being forced to retire from duties as Superior Court judge at the age of 72, Larry Ford continued to serve as a mediator.

Larry Ford brought his ability to coax compromises to his leadership role with First Presbyterian Church, where he served as an elder for 16 years. During his time as elder, Larry Ford was responsible for bridging the gap on several issues debated by the church’s “session,” which is its leadership group.

Larry Ford did more than help make decisions at the church. He was a well-liked Sunday school teacher as well.

“My daughter was a part of his class and thought the world of Larry,” Lewis said. “Larry was a people person. I don’t know people who dislike Larry Ford. He had an amazing ability to connect to most everyone.”

Larry Ford was cared for in his final days by the staff at the Lutheran Home at Trinity Oaks. Near the end of his life, Haldopoulos said she and her brother told their father how thankful they were for the many opportunities he provided them.

In lieu of flowers for Larry Ford’s memorial service, donations may be made to First Presbyterian Church Building Fund or Rowan Helping Ministries.