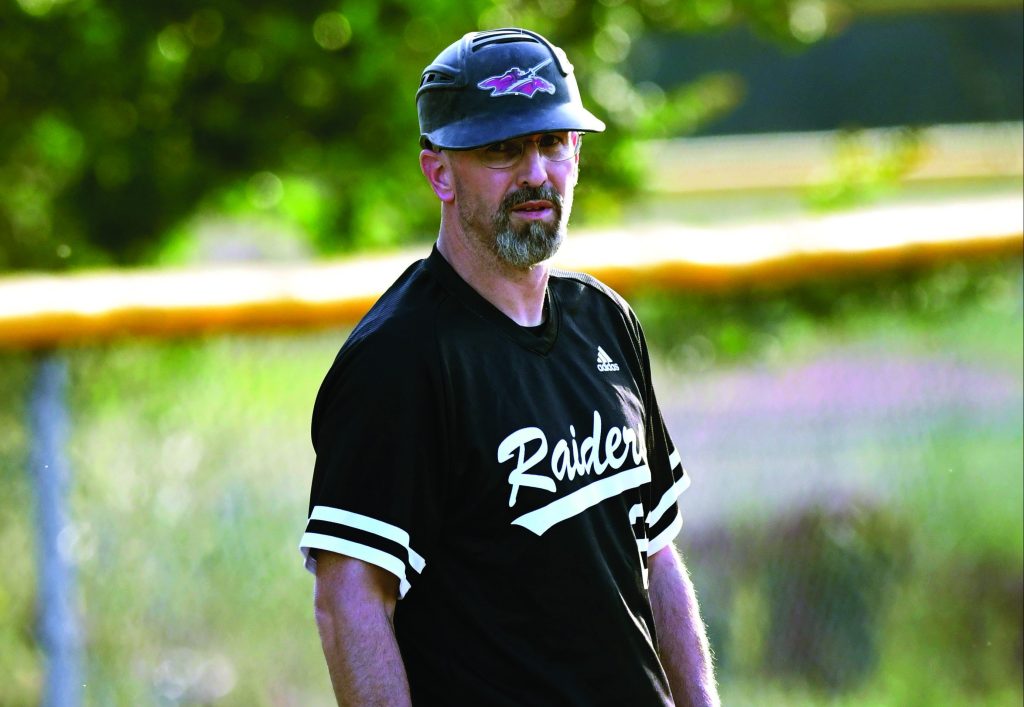 That was career victory No. 179 for Chrismon, a record-setting UNC reliever in his playing days.  He has guided the Raiders since 2009.

Now he’s at 182 victories. South beat North Davidson for a conference tournament title (the first for the school since 2003) and won two 2A road playoff games before dropping a one-run game to R-S Central in the third round.

“Our chemistry was very good, and this was one of the best practicing teams I’ve ever had,” Chrismon said.  “We were deep and on deep teams the players compete and push each other, but when it came time to play the games, they were each other’s biggest fans. On top of that, the administrative support and fan support were fantastic. It was an enjoyable season.”

Chrismon is the Post’s Rowan County Coach of the Year after leading the Raiders to a 14-4 record. South has been a consistent winner during his long tenure (182-126), but this is only the second time he’s been honored as the top coach in the county. The first was in 2012.

There was plenty of competition. Brett Hatley’s East Rowan team and Chris Cauble’s Carson team tied for the North Piedmont Conference title. West Rowan coach Seth Graham’s team missed out on the playoffs, but the Falcons could pitch. West was 4-3 against South, Carson and East and beat all three.

Salisbury’s Mike Herndon managed to win five games with a female second baseman and recruits from the golf team. North Rowan coach Zach Tatarka, a former Raider, was able to piece together a team and play the schedule. That was no small accomplishment.

Carson, East and West have enjoyed spectacular seasons during the past dozen years, while South usually has been in the shadows, grinding out good ones. That spectacular season for South could be coming in 2022, even with a move up to what figures to be a monster 3A baseball league that will include Carson, East and West. The Raiders graduate a solid class, but nine key players were juniors, and sophomore southpaw Haiden Leffew was the staff ace.

“The 2021 team will stand on its own for what it accomplished,” Chrismon said. “We’ll be a different team next year, and the makeup and chemistry are not going to be exactly the same, but we do fully expect to be good again. We weren’t satisfied with how it ended, but we should be able to build off this season.”

South’s Kane Kepley and Ty Hubbard hit over .400, but the Raiders were feisty more than anything. They drew a lot of walks. They were hit by pitches an astounding 37 times. Jacob Ritchie, Drew Watkins and Nathan Chrismon, the coach’s son, were unflinching magnets for thrown baseballs.

“We had good two-strike approaches, we fought at the plate, and we didn’t give at-bats away,” Coach Chrismon said. “I think all those walks and HBPs were just a testament to how much our kids bought in to what we preached and to how hard they competed. Any way on base is good, and we found ways to get on base. We scored our share of runs.”

While everyone respected South’s lineup at the beginning of the season, the pitching staff was the question mark. But once South got Leffew back from some arm tenderness and got senior Luke Hiskey healthy, the Raiders were formidable. Chandler Oddie emerged as an exciting mound option. In a five-week stretch, South went 11-1.

“We had some early adversity, but our pitchers grew up and got better as the season went on,” Coach Chrismon said. “And it helped that we usually played very good defense. Our pitchers could fill up the strike zone and have confidence that plays would be made behind them.”

“Dedicated guys who cared about the kids and did things the right way,” Chrismon said. “All the coaches worked with all the kids. I can’t say enough about those guys.”

It was a special season for the head coach in a lot of ways, especially after having 2020 taken away by COVID. It was a family affair, with his talented son playing shortstop and getting on base on more than half of his plate appearances and with his nephew, Jackson Deal, manning right field and helping out on the mound.

Their teammates were the guys they’ve grown up with, so Coach Chrismon knew this group of players long before they arrived at South.

“I’d like to get up on a mountaintop and shout about what really great kids we’ve got in the program,” the coach said. “We’ve got high-level students. We’ve got high-level people. Where we’re really fortunate is that these guys also happen to be good baseball players.”