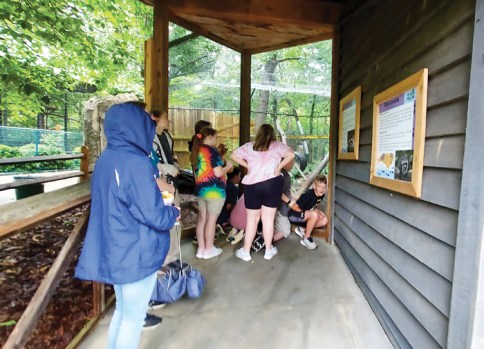 Carl Blankenship/Salisbury Post - Campers crowding around the racoon enclosure to watch the animals rummage through feed bags made for them. 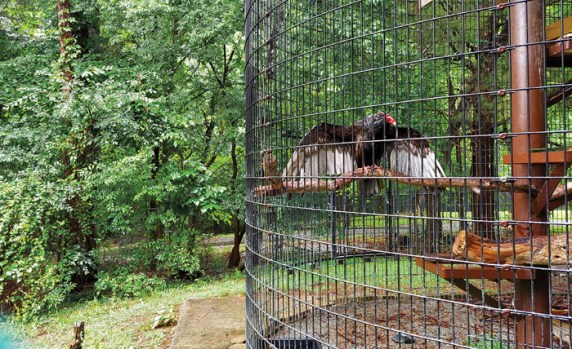 Carl Blankenship/Salisbury Post - A turkey vulture spreading its wings after some afternoon rain. The vulture shares a habitat with a red-tailed hawk. 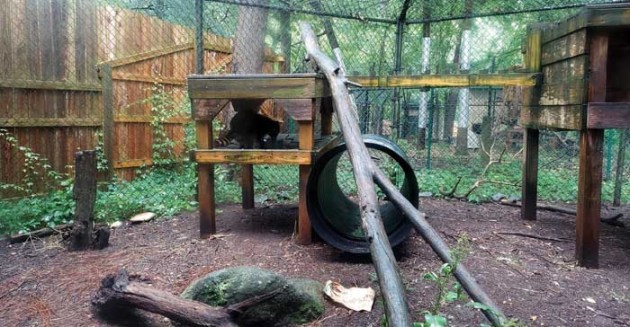 Carl Blankenship/Salisbury Post - One of the facility's four racoons sheltering from the rain and perusing the treats the campers brought to the enclosures. 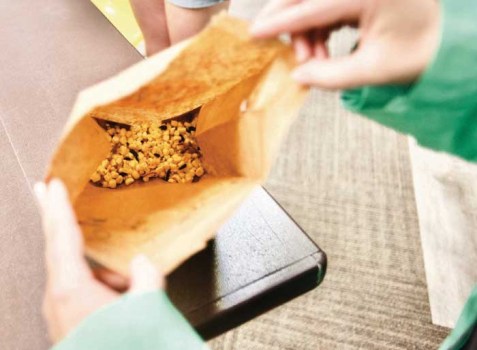 A look at some of the snacks for the chickens: corn with crickets, beetles and worms. 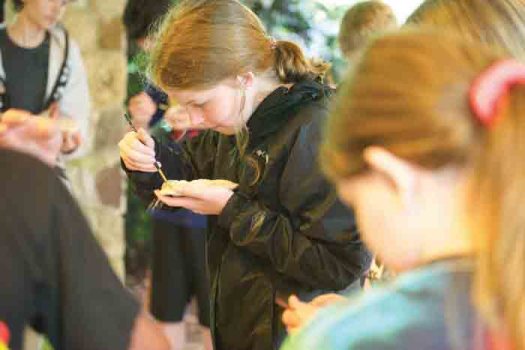 Carl Blankenship/Salisbury Post - The sand-molded prints had to be carefully brushed clean.

SALISBURY – Rowan Wild’s summer camps are back and showing kids what the natural world has to offer, with a few changes.

Last year, like many others, the camps were canceled because of COVID-19. With word of the camps returning, and with a decreased capacity, the Dan Nicholas Park nature facility’s offerings filled up well before the school year was over. Campers chose between an outdoor skills, an animal camp and a herpetology session later this summer.

The outdoor skills camp is aimed at kids who love to be outside, teaching them basics of being in the wilderness — including building a shelter and purifying water. The herpetology camp gives kids a crash course in reptiles and amphibians.

Animal camp is on the agenda for this week, taking kids through a weeklong expedition of North Carolina wildlife. Rowan Wild focuses on native species, and the animals it has on display in its exhibits can be found locally. Kids learn about everything from foxes to hellbenders.

Education Specialist Misty Parrish said this year’s camp is a combination of what would normally be a separate animal camp and its keeper camp, which gives kids a more detailed look at animal care.

Monday was an introduction to animals for the campers. On Tuesday, they were learning about mammals. They made print casts in sand and silicone molds, handled a couple of the animals and put together bags of snack for some of the park’s animals that included everything from grapes to live crickets. The campers will spend the rest of the week covering other types of animals such as birds, fish and reptiles.

A skunk and an African pygmy hedgehog were among the featured animals on Tuesday. The hedgehog is one of Rowan Wild’s pocket pets. While not a North Carolina native, she is popular with the kids. Parrish said the small, gentle critters are good for teaching kids about mammals and how to handle them.

On Wednesday, the campers will be on a macro-invertebrate hunt, looking for larvae and nymphs near the park’s lake. They will also get to go fishing for a chance at some up-close interaction with local fish.

If kids take away just one new piece of knowledge, Parrish said, that makes her happy.

Rising ninth grader Nate Phifer said he enrolled in the herpetology camp before. He enjoyed that camp and wanted to learn more about animals.

He wasn’t able to narrow down one particular animal he’s most excited about.

Phifer said he enjoys being around animals he would not normally get to see, pointing to chickens, one of the animals at Rowan Wild, as an animal that people may misunderstand due to lack of experience.

Tahlon Matthews, a rising eighth grader, is interested in snakes and was thrilled when he found an intact snake skin in his yard last summer.

He dispelled the idea that snakes are exceptionally dangerous and said they are important for controlling populations of small mammals such as mice and rats.