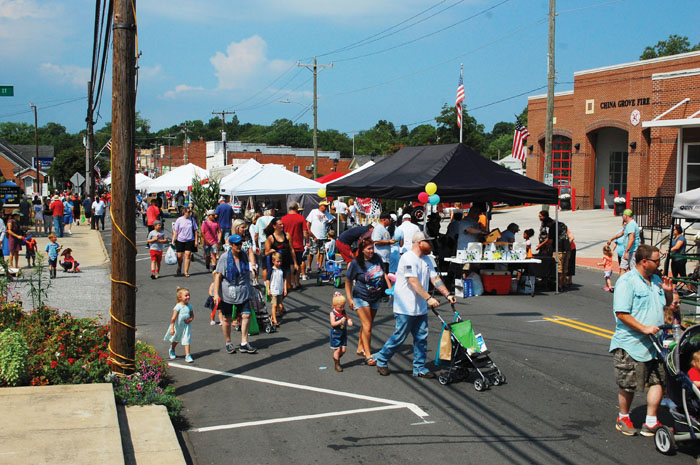 Thousands came out to China Grove Farmers Day on July 20, 2019, despite the heat index being in the 100s. Liz Moomey, Salisbury Post.

CHINA GROVE — To celebrate the 40th anniversary of Farmers Day, the town is expanding this year’s festival into a week-long extravaganza.

The annual summer celebration started in 1982 when a group of volunteers organized a street festival to honor local farmers. The organization of the festival was eventually transferred to the town of China Grove. With several thousand people flooding Main Street to check out the farmers and vendors who set up shop for the event, Farmers Day is the town’s most well-attended annual event.

“It draws people from other areas, but it’s largely a community festival,” said Patti Price Love, China Grove’s event planner. “It’s really remarkable to me to see everybody come out. It’s like a big family reunion. Especially this year, I’m expecting a lot of people because we haven’t been able to see each other for over a year.”

Last year, the COVID-19 pandemic forced the town to host a mostly virtual event in lieu of the traditional celebration.

“We’re ready to go,” Town Manager Ken Deal said. “Everything is back to normal. We have about 131 vendors and we’re looking forward to having another successful year. This is our 40th one, so it will be a little special.”

Farmers Day itself will be held on a Saturday, July 17, as usual, but there will be a week full of events leading up to the big day this year.

The celebration will commence on July 10 with a concert performed by Darrell Harwood and Tracen Hollow Band at Hanna Park. The concert, which starts at 6:30 p.m., is being billed as Harwood’s last hometown show. Harwood’s performance will finish around 9:30 p.m. and be followed by a firework show that is typically held after Farmers Day. The fireworks after Harwood’s show will be the only fireworks during the weeklong celebration.

The festivities will take a two-day hiatus before continuing on Tuesday night, with Music & Art in the Park from 7-9:30 p.m. Local artisans will set up booths around Hanna Park, allowing patrons to peruse local jewelry, paintings and other creations while listening to live music. On Wednesday night at 9:15, there will be a showing of the film “Fall Nights in China Grove” at Hanna Park. The film was shot largely in Rowan County and is set in its namesake town.

On Thursday night at 6 p.m., there will be a picnic at Hanna Park, followed by a parade of tractors and other farm equipment. Price said citizens are encouraged to decorate their golf carts and participate in the parade as well. After the parade, there will be an old-fashioned cake walk. Those interested in baking and donating a cake can contact Price via email at pprice@chinagrovenc.gov.

The festivities will move to the China Grove Roller Mill on Friday evening. Gaining Grounds bluegrass band will put on a performance during the weekly farmers market from 4-6 p.m.

The grand finale will be Farmers Day, which will last from 9 a.m.-4 p.m. on July 17. The festival is set to feature many of the same events locals have come to expect, including the Little Mr. and Miss Farmer Pageant and the zucchini car race. There are about 130 vendors of all types signed up for the event, which will also have live musical performances and activities for children. Price has already booked a magician and a clown.

“My favorite thing is to see the little kids’ smiling faces all day long,” Price said. “They’re so excited and they’re so happy.”

To recognize the event’s 40th anniversary, the town will sell commemorative tumblers, shirts, towels and signs. The event’s original organizers will be honored during a ceremony on Farmers Day.

Parking will be available at China Grove Middle and China Grove Elementary schools. Two air-conditioned trolleys will transport participants back and forth.

Although Farmers Day has evolved over the years, it’s long-been jokingly referred to by some China Grove residents as the hottest day of the year.

“The one thing that hasn’t changed; it was hot then and it’s hot now,” Deal said.

The town is asking that people leave their pets at home, both because of an ordinance prohibiting pets at town events and because the heat may prove to be dangerous for animals.

In order to help people beat the heat, Price said the town puts a large tent over most of the vendors in Hanna Park and sets up two cooling units that bring the temperature down significantly. Misting stations and free water bottles will be available.

“There’s plenty of places to get cool,” Price said.