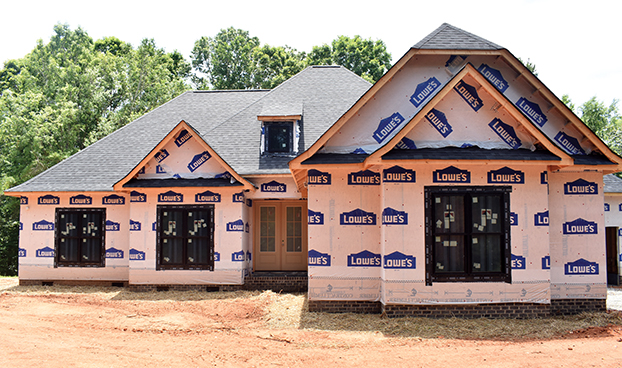 SALISBURY — As the pandemic spread across the country last year, the local homebuilding market was quiet.

“As far as the building side went, we stopped building and the phones stopped ringing,” said Jonathan Coarsey Wallace, a local real estate agent who works closely with homebuilders in Rowan County.

Then, with mortgage rates suddenly lower than they’d been in decades, the floodgates opened.

“All this demand came on board and it was really hard to keep up,” Coarsey Wallace said. “Once the pandemic was in full swing, people wanted to buy houses.”

People didn’t just want to buy houses, they wanted to build them.

“Every builder has been swamped throughout all of this,” said Tony Finney, of Mooresville-based Finney Builders.

The residential building boom has continued into 2021. The rush to build, combined with supply and labor shortages, has led to increased prices and some challenges for homebuilders. Even though the custom home market appears to be cooling off slightly, local builders worked through and around obstacles such as higher lumber costs and delayed delivery dates to construct new homes.

The recent upswing in homebuilding feels familiar to Adrian Pruett, the environmental health manager for Rowan County. One of Pruett’s responsibilities is overseeing the county’s soil site inspection program, which for many builders is one of the first steps in constructing a new house that requires a septic system.

Pruett has been inspecting sites since the mid-2000s, which is the last time he remembers homes being built at the current clip.

“From what I’m seeing, we’re in a boom,” Pruett said. “Talking with everybody, and I still have friends in the private sector because that’s what I used to do, they can’t keep up. They’re four weeks behind trying to keep up. It reminds me of 2006.”

There is typically an increase in new construction in the spring, Pruett said. That means the county’s soil site evaluation staff works at a hectic pace in March and April. But this year’s uptick began before the weather was even warm.

“You were seeing 66 (soil site evaluation) applications in January, so it started very early this year,” Pruett said.

The demand for home construction in Rowan County has persisted despite the steeper price of homes, which is largely a result of the high cost of lumber.

“We saw lumber go up about 200-300%,” Coarsey Wallace said. “A home that I was building last year in a development outside of Salisbury, we’re now selling those homes for $100,000 more and our profit margins have not changed. We’re still making about the same profit margin, but actually a little less because we’re still trying to get people houses.”

The cost per thousand feet of board reached over a record high at over $1,500 in May, which has pushed some people out of the market.

“There are some people who simply cannot afford to build right now because of the lumber costs,” said Lori Burke, managing director for Salisbury-based Porter & Cress Builders.

As a result of the raised prices, Burke and her team have had to get creative when planning houses for clients. Burke said the company has found ways to cut lumber costs by downsizing homes or using prefabricated roof trusses instead of framing a roof using rafters. Using trusses for the roof structure leaves less attic space for the homeowner, she said, but can shave between $8,000-$15,000 off of the home’s overall price. And with costs being what they are, small compromises are more common. 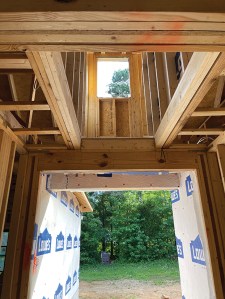 The cost of lumber appears to be on the decline, but is still well over its pre-pandemic price. Photo submitted.

“You name any one thing in a house and there’s nothing that has gone down in price,” Finney said.

Everything from appliances to fixtures and finishings have increased. In addition to higher prices, some local home builders have seen wait times for materials lengthen during the pandemic. Waiting for windows, door moldings or other house components delays the entire process.

“If I have no delays in products, if I have full labor and the weather cooperates with us, I can build those homes in four months flat from the time I put the foundation in,” Coarsey Wallace said. “If we take three months to do a contract, permitting and that stuff, you’re looking at six to seven months from the time you sign a contract to the time you move in. Those same homes now, I’m telling people to get prepared for 10 (months).”

Some prospective homebuyers have decided to wait altogether to build their dream dwelling.

“I think some people are waiting to see what lumber is going to do,” Burke said. “I’ve got several customers on a list now.”

With demand for new homes somewhat receding, in addition to other market factors, lumber prices are starting to come back down. The Wall Street Journal reported last week that futures (agreements to buy or sell a commodity at a set price) on lumber for July are down 41% from early May. Although the cost of lumber could continue to drop, homebuilders aren’t counting on anything.

Burke said she gets asked almost daily about the future price of lumber. Her answer is always the same.

Finney said he expects lumber prices to continue to decrease, but doesn’t think there will be an immediate impact.

“My suppliers are telling me that lumber, and you can see it on the futures report, that prices will be down in the fall, but we’re looking at October before we start seeing any of those boosts statistically,” Finney said.

With uncertainty remaining in the homebuilding market, Coarsey Wallace said people considering building a home shouldn’t stay on the sidelines, scared away by reports of higher costs.

“You’re always going to look back and say, ‘Man I should’ve done this in 2020,’” Coarsey Wallace said. “Now it’s 2021. If this is the home you want and you have the money for it, you should start the planning now.”