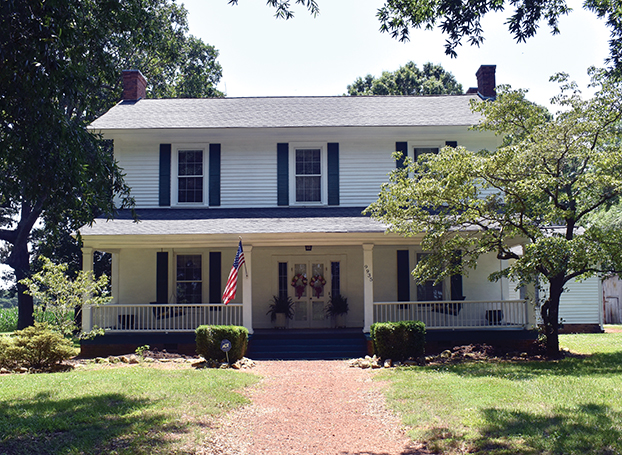 The Newberry Hall House has been desingated as a Rowan County Historic Landmark. Ben Stansell/Salisbury Post

The Rowan County Board of Commissioners on Monday designated the Newberry Hall House and an adjoining acre of land at 9935 N.C. 801 as the county’s eighth historic landmark. The historic landmark designation is bestowed to properties in the county that have historic importance and have maintained the same appearance they had when they were constructed.

The farmhouse was constructed around 1865 by Newberry Hall and James G. Graham, who built homes for at least two other prominent residents of western Rowan County. The historic home is cited as one of the few examples of a 19th century Greek revival farmhouse in the county and was recognized for its architectural importance by the National Register of Historic Places in 1982. The home has undergone changes over the years, but maintained its original character.

“This is a beautiful homesite that has been preserved over the years,” Vice Chair Jim Greene said. “It’s just a wonderful thing they have done to preserve this home, not only for western Rowan County, but for all the county to see the architecture that was done in these times.”

The house was the seat of the Hall family’s farm operations, which included one of Rowan County’s first dairies. Although the house is still surrounded by over 100 acres of farmland, the dairy is no longer a part of the family’s agricultural operations.

The Historic Landmark Commission in April approved an application submitted by Turner Correll Hall to establish the house as one of the county’s landmarks. The historic designation was also recommended by North Carolina’s State Historic Preservation Office. The total value of the home and one-acre parcel is $282,157. As determined by the state, Rowan County Historic Landmarks receive a 50% tax credit that is intended to help the homeowner further preserve the property. In addition to the tax credit, being listed as a historic landmark can bring additional attention to a structure. Since the Neely School near China Grove was designated as a historic landmark in 2017, the property has received new visitors and now features an education trail.

• In a report to commissioners, Finance Director Jim Howden outlined the county’s most recent financial numbers.

Expenditures through May were about $132.69 million for the fiscal year, which is roughly $2 million less than the year prior. The county’s annual cumulative revenue through May was about $146 million, which was about $12 million more than the previous year. The increase in revenue is largely due to COVID-19 funding from the federal government.

The county’s cumulative sales tax through February was roughly $2 million more than the year prior, but the county’s sales tax revenue of $2.18 million in just the month of February was actually lower than February 2020 — the first time that’s happened this fiscal year, which started in July and ends next week. February might be an outlier, Howden said.

• The personnel board, which includes Greene, Chairman Greg Edds and County Manager Aaron Church as a non-voting member, voted to reclassify the position of purchasing agent as director of purchasing and contract administration.

The position is currently vacant. The previous purchasing agent was David Sifford. The county is advertising for the position, which has a salary range of $71,532 to $114,451 annually.

• Commissioners approved the acceptance of $13.8 million from the U.S. Department of the Treasury for the county’s first half of American Rescue Plan funding. About $7 million of that funding has already been allocated in the county’s upcoming 2021-22 budget. The county is expecting to receive a second payment of almost $14 million next year.

The 2% increase is based on the increase approved by the Salisbury City Council earlier this month. While the county owns the water line, the water is provided by Rowan-Salisbury Utilities. With the 2% increase, the new rate will be $72.51 a month, which will provide each customer up to 5,000 gallons of potable water. Every additional gallon of water over 5,000 gallons be $6.72 per 1,000 gallons.

The fee increase will go into effect on July 1. Commissioners also authorized Church to conduct a community meeting with customers of the Northeast Water System on Aug. 12 at 5:30 p.m. to discuss the system and the increase in water fees.

The county has worked to eliminate the presence of lead in the drinking water of customers on the system. Commissioners during the meeting authorized Church to advertise for a contractor to replace the in-home piping of several homes using the system. Church estimated that about 15 residents may be eligible for pipe replacements based on the results of recent testing.

• Commissioners approved a request from the Rowan County Chamber of Commerce for a permit to exceed the county’s amplified sound standards for its seventh annual Dragon Boat Festival on July 24 at the Shrine Club at 6480 Long Ferry Road. Typically an annual event, the festival was canceled last year due to the COVID-19 pandemic. Chamber President Elaine Spalding said the festival is the “best team building exercise you can do in this community.”

• The board approved numerous text amendments to the county’s statues, including minor tweaks to the language found in the county’s rules on zoning, flood damage prevention and historic landmarks. The changes are in accordance with changes to the planning and zoning statutes made at the state level.

• Commissioners lifted the moratorium placed on rental events at the event center in the West End Plaza. The moratorium was originally implemented by commissioners in March to allow the Health Department to use the space for COVID-19 vaccinations.

• The board approved a $4,500 contract agreement between the county and S.E. Collins engineering firm for the replacement of the Kerr Mill water wheel at Sloan Park. The county has sought to replace the historic and rapidly deteriorating water wheel for years.

Between local champions and an upcoming state tournament, pickleball…