Mike Wilson column: All about my father 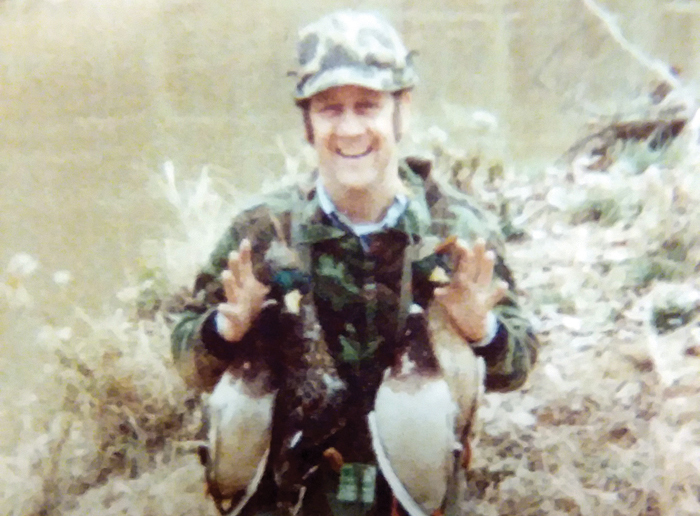 My good father died of mesothelioma in 1992 at the age of 57 — much too young — on the same day as the richest diamond merchant in Memphis. A few days later, they were both buried at opposite ends of the same cemetery at roughly the same time. Why was it “standing room only” — they had to hurriedly rig up some outside seating and speakers — for the funeral service at the modest Baptist church Dad attended, and why did it seem that there were three times as many cars arriving at his graveside service thereafter as at the prominent jeweler’s? Let me tell you…

Billy Joe Wilson — not a nickname for “William Joseph,” thank you — was born in 1935 in the heart of the Depression, the youngest of four children.  Early on his parents divorced, and from his youngest boyhood he worked to help support his mother’s struggling household by delivering papers, sometimes throwing two routes in the morning and two in the afternoon. A gifted natural athlete, his outlet for sports would be restricted to the YMCA because of the excessive time required for school participation. His basketball skills attracted the attention of coaches even there, and he was offered a chance to play in college with a scholarship to a local private college in Jackson, Tennessee. Here’s where I came along as something of a surprise and altered his life trajectory.

He married at 19 and worked briefly as a surveyor with the highway department before joining the phone company as a lineman. The next few years led to two more kids by age 25 and an unfortunate (or fortunate, depending how you look at it) divorce. He was awarded custody, and he then had to try to work his way back toward Tennessee since he had been transferred to south Florida. We lived with my maternal grandparents while he worked in Mississippi for over a year. His tales of living and cooking in a motel room with three other linemen to save up expense money — typical dinner fare was fried liver and onions and “Yankee” beans — confirmed that his thrifty nature had set in early on. It is hard to imagine the “atmosphere” in that room…

There it seems that Faye, a young operator with whom he interacted to test new lines, caught his eye, and he became engaged and got married in 1963.  He took up regular church attendance — and with something of a vengeance — at her request, and we were suddenly a family of five with a new home in Memphis to split the distance between their extended families in Jackson and Grenada.

He was a kind, fair and generous — but no-nonsense — manager to his workers at Southern Bell. If someone was late twice — even a minute — he or she went home docked a day’s pay per policy. He was also a wonderful Scoutmaster to my troop, and I have the fondest memories of that period and our activities together. He mentored many young men who needed it a lot, continuing well past my aging out and leaving for college. Thanks to his time as a platoon sergeant in the National Guard, our troop was well-versed in close-order drill and always marched smartly into jamborees.

He was incredibly slow to anger. I think I only saw him “mad as hell” once in my life when the son of church friends wrote him a bad check for a car.  That type of dishonesty he was basically incapable of contemplating.

His loyalty to Bell in its many shifting appellations was truly impressive. After starting as a lineman, he gradually rose to management positions, including quality control auditing that took him across the breadth of the state. Apparently a promotion in that area was in store, but he turned it down to spend more time at home with the family. When New York Bell workers went on strike in the early ’70s, he reluctantly answered the call for management personnel to fill in in New York City. For a year, he came home one long weekend per month. The things he saw there, the essential godlessness so foreign to his vital experience, left a profound impression on him that he tearfully recounted one Wednesday night in church after his reprieve. I know he deeply regretted missing that year in our lives.

He was a man of deep and simple faith. He became the perennial chairman of deacons at Cherry Road Baptist Church, and if the Good Book said deacons were supposed to (among other things) help widows, he took that to heart and set up a formal program to assist them with home and car repairs that still exists today. His favorite hymn was “Jesus Loves Me,” and his favorite Bible passage Psalm 23. Like I said, simple.

He had barely retired from his 37 years with Bell when persistent back pains led him to his doctor, and tests revealed advanced mesothelioma already badly spread. Those years splicing cables in manholes or inspecting the work of others had exposed him to a lot of asbestos. Chemotherapy did very little to help.

The church had a hospital bed it would lend out to members for home recuperation or hospice care. One of his last helpful acts was to get out his trusty cable splicing snips to repair the switch that raised and lowered the head — even as he lay in it — for the next occupant. As he labored to breathe in his last days in the hospital, I remember telling him that I wished I could somehow pay him back for my lifetime of love and care and support. In one of his last conscious sentences, he told me, “It’s not a pay-back world; you give love and you get love, and it all evens out in the end.”

His funeral was packed with kin, church friends, neighbors, former co-workers, Boy Scouts, and now-grown kids he had coached in church leagues, all there to honor an exemplar of Christian faith, industry, kindness, helpfulness and friendliness. The number of lives he touched cannot be counted. So that’s where all the cars came from.

‘Down by the Praise Pond’ shares local author’s faith…