Also referred to as “Juneteenth Independence Day,” “Freedom Day” or “Emancipation Day,” Juneteenth commemorates June 19, 1865, when Union Gen. Gordon Granger arrived in Galveston, Texas, to inform enslaved Black Americans of their freedom and the end of the Civil War more than two and a half years after President Abraham Lincoln formally signed the Emancipation Proclamation on Jan. 1, 1863. Texas was the first state, in 1980, to declare Juneteenth a holiday.

Hundreds of people visited the 200 block of East Fisher Street Saturday to chow down, shop, mingle among 40 vendors and dance to a variety of music. The event was hosted by the Salisbury-Rowan chapter of NAACP. 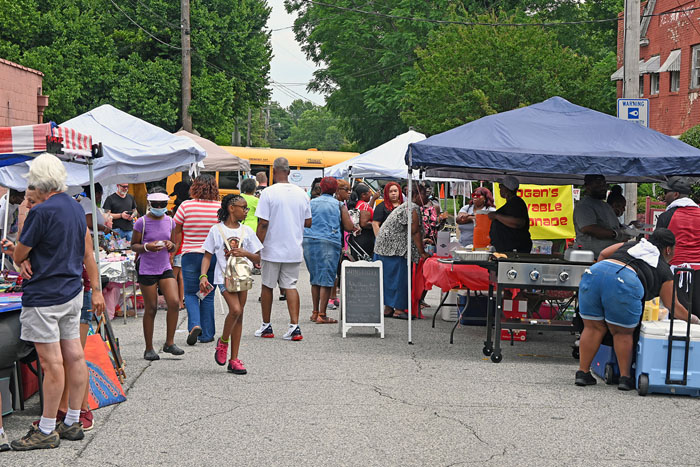 Natalie Anderson/Salisbury Post — The Salisbury community saw its largest turnout yet for an annual celebration of Juneteenth, a holiday commemorating the freeing of enslaved Black Americans after the signing of the Emancipation Proclamation. The event featured around 40 vendors and Black-owned businesses selling merch, apparel, art and food along the 200 block of East Fisher Street.

The Salisbury Dancing Kings & Queens also performed a three-song routine, including Nellie Travis’ “Mr. Sexy Man.” For those who have yet to receive a COVID-19 vaccination, Saturday’s event also provided an opportunity.

Mayor Karen Alexander formally read the city’s proclamation honoring the 156th anniversary of Juneteenth. Alexander said the city council is expected to pass a separate resolution acknowledging its recognition as a federal holiday.

“Whereas, Juneteenth has a special meaning to African-Americans and is the oldest known celebration commemorating the end of slavery in the United States,” the proclamation stated. “And whereas Juneteenth is a time to cultivate the true spirit of freedom and to remember our ancestors as the men and women who bravely acted as catalysts for change.”

Alexander said another reason to celebrate is Juneteenth’s new status as a federal recognized holiday, which sparked cheers and applause from the crowd. 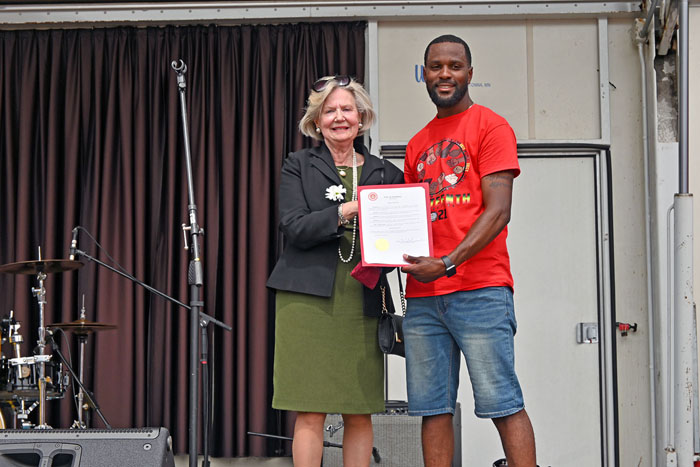 Natalie Anderson/Salisbury Post — Mayor Karen Alexander and Salisbury-Rowan NAACP President Gemale Black pose for a photo following her reciting of the city’s official proclamation of the 156th celebration of Juneteenth.

Annie Boone-Carroll, owner of Boone-Carroll Funeral Home, said she has attended annual Juneteenth celebrations since 2001. But this year’s was by far the best turnout she’s seen.

Boone-Carroll said Juneteenth represents freedom, and everyone coming together as “one nation, under God, indivisible, with liberty for all.”

Salisbury-Rowan NAACP President Gemale Black said it was exciting to see so many people out again to celebrate, especially in the midst of a pandemic.

“When I think of Juneteenth, it’s to celebrate. Celebrate with my loved ones, friends and family,” Black said. “It’s a big family reunion. That’s what we see it as.” 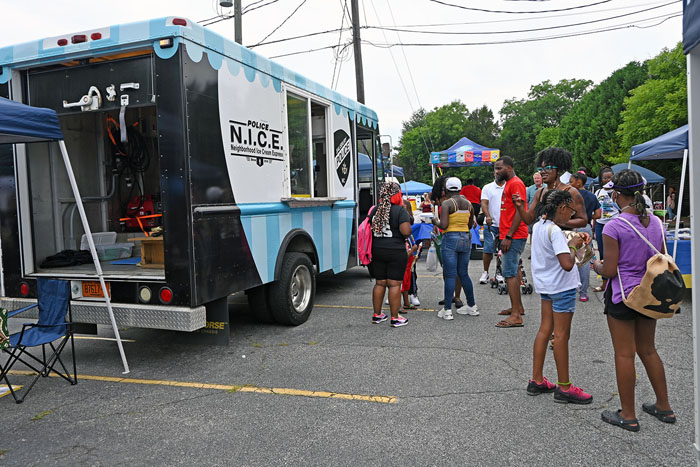 Rev. Anthony Smith, pastor at Mission House, said the federal government’s declaration was another part of a national wave of racial justice sparked by the killing of George Floyd last summer. Smith said more progress is needed for Black Americans, but the holiday allows for a broader discussion of the implications slavery has had on Black Americans.

“It forces us to talk about that true history, that real history,” Smith said. “My hope is that it becoming a federal holiday, we can have a deeper discussion about systemic racism still exists and how we are still, as a nation, we have not met our potential as America — living up to its ideal, its creeds, its founding documents.”

Smith, who has been celebrating Juneteenth since he was a child, said this year’s event was exceptional, especially with the accessible location in downtown.

“Just learn deeper and think of the opportunity as a lesson, and don’t just get caught up in the festivities,” Smith said. “Come out here and support Black businesses. This is a good day to express solidarity with the Black community.”

The Rowan County Democratic Party also had informational brochures about the historic holiday. Among those was a scanned copy of the original declaration in 1865. Shawn Rush, second vice chair for the party, said the holiday is “another day to praise God for another day of freedom” and a day to reflect. 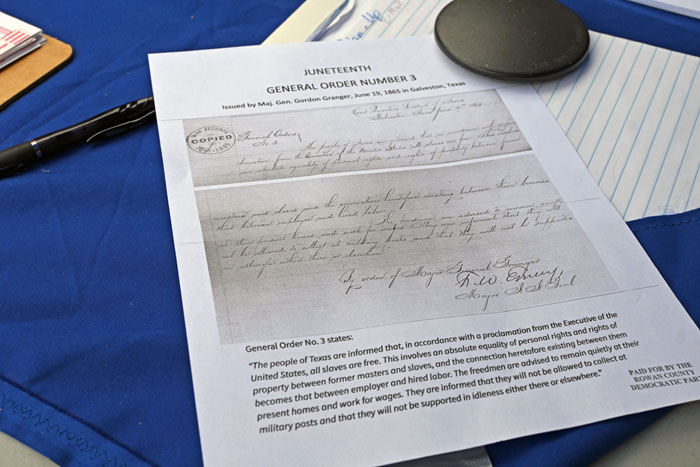 Natalie Anderson/Salisbury Post — The Rowan County Democratic Party encouraged voter registration and provided information about the Juneteenth holiday during Salisbury’s annual celebration along the 200 block of East Fisher Street Saturday. Pictured is a scanned copy of the orginal declaration issued by Union Gen. Gordon Granger’s visit to Galveston, Texas, in 1865 to inform enslaved Black Americans that they had been freed with the 1863 Emancipation Proclamation.

“(Today’s event) couldn’t have happened at a better time, after we dealt with a pandemic and after we dealt with so much injustice and people’s tensions,” Rush said. “So everybody of every different color is out here celebrating. Everybody’s been cooped up in the house, so it gives them a reason to come out in the sunshine. You couldn’t ask for better weather and you couldn’t ask for a better turnout.”

The local chapter of the Poor People’s Campaign also had information regarding mass incarceration of Black Americans, state and local poverty rates and calls to action for racial justice.

Mayor Pro Tem Al Heggins said she could think of at least 100 words to describe the feeling of the holiday’s national recognition, but “fantastic” and “long overdue” were just a few. She also likened Saturday’s event to a “big family reunion.”

“I am so glad that Juneteenth now is a federal holiday because it’s part of our American history,” Heggins said. “It gives me hope that now it sets the foundation for some of the harder work to be done in our Congress and our Senate.” 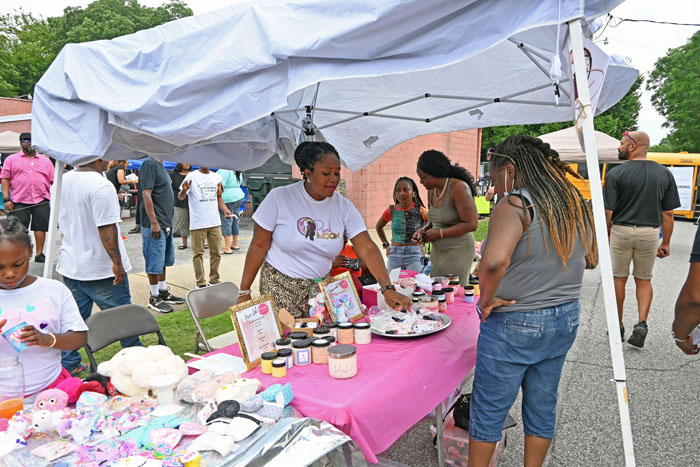 Heggins said federal lawmakers should continue moving forward in reimagining policing across the nation to build stronger relationships in local communities, along with fighting against voter suppression.