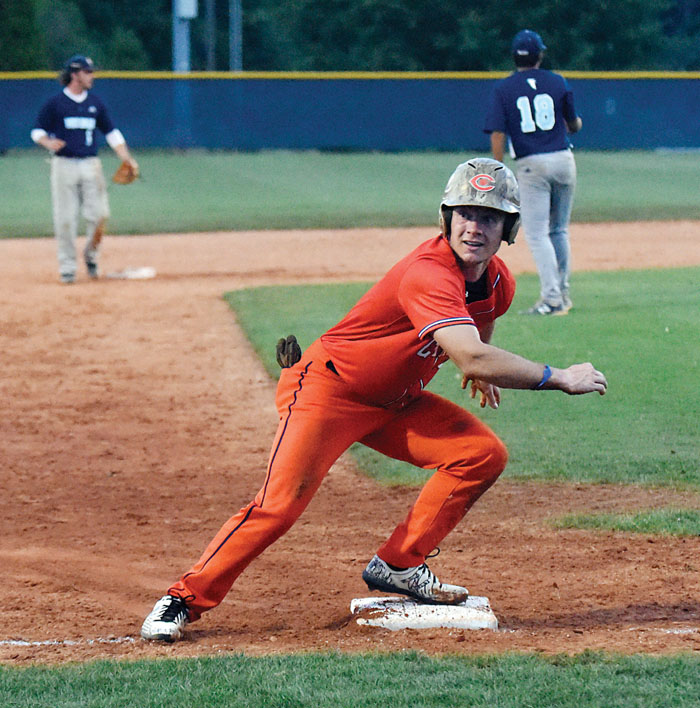 Carson standout CP Pyle drove in four runs with a pair of two-out hits for Rowan Legion. File photo by Wayne Hinshaw, for the Salisbury Post

GRANITE QUARRY — One of a handful of veterans in the lineup, CP Pyle drove in four runs with a pair of booming two-out hits and led Rowan County to an opening-night victory.

Rowan outscored Randolph 11-6 on Saturday to kick off what will be a unique season, no matter what happens. With Newman Park, the Legion team’s traditional palace, undergoing renovation, home games are being played at Staton Field in Granite Quarry with a standard start time of 7 p.m.

A patchwork Rowan County squad that features everything from college players to jayvees handed Randolph (3-1) its first defeat. The offense was good and the pitching was good enough. Rowan committed four errors, but was able to overcome them.

Chase Drinkard, a 2020 Carson graduate who played this season at Southeastern Community College in Whiteville, pitched four innings and earned the win. Shaky defense led to a three-run third for the visitors, but Drinkard battled through it. Kaleb Burleyson, the lone Salisbury Hornet on the roster, pitched the fifth and sixth. Dylan Driver, a recent Carson graduate and a Catawba recruit, finished up.

Rowan put together three hits and two walks in the first inning, but had two men thrown out on the bases, one at the plate, and only scored one run.

After Randolph tied the game in the top of the third,  Rowan answered with four runs in the bottom half. An error and a wild pitch helped. Austin Fulk’s two-run single was the key hit.

Rowan pushed its lead to a secure 11-3 with a four-run fifth. Peyton Summerall started it with a double, and Pyle’s two-run double was the biggest blow.

Fulk, one of the East Rowan Mustangs who was playing on his home field, and experienced leadoff man Charlie Klinger, a former East star who is back from High Point University, scored three runs each.

Fulk, who played second base for East, will be Rowan’s shortstop. Klingler, mostly a catcher in the past, manned second base.

Summerall, West Rowan’s third baseman, had two hits. East Rowan catcher Tristan Miller had a run-scoring single, and Mustangs Aiden Schenck and Jacob Causey got runs home with groundouts. Schenck will be counted on to provide some power.

The Rowan coaching staff remains stable — Jim Gantt, Seth Graham and Adam Patterson, plus Lee Poteat and Jeremy Simpson, who were playing for Catawba College a few weeks ago.

The Rowan outfield — Driver, Pyle and Logan Rogers (.372 at Southeastern Community College) — looks like one of the team’s strengths.