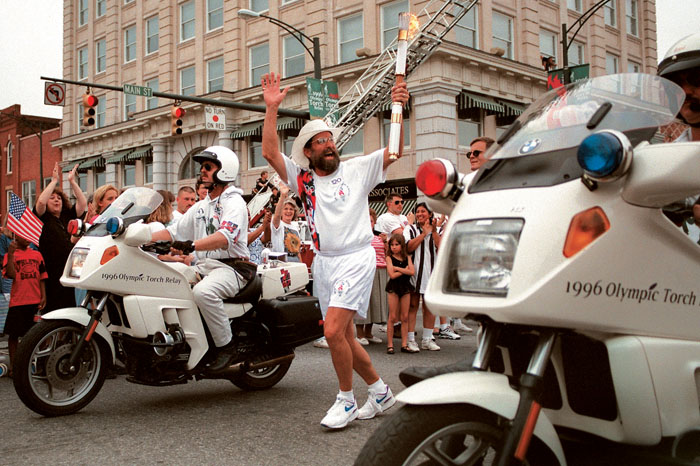 SALISBURY — John Bouk can still picture the throngs of people that filled downtown as he ran the Olympic torch to the the Square on June 24, 1996.

“It was just wall-to-wall people. The sidewalks. The streets. It was just packed. It was unbelievable,” says Bouk, whose route started at the Salisbury Station.

Twenty-five years ago this week, thousands of people lined the streets to watch three local residents and other, non-local torch runners complete a portion of a route that started in Greensboro and ended in Charlotte. Little League games were delayed the watch the spectacle. Olympic trucks blared music. Eager spectators cheered and waved American and Olympic flags. It was a once-in-a-lifetime experience for Bouk and fellow runners, Johnnie Leach and Sara McCubbins.

“I think it was pretty amazing to be a part of that, something that incredible. It seemed like the whole county came out to see it,” Bouk said.

Bouk’s portion of the run was the last among local runners. McCubbins ran through Spencer. Leach ran an L-shaped route from Main Street to the Salisbury Station, where an orchestra of musicians led by conductor David Hagy and Bouk greeted her. Bouk ran an S-shaped route from the train station to the Square.

Particularly amid the COVID-19 pandemic, McCubbins looks back on the torch run fondly.

“We were a community,” she said.

Each of Rowan’s three runners were chosen for work in the community — McCubbins for using her horse farm to help the handicapped, elderly and children; Bouk for founding Christian music festival and fundraiser Godstock; and Leach for lifelong community involvement.

The three were called community heroes, but then and now Leach just considers herself fortunate to be able to help others. 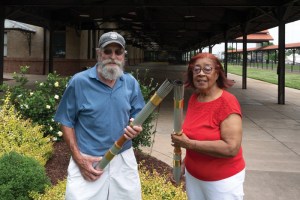 Josh Bergeron / Salisbury Post – John Bouk, left, and Johnnie Leach, right, touch their Olympic torches together at the Salisbury Station. The two did the same 25 year ago, in 1996, when Leach ran her torch to the station and Bouk took it from there.

Bouk’s Godstock started with a fundraiser for Adam Myers, who has since died of leukemia. By the time he carried the Olympic torch, two renditions of the event, funds from the Aid Association of Lutherans and an Adam Myers Memorial Golf Tournament had raised more than $40,000. Because of Bouk’s selection, the event received a major boost from Food Lion founder Ralph Ketner, who had lunch with Bouk and made a “pretty large donation.”

“I’ve been involved in a lot of things,” she said.

That includes serving on more than a dozen community boards, working with prison inmates and being active in her church, Soldiers Memorial AME Zion. Professionally, she was director of the Miller Recreation Center, teacher for Rowan-Cabarrus Community College and recreation supervisor and a teacher’s aide in the city and county school systems.

McCubbins chose a life she knew would require sweat, getting dirty and result in her getting hurt. She bought her first horse at the age of 11, saving up $500, and rode around on her bike trying to find a place she could afford to keep it. She offered riding lessons, trained horses and did odd jobs for money in college, scraping together enough to buy a farm north of Salisbury. She built the barn and horse stables herself, later using the fruits of her labor to help handicapped students and taking horses others might not want to nurse back to health. She later started a horse carriage business after needing one for her own wedding.

The local torch runners found out about their selection with a letter or a phone call and prepared for their big day in different ways, whether it was hitting the track at Knox Middle School, tending to horses or practicing their leg of the run. There were parties and celebrations, including local events led by the Rowan County United Way and an introduction at the Charlotte Convention Center.

“They did a whole lot to make us feel like we were special,” Leach recalled.

Torch run organizers drilled the importance of keep the flame lit into participants. The origin of the flame is ancient Greece, where a fire burned permanently on the altar of the goddess Hestia during the ancient Olympic Games. The flame begins “by the rays of the sun in Olympia, Greece.” 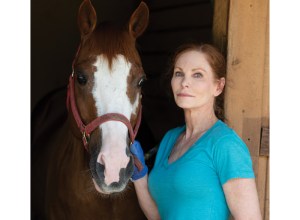 Josh Bergeron / Salisbury Post – Sara McCubbins poses with a horse at her farm north of Salisbury. McCubbins was one of three people who ran the Olympic torch through Salisbury in 1996.

From ancient Greece to Spencer, the flame arrived in Rowan around 4:50 p.m. on June 24, 1996 — preceded by the Rowan Express track team, Spencer residents marching behind a homemade banner and a Coca-Cola truck that painted the town red with merchandise.

After some flame-lighting difficulties, McCubbins ignited her torch at the intersection of U.S. 29 and 11th Street and ran it to the “Welcome to Salisbury” sign near 17th Street. Near the end of the run, she attempted to ride one of her horses, but security prevented it. She was recovering from a broken foot at the time and powered by adrenaline that actually meant she ran too fast.

“A guy told me I ran like a gazelle,” McCubbins recalled. “No one wanted to walk, but now that I think about it, that would have been better because you could have enjoyed the moment.”

She recalled the heat from the flame being hotter than the day itself, which she estimated was 106 degrees.

The flame entered Salisbury shortly after 5 p.m. After other runners ran it into downtown, Leach lit her torch at Main and Kerr streets. She recalled switching between running and walking on her route.

“But I did want to run into the depot because there were TV cameras and everyone in there,” she said.

Bouk’s route included the hill on North Main Street that plateaus at the Square, but he crushed it with adrenaline from seeing people he knew on the sidewalk. He was committed to making it to the finish, too, after being teased by friends about whether he would make it to the top. A photo on the front page of the Post June 25 captured Bouk’s reaction to the crowds at the Square — hand waving, smile from ear to ear and torch held high.

A message on the marquee at the Meroney Theater greeted him: “If you can read this, you made it up the hill.”

From there, Bouk handed the flame off to a cyclist, who carried a torch into southern Rowan County.

Today, torches carried by every runner carried sit in their homes. The runners were offered the chance to buy their torch in 1996 for $275; a majority chose to do so. Since the run, Bouk has put the torch to use, bringing it to local schools and other show-and-tell-type events, while others have kept their torches stored away. Lately, Leach has been thinking about the best ways to make sure her torch is preserved with other Rowan County historical items.

Delayed by the COVID-19 pandemic, the torch run for the 2020 Tokyo Olympics is happening now in Japan. It started in the Fukushima Prefecture on March 25 and will end in Tokyo on July 23.

Salisbury’s next shot at seeing the Olympic flame will be in 2028, when the games are schedule to be held in Los Angeles.