A Tuesday-Thursday-Saturday playoff format combined with the NCHSAA pitch-count rules will make Saturday’s third round even more exciting than usual.

Teams employed their aces on Tuesday and their No. 2 starters on Thursday. The Tuesday starters, if they threw 76 or more pitches, still can’t come back on Saturday. They’re required, by rule, to rest for four calendar days.

That means it’s up to the No. 3 starters — and the bullpens — to get through Round 3, the regional semifinals.

South Rowan is still in good shape on the mound, even with Haiden Leffew and Luke Hiskey out of the mix. Chandler Oddie has been outstanding. Right fielder Jackson Deal and third baseman Jack Weaver are rested and ready to take the mound. 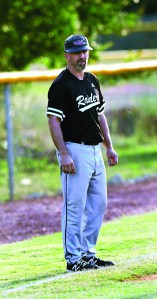 Seeded 15th in the 2A West bracket, South Rowan (14-3) has won at second-seeded West Stanly and romped at 10th-seeded Oak Grove and stays on the road Saturday, heading to Rutherfordton to take on sixth-seeded R-S Central (14-2).

R-S is for Rutherfordton-Spindale. The school opened nearly a century ago at the highest point between the towns of Rutherfordton, Spindale and Ruth. Hence the nickname, the Hilltoppers.

R-S Central won the Southwestern 2A Conference with an 11-1 record.  The losses have been to Chase and South Caldwell.

The Hilltoppers survived 3-1 in their first-round playoff game against North Lincoln, despite being out-hit 10-3.

R-S  Central won 8-3 in the second round against conference rival South Point mostly by scoring seven runs in the third inning.

Andrei Haynes, who hurled most of the South Point game, and Trip Triplett, who pitched most of the win over North Lincoln, have done the vast majority of the pitching this season for R-S Central,  but won’t be on the mound tonight.

Position players Kael Snethen and Hayden Wheeler finished up in relief in the first two playoff games after Haynes and Triplett reached the daily pitch-count limit of 105.

Snethen and Wheeler would be the likely pitchers tonight against a South team that has won nine in a row. The Raiders’ last loss was on May 21.

Forbush, seeded 13th, plays at 9th-seeded East Lincoln in the other regional semifinal in the 2A West bracket.

The neutral-site state championships start on June 25 in Burlington and Fayetteville.