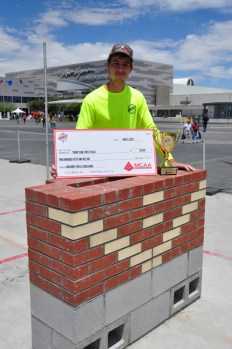 The 2020 West Rowan High School graduate won a state competition in May and picked up two wins at national competitions in Las Vegas last week.

“This one was sort of the end of an era for the project competition,” Jodi Helms, Grant’s mother, said. “He wanted to go out big.”

Helms has been making waves in competition since he was in high school, building entries that get rare or nonexistent perfect scores and drawing the attention of other people in the field. When he won the state Skills USA competition in 2019, his entry had no point deductions. He went on to win in his division at the national level in Kentucky that year.

When he won the Sam McGee Memorial Masonry Contest in Midland in May, he received a perfect score on that entry as well. Helms was recently awarded a general contractor license at age 19.

At this year’s competition, Helms recalled, a man in his late 20s who recently entered the trade asked him to share his secret.

For starters, he is a product of West Rowan’s masonry program.

Helms credits his father, Scott; his uncle, Keith; as well as West Rowan masonry instructor Rodney Harrington for getting him to where he is professionally.

“They taught me everything I know,” Helms said.

He works with his father in the family masonry business. Helms grew up around the trade, but he was well into high school before he started to take an interest. He enrolled in masonry his sophomore year in high school and Harrington helped develop his skills.

Harrington continued to push him professionally after he graduated and served as “tender,” a masonry assistant, while Helms was competing in Las Vegas.

Helms is going to stick with masonry for as long as he can. He plans to keep working with his dad until it is time for him to take over running the business.

“Eventually, I want to start building houses, but that will be down the road,” Helms said.