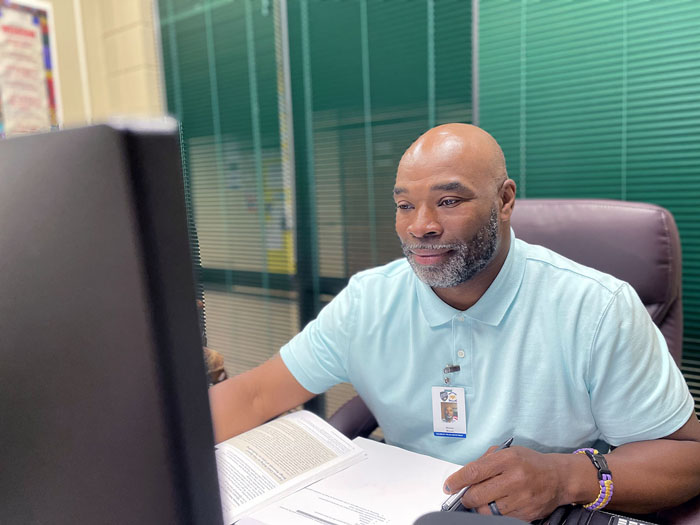 Natalie Anderson/Salisbury Post — Livingstone alumnus and Human Relations Council member Dennis Rivers was hired by the Salisbury Police Department earlier this month to begin a new role as the homeless advocate. Rivers' role will involve educating and building relationships with the broader community and the homeless, and connecting them to local resources.

SALISBURY — Dennis Rivers  brought a new, yet familiar, face to the Salisbury Police Department when he began a new role earlier this month as the department’s homeless advocate.

Rivers, a Philadelphia native, obtained a bachelor’s degree in psychology from Livingstone College in 1997 before spending eight years working in the state’s prison system. He returned to school for a master’s degree in education at University of Phoenix, and worked as the Minority Student Leadership Academy coordinator at Rowan-Cabarrus Community College since 2008.

Finite details of his new role are still being developed, but Rivers said initial weeks will include reaching out to businesses and organizations to build relationships as well as researching what comparable cities are doing to address homelessness. His goal is to help direct the homeless population to resources, touching on the points of food, shelter, clothing, treatment and employment — what Rivers has discovered to be the typical primary reasons for homelessness. Additionally, despite being members of the community, those without homes often don’t have a voice, Rivers added.

Rivers will have direct contact with patrol officers and detectives in the field and the ability to join them on necessary calls. Rivers can also indirectly talk to those who are homeless about available resources through officers.

“We’re trying to make sure they stay safe as well, and at the same time, where they feel comfortable to come to the police department for communication about any threat they’ve had,” Rivers said.

Rivers said it was normal to see homelessness in his hometown’s parks or schools. It wasn’t until he was older that he started to understand the effect homelessness can have in a community. It’s a problem everywhere, he said.

He began to form his current perception of the homeless population after joining the Human Relations Council in 2013 and getting involved with Rowan Helping Ministries. Previously, he only participated in clothing drives and food drives, including with his fraternity, Omega Psi Phi.

“That right there changed my whole spectrum of thinking of outreach and different resources for the community,” Rivers said. “So we started looking at the homeless population differently. We started engaging with our students in the community differently, and just our citizens in general.”

By “different,” Rivers means understanding why someone is homeless and working to eliminate the stigma. His psychology background helped him understand and adapt to different personalities and communicate more effectively. Particularly with the homeless, approach and trust are key two factors.

“Everyone has a different story why they’re homeless and we have to make sure we understand why they’re homeless,” Rivers said. “But at the same time, don’t belittle them because of the faults that make them homeless. Because it could’ve taken one thing for us to be in the same position that they’re in.”

He recalls, jokingly, never having a desire to work for the city despite becoming a familiar face. But then this position was formed, and Rivers said a new opportunity to serve Salisbury “walked right to him,” so he had to apply.