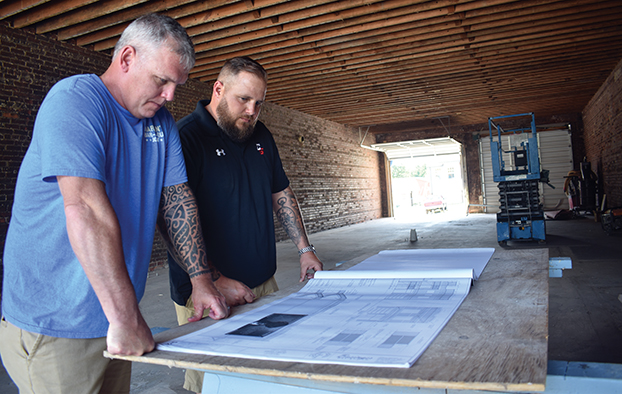 Jonathan Woodward and Jason Overcash look over the design plans for the brewery and restaurant they are bringing to downtown China Grove. Ben Stansell/Salisbury Post

Jason Overcash and Jonathan Woodward, both residents of the southern Rowan County town, are working to bring a brewery and restaurant to a historic building at 211 N. Main St.

Called Grove Cartel Brewing Company, the concept will feature a brewery and taproom on the first floor, a steakhouse-style restaurant on the second and a rooftop patio where drinkers and diners can watch the sunset from one of the tallest points in downtown.

“I’m pumped because I want this to be something for the people of China Grove to come here, gather, hang out with friends and get a great meal,” said Overcash, a proud South Rowan High School graduate. “It keeps China Grove here. It keeps us from having to travel to somewhere else.”

The name of the brewery and restaurant is inspired by Overcash’s decades-long career in law enforcement. He worked as an officer and investigator for both the Concord Police Department and the China Grove Police Department.

“Being involved in narcotics investigations for the majority of my career, the operations and how (cartels) worked always thrilled me,” Overcash said. “My main goal for doing this was for community. If you really examine how a cartel works, if you watch the movies and stories, they use the people in their community to better their lives and make the community’s lives better because other businesses profit off of their success as well. That’s kind of the theme we’re going for.”

The elongated building, which extends back about 80 feet, was constructed in 1928. It originally housed the town hall, fire department and police department. Over the years, the building has been home to a number of businesses. It was most recently a car repair shop and inspection station. 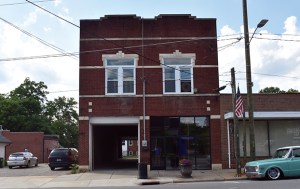 The building in downtown China Grove where Overcash and Woodward are planning their brewery and restaurant has a rich history. It was originally built in 1928 and housed the town hall, police department and fire station. Ben Stansell/Salisbury Post

After taking on residential renovation projects for over a decade, Overcash bought the building in late 2020 as his first foray into commercial real estate. When he purchased the property, he had a clear vision for what he wanted it to be.

“I’ve always loved the restaurant environment. I worked in a restaurant as a kid and I always thought it’d be cool to have one,” Overcash said. “Then when I bought this building, I started soliciting some guys to come in and do a brewery too.”

But during the COVID-19 pandemic, it was hard to find a brewer willing to launch a new venture. Overcash eventually found his man in Woodward, an expert home brewer who has been involved with selling and distributing beer for decades. With Woodward and his craft beer capabilities in the fold, the duo started planning.

Renovations on the space have already begun. In addition to removing the wall that separated the building in the middle, Overcash installed new windows on the facade. The two rollup garage doors on the front and back of the building will be replaced with glass as well, allowing people passing by to see inside. The left, outer wall of the building will be covered with a large mural of the brewery’s logo designed and painted by well-known local artist Abstract Dissent.

Overcash, also owner of Armor Pro Concrete Coatings, is relying mostly on local contractors to transform the space into what he envisions.

The first floor of the roughly 4,800-square-foot building will feature a 27-foot-long bar with 16 taps behind it. Woodward plans on reserving six of those taps for different styles of beer brewed on premises under the Grove Cartel brand. The other 10 will be for breweries across the state.

The decor of the first floor brewery and taproom, Overcash said, will be reminiscent of a speakeasy during 1920s during prohibition. A patio will be behind the building, and patrons will be able to walk up an outdoor staircase to the rooftop for a better view of downtown China Grove. 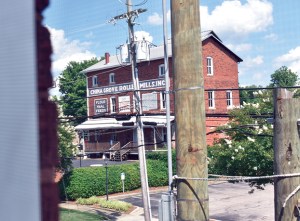 “You’ll walk upstairs to what we hope will be a completely different vibe,” Overcash said. “We’re definitely going to not be a $10 steak place. Our menu will be phenomenal. It’ll be a real nice steakhouse.”

Overcash and Woodward have already started working to form partnerships with nearby producers such as Patterson Farm and Main Street Marketplace to keep the kitchen stocked with local ingredients.

As the developers work, excitement for the brewery and restaurant is building. The Grove Cartel Brewing Company Facebook page already has over 1,000 followers.

“I think a destination is what China Grove needed more so than anything else,” Woodward said. “A good restaurant, good food and a brewery has always been a destination needed from the beginning. That’s why there’s 10,000 of them in the U.S. now. Even small towns flourish when they get them. So there’s no reason we can’t too.”

Although progress will almost certainly be delayed by supply chain issues, Overcash hopes to have the brewery and restaurant open by the end of the year. China Grove residents will be able to taste what’s coming sooner than that. Grove Cartel will provide beer samples and merchandise at Darrell Harwood’s Final Hometown Show at Hanna Park on July 10 from 7-9 p.m.