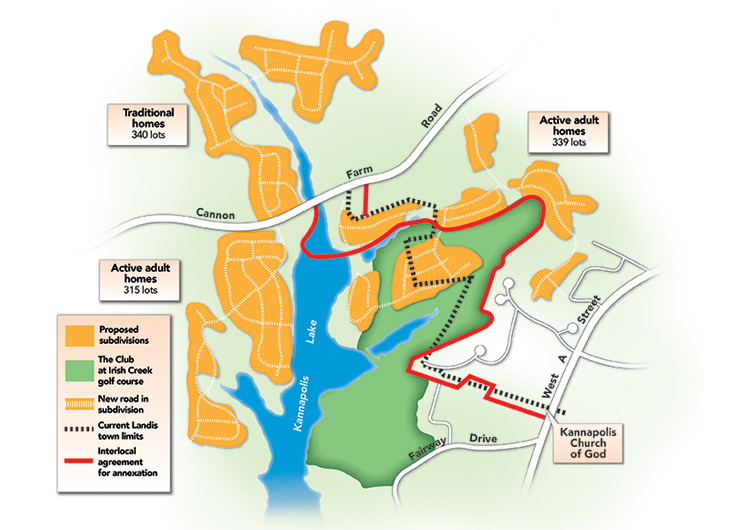 LANDIS — Town officials are moving forward with modifying the extraterritorial jurisdictional boundaries of Landis in preparation for a subdivision project bringing nearly 1,000 proposed homes to the Irish Buffalo Creek area.

The process was sparked by a request from Lennar Homes to develop land in the Club at Irish Creek area for a residential subdivision, which impacts both the city of Kannapolis and the extraterritorial jurisdiction of Landis. Town Manager Diane Seaford and Planning, Zoning and Subdivision Administrator Richard Flowe met with Kannapolis City Manager Mike Legg last month to discuss how to move forward with dividing land for the subdivision, with expectations for up to 300 of the 1,000 proposed homes to be within the Landis town limits.

Flowe has also spent the last year helping Landis develop an official zoning map and Land Development Ordinance to clear many inconsistencies and comply with state law. The board aldermen adopted the proposed map and land ordinance in May.

The first steps involve jurisdictional boundaries to split some lots in the existing Irish Creek subdivision and an area where new lots are proposed. Seaford provided the town with two options, both of which she said would better accommodate the proposal from Lennar and maximize the benefit to both municipalities.

“The first thing that we need to do is look at where we have jurisdictional boundaries currently and the impact that that’s having to some of our residents that literally have lots split between Landis and Kannapolis,” Seaford said. “I don’t want folks to get too concerned about this happening too fast. There will be lots of opportunity for public input and lots of opportunity for the citizens to digest what is proposed.”

Both options would bring seven currently split parcels on Corriher Street and Tamary Way entirely into Landis. Corriher Street would serve as the jurisdictional boundary, to include Kannapolis Church of God on the corner of Corriher and West A streets. The boundary would move the current Kannapolis limits south to the tributary of Irish Buffalo Creek.

Both options differ on the splitting of golf holes between the two municipalities. The second option allows both municipalities to enter into an interlocal agreement for any requested annexation within the areas east of Irish Buffalo Creek and north of Cannon Farm Road to go to Landis. Seaford said staff recommend the second option, and town aldermen ultimately voted in favor of the staff recommendation.

Seaford said changing the boundaries will be a long process that involves public hearings, actions from both governing boards and a joint proposal from both entities for approval from the North Carolina General Assembly. Next steps involve taking the town’s approved jurisdiction option to Kannapolis staff for further discussion before taking that decision to the Kannapolis City Council.

The board met in a closed session following Monday’s regular meeting to discuss the process as allowed by North Carolina 143-318.11 (5) without taking any formal action.

In other business from Landis’ Monday meeting:

• Board members approved a revised audit contract with Martin & Starnes that now includes the drafting of the town’s financial statements, previously conducted by former Finance Officer Pam Dubois, who announced her departure from the town in May. The total contract cost is now $26,500.

• Aldermen approved an application to the League of Municipalities for workers’ compensation insurance, with an estimated final premium of $53,710.

• Aldermen authorized a contract with BlueCross Blue Shield and USI to provide health, dental, vision and short-term disability to employees, with an approximate savings of $30,000 annually.

Mayor Pro Tem Ashley Stewart works for USI, and resident Nadine Cherry signaled her disapproval of the agreement for that reason during the public comment period. Citing guidance received from the UNC School of Government, Seaford said Stewart’s employment is not connected to the town, and he will not financially benefit from the relationship.

• Aldermen approved a contract to provide $1,532 monthly for cleaning services with Blue-J Cleaning Solutions. The firm will clean Town Hall, the Police Department, Public Works and the board room.

• The board also approved a number of amendments to the 2020-21 budget to prepare for the year’s end. Among those amendments was a shift in salary line items without changing the overall total and an additional fund for the new sanitary lift station, which is funded by the North Carolina State Reserve Fund and Clean Water State Revolving Fund. Additionally, $91,615 in grant receipts was appropriated from the Division of Water Infrastructure for a project mapping the town’s water system, identifying system leaks and providing an assessment plan.