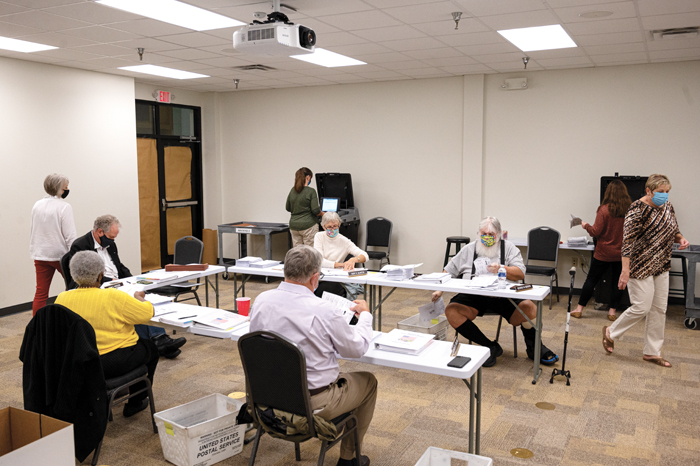 Josh Bergeron / Salisbury Post - Members of the Rowan Countuy Board of Elections after the 2020 election review ballots at tables while staff members feed ballots deemed OK into tabulators.

SALISBURY — Having gained approval from the Rowan County Board of Commissioners, the Board of Elections is moving forward with the purchase of new voting equipment.

Last week, commissioners rubber-stamped the Board of Elections’ request to purchase $204,472 in equipment, software and training from Election Systems & Software. The funding for the purchase comes entirely from the HAVA Election Security Fund, which was authorized by the Help America Vote Act of 2002. The county received a $244,691 grant earlier this year from the fund and has already used around $40,000 to offset costs incurred during the 2020 general election.

The Board of Elections will purchase 42 “ExpressVote” machines from ES&S with the remainder of the money. The new machines are compliant with the Americans with Disabilities Act and will replace the AutoMARKS voting machines the county purchased with HAVA funding in 2006.

“The (AutoMARKS) were getting toward the end of their expected life span before they would probably need repairs or could be having issues,” Elections Director Brenda McCubbins said. “… I’m thankful we were able to replace those after so many years with the newer version with the HAVA grant as well.”

The ExpressVote machines will be placed at voting precincts around the county and will ensure people with disabilities do not face accessibility issues when going to the polls.

“This would help that voter by helping them be able to read (the ballot) because it will read the ballot to you. You can blow up the font so you can see the ballot better,” McCubbins said. “It is very user friendly, so I do think it will be a better experience for the voter.”

The new ExpressVote machines are also much lighter and will be easier to transport and set up at voting locations around the county, McCubbins said.

The 49 AutoMARKS machines, which were also purchased from ES&S, will be returned to the company for about $200 per unit. That gives the Board of Elections a $9,800 trade-in allowance that was deducted from the cost of the overall order.

In addition to the ExpressVote machines and the software needed to operate them, the board will purchase a DS450 high-speed tabulation counter for $51,450. The new counter will be housed at the Board of Elections office and will be used in the case that a recount is required, like it was in November’s election. The county currently has 50 DS200 tabulation counters that are stationed at its various precincts.

Also in the purchase order is an Election Management Software Workstation that costs $3,081. It will be used for reporting on election night.

With commissioners having approved the purchase, the Board of Elections will finalize the necessary paperwork and will order the equipment later this week. McCubbins said the Board of Elections anticipates having the machines in place by November, when Rowan Countians will visit the polls to cast their ballots for municipal elections.