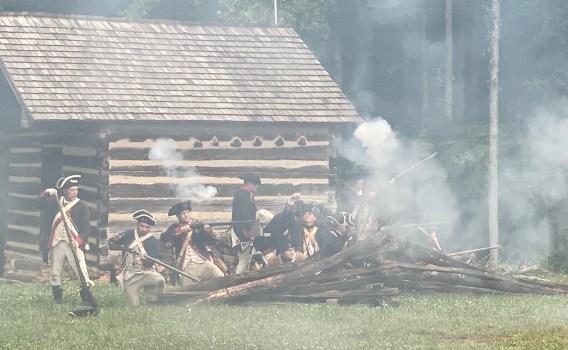 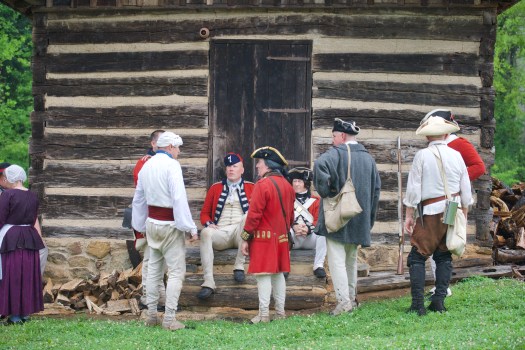 Carl Blankenship - British troops sheltering from the rain on Sunday. 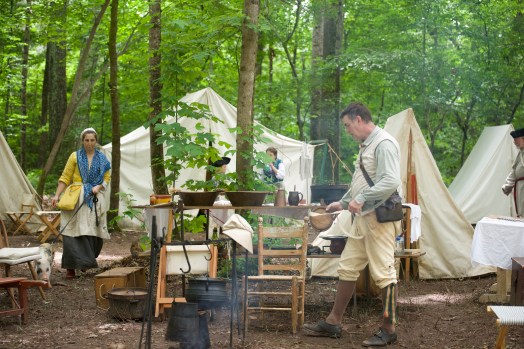 Carl Blankenship/Salisbury Post - Encampments were set up in the woods behind the Old Stone House. 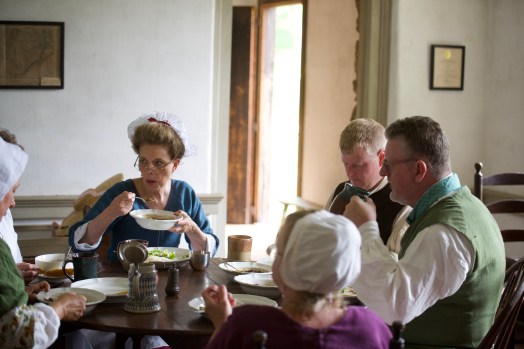 Carl Blankenship/Salisbury Post - Reenactors sitting down for a meal with traditional tableware in the Old Stone House.

GRANITE QUARRY — Cannon and musket fire are not normal daytime fare in Rowan County, but Rowan Museum on Saturday and Sunday brought back to life a conflict that ended more than 240 years ago.

The “Race to the Dan” brought dozens of reenactors to the grounds at Old Stone House in Granite Quarry to give people a taste of revolutionary America with camps, battles and some questionable — but historical — medical practices.

The event got off to a slow start on Saturday, with most of the festivities called off due to rain.

Rowan Museum Executive Director Aaron Kepley said battles during the Revolutionary War period would stop while it was raining normally as well. Reenactors still use muzzle-loading, flintlock rifles. The black powder guns have pans with open tops they load powder in. Kepley said water gums up the powder and rifles, leaving soldiers with only bayonets to fight with in the rain.

The reenactors had fair weather for the Sunday battle between the redcoats and the Americans.

But war was not only fought by British loyalists and American revolutionaries. The troops in Granite Quarry portrayed skirmishes between Continental forces commanded by Nathanael Greene and British forces under the command of Charles Cornwallis.

Jim Cunningham and Mike Rohaus were both portraying Hessian jaegers — soldiers from German states who fought with with the British on behalf of their home countries, which agreed to rent forces out to the British for the conflict. During the battles, the Hessian reenactors were not frontline soldiers. They were marksmen who fought with their own personal hunting rifles that were made to a much higher standard than the average British soldier’s weapon.

Rohaus summed the role of the jaegers as the world’s first anti-sniper unit that went after enemy marksmen who targeted officers.

Cunningham said jaegers generally would be more educated than the average soldier and have more freedom on the battlefield. A typical soldier would be given an order for every action.

History aside, Cunningham and Rohaus agreed reenacting is fun.

“It’s a good hobby. You get to meet a lot of people who like history,” Rohaus said.

Cunningham has a personal connection to the role as well. He was stationed in the German state of Hesse when he was in the military and his family speaks German.

Kepley said the Old Stone Houses’s original owner, Michael Braun, was a German immigrant. It’s believed one of Braun’s sons was a captain for the American side in the Revolutionary War and helped guard a prison in the county.

Kepley said Germans in the eastern part of Rowan County were primarily fighting with the Americans. Scotch-Irish was another nationality fighting prominently in the area.

Robert Cooke on Sunday interpreted a different part of military history. He was interested in reenactment, but his role was to be a surgeon.

Cooke talked to passersby about the state of medicine at the time. Revolutionary America came long before germ theory. Doctors at the time were still using the ideas of humorism, which originated in ancient Greece. The basic idea is to balance the body’s different humors, sometimes through gruesome means.

When people ask about sterilizing tools between surgery to remove germs, he just replies, “What are germs?”