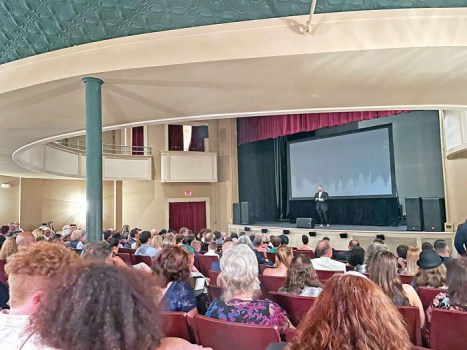 Natalie Anderson/Salisbury Post — Writer, director and star Jacques Belliveau, who is also a local comedian, addresses a full house at the Meroney Theater this weekend for the premiere of locally filmed "Reggie: A Milliennial Depression Comedy." 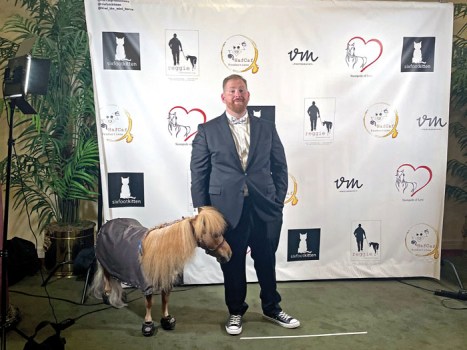 Natalie Anderson/Salisbury Post — The premiere of locally filmed "Reggie: A Milliennial Depression Comedy" kicked off with a red carpet event Friday night, where hundreds of locals took pictures with writer, director and star Jacques Belliveau and Kiwi, the miniature horse who plays Reggie in the film. A portion of all proceeds from Friday and Saturday's shows were directed to Stampede of Love, the Raleigh-based nonprofit that manages Kiwi and other therapy miniature horses. 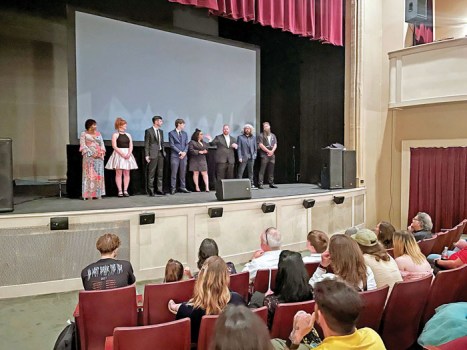 Natalie Anderson/Salisbury Post — The premiere of locally filmed "Reggie: A Milliennial Depression Comedy," which was written, directed and starred by local comedian Jacques Belliveau, this weekend at Meroney Theater was followed by an informal Q&A session where cast and production members discussed filming and mental health. 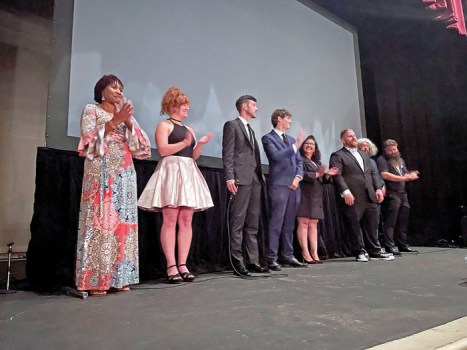 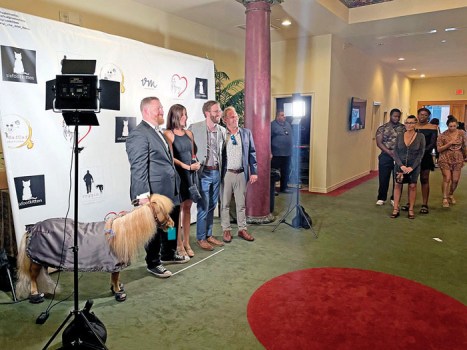 Natalie Anderson/Salisbury Post — The premiere of locally filmed "Reggie: A Milliennial Depression Comedy" kicked off with a red carpet event Friday night, where hundreds of locals took pictures with writer, director and star Jacques Belliveau and Kiwi, the miniature horse who plays Reggie in the film. A portion of all proceeds from Friday and Saturday's shows were directed to Stampede of Love, the Raleigh-based nonprofit that manages Kiwi and other therapy miniature horses.

The premiere began with a red carpet event Friday night, where hundreds of locals filed into the theater and took pictures with Belliveau and Kiwi, the miniature horse who plays Reggie in the film, along the way. The film was also showing Saturday night, with a portion of the proceeds directed to Stampede of Love, the Raleigh-based nonprofit that manages Kiwi and other therapy miniature horses.

Though not the first film he’s written, Belliveau wrote the script for this movie in a single night in May 2018 after experiencing an epiphany while working out at The Forum, hours before he was set to perform a comedy show in Cornelius. During the workout, he came across the song, “Where Would I B Without U” by hip hop artist Spose, on Spotify. Spose’s music was also featured in the film.

“My train of thought is always ‘it’s a ‘no’ until you ask,” Belliveau said. “I’ve written almost close to 100 movies in my life … but this is the first one where I wrote in one night and then just sent it out.”

That action of confidence, or cockiness, Belliveau said, led to local production company sixfootkitten’s interest in collaborating with Belliveau’s HafCaf Productions to film the movie in 43 days.

Before the showing, Belliveau issued two warnings: stay for the credits or prepare for glares from the production crew, and be prepared for anywhere from “six to 96” uses of the f-word.

The Forum also makes an appearance in the film, with Belliveau giving a shout out to co-owners Matt Marsh and Steve Safrit for allowing him to film inside the gym with Kiwi — with essentially no details provided beforehand. He also credited local police with allowing a few streets to be closed temporary during filming — again, with limited details about what would take place. (There may or may not have been some donuts and drifting filmed in his convertible.)

A showing of the movie was followed by an informal Q&A session, where Belliveau, cast members and members of the production crews discussed their experience filming the movie, the extent of their acting experience and mental health. While some cast members have taken some film classes, other actors only had limited experience on-camera. Essentially all of the people involved in the film behind-the-scenes also made appearances in the film.

Ironically, Belliveau is allergic to horses. As for how many times he was bitten by Kiwi? “A lot,” he said.

Cast members fondly recalled instances in which Kiwi would fall asleep while standing up, which provided perfect opportunities for easy cooperation in scenes while filming.

Belliveau calls the film a semi-autobiographical account of his own experience tackling issues with mental health. With the exception of a miniature horse, he explained the featured flashback scenes with his father, therapy sessions and his struggles with mental health and building relationships were all real.

“You basically saw my diary, and then the horse was like the doodle at the top righthand corner,” he told the crowd, adding that it also feels a little weird to be in front of the crowd discussing it due to the authenticity.

Belliveau, 35, said before turning 30, he was resistant to receiving therapy and viewed it as a weakness. But a year before filming the movie, he reached a low-point and began “shopping for a therapist.”

He added that while he was a frequent gym-goer, he discovered that aspect of health doesn’t matter if one isn’t taking care of their emotional health as well. He hopes more open conversations about mental health struggles can lift the stigma, especially “when it comes to men and masculinity.”

“It’s a long road, and you can’t expect everything to be fixed overnight,” Belliveau said. “You have to start somewhere, even if it’s as simple as sending a text to someone saying, ‘Hey, I’m not OK. I don’t want to talk about it right now, but I’m not OK.’ That slight moment of vulnerability can open up a whole world for you.”

Colette Darby, who played Belliveau’s therapist, concurred, adding that sometimes all someone needs is someone to listen to them. Ariella Sanchez, owner of Mamba Grill & Tapas and a friend of Belliveau’s, commended young people for normalizing conversations about mental health, adding that she now frequently speaks about her therapist throughout her daily life.

Superstar Busey was not in attendance, but cast members say it was a memorable 72-hour period spent with him.

“You wouldn’t believe the raw footage of that day,” said Bryan Lowe of sixfootkitten.

Belliveau also detailed the exhaustion of that particular time, as he went nearly 48 hours without sleep between filming and performing at the North Carolina Comedy Festival, and suffered sun blisters from extended time in the sun “as a ginger.”

Belliveau will soon tour “Reggie” across the nation, with plans to discuss mental health along the way. Wider distribution to streaming platforms is anticipated early next year. Belliveau also launched “Reggie: A Millennial Depression Comedy” podcast, which includes a larger conversation about mental health featuring “people from all walks of life.”