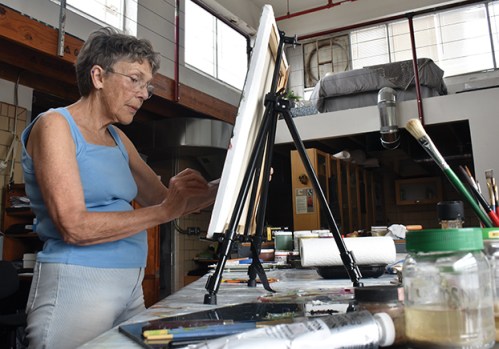 Whitney Peckman works on an oil painting in her art studio, which is right below one of the sleeping spaces in the downtown loft that Peckman and her husband offer on Airbnb. Ben Stansell/Salisbury Post 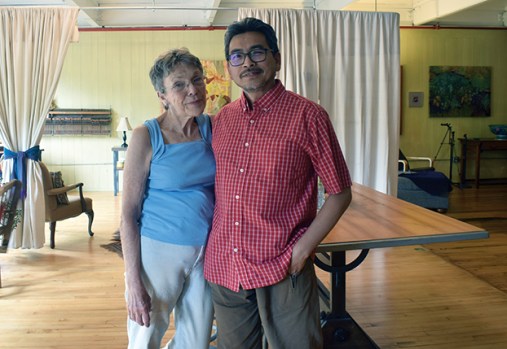 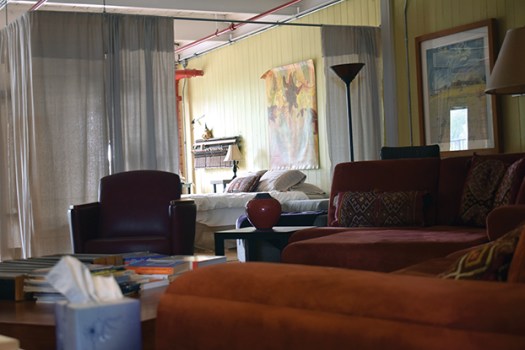 The main portion of the loft has few physical walls, but one of the sleeping spaces available can be partitioned off using hanging curtains. Ben Stansell/Salisbury Post 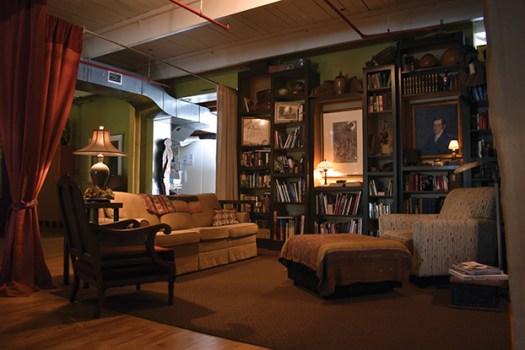 The loft features an eclectic mix of furniture, art and books, including an orange set of lockers leftover from when it was a bakery and original art by Peckman and Ahmed. Ben Stansell/Salisbury Post 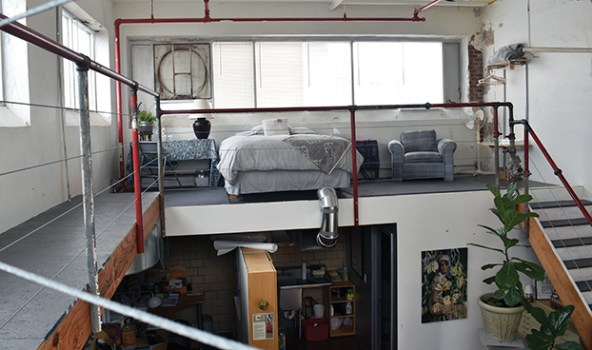 A bed above Peckman's studio gets plenty of light and gives guests a look into an artist's world. Ben Stansell/Salisbury Post

SALISBURY — Walking up a rickety staircase in the darkness, Whitney Peckman had to hug the wall beside her for fear of falling.

It was Labor Day weekend in 2004 and Peckman and her husband Syed Ahmad were, quite literally, blindly following Randy Hemann upwards. They were ascending the only pair of stairs in the 20,000 square foot building that once was home to Flowers Bakery in downtown Salisbury.

“There was only one door coming in and it was dark — pitch black,” Ahmad said.

The two professional artists — Peckman primarily works in paint and Ahmad in glass — were being shown the property by Hemann, then the president of Downtown Salisbury Inc.

At the top of the stairs, the trio entered a spacious room that was falling apart. The wooden floor was dotted with holes. Sprinkler pipes hung down like metal vines. Wooden two-by-fours propped up a sagging ceiling.

Looking at the decrepit space with the eyes of artists, Peckman and Ahmad saw more than just a fixer-upper. They saw possibility.

“We’re artists and we looked at it and said ‘Wow. Amazing,’” Peckman said. “This is every artist’s dream to live and have a studio space in a warehouse or an old factory or a giant open space.”

The two purchased half of the building and moved to downtown Salisbury from their home in northern California. They’ve since transformed the debilitated space into an expressive and eclectic home and art studio. Since 2018, the couple has listed space in the loft on Airbnb, giving explorative travelers more than just a place to rest their head for the night.

“It’s someone looking for an adventure, looking for a cool place to stay,” Ahmad said. “It’s not somebody just staying for the night who wants their privacy. This is somebody looking for something different.”

Peckman and Ahmad’s decision to open up the doors of their loft to practical strangers wasn’t made overnight.  The couple dipped their toes in the water by first offering space in the loft on couchsurfing.com, which connects thrifty travelers with people who are willing to host them for free.

“I decided to do the couchsurfing first to see the concept and then I started to host,” Ahmad said. “It was a good experience doing that. We came to see the idea of having strangers in your home is not that bad.”

Besides, as artists, having a second source of income isn’t bad either.

“Doing what we do in the art field, it’s not a very secure kind of work,” Ahmad said. “It’s a feast or famine situation. Some years are good, some are bad, so we try to do different things. We have the space so we want to make income out of it and also maintain a lifestyle.”

The couple’s first Airbnb guest was an engineer from Berkeley, California, who was in town on work. She reserved the space for 10 days, but her visit ended up lasting an entire month. After her stay, she recommended the place to a colleague in Raleigh, who became a regular visitor at the loft as well.

Peckman and Ahmad said they’ve developed a group of several loyal customers who always spend the night at the loft when they’re traveling through town. Most of the loft’s guests are people in their 20s or 30s. Guests who stay during weekdays are typically there for work, but weekend visitors are almost always tourists. No matter the reason a guest is there, Peckman and Ahmad are quick to welcome them in with open arms.

Peckman and Ahmad are friendly and interactive hosts, partly because of who they are but also because the space demands it. The loft is essentially one cavernous room, which was a choice the couple made when renovating the old building.

“We didn’t build anything too much in terms of partitioning the space,” Ahmad said. “We wanted to keep it wide open because that’s what the space wants to be and you don’t want to interrupt that. Basically you had to be in the space, working in the space to see that it would’ve been a crime to cut it up.”

The Airbnb listing gives guests multiple options. In the corner of the main living space is a bed that can be partitioned off with hanging curtains. Up a flight of stairs, overlooking the bright studio where Peckman works is another bed. There’s also a “hideabed” sofa in the living room that can be turned into a comfortable place for a guest to lay their head if extra room is needed.

Even though most guests enjoy getting to know Peckman and Ahmad, others are less interested in talking. That’s fine too.

“If they don’t want to interact with us, it’s no problem,” Peckman said. “We give them the tour, show them where everything is and give them our phone numbers. We are here in this space, but we are in our own quarters and the only time you’ll see us unless you want to see us is, I usually come out in the morning and make coffee and I’m happy to make you breakfast.”

The two have been given the coveted title of “superhosts” on the Airbnb site.

The cast and crew of the feature film “Goodbye, Butterfly” would likely agree with that assessment. Four members of the film’s crew stayed in the loft for a month while shooting the psychological thriller in Salisbury in 2019.

“We were trying to figure out how much their place would cost in Manhattan because it was one of the most beautiful apartment spaces we’d ever seen,” Tyler Wayne, the film’s writer and director, said in a past interview with The Post.

The loft’s master bedroom was even a filming location, but you might not know it. Peckman said the movie crew removed almost every item from the bedroom to give it a look that fit with the film.

The artist loft was temporarily off the market due to the COVID-19 pandemic. Since listing the space again, Ahmad said it’s been a little slower. But recently, travelers have started to return. The couple hosted guests at the loft this weekend and has a few upcoming reservations on the books.

Although it’s been about 15 years since the couple first bought the space, there’s still some work to be done. In the smaller room that serves as an unfinished foyer to the loft, Peckman and Ahmad have plans to install a “funky art gallery.”

At this point, the future home of the gallery and work space is dark, the wooden floors have a few shallow craters there’s plenty of work to be done. Once again, the two artists can see the possibility.

“It’s a great idea and it’s so flexible for people,” Peckham said. “When we get the upstairs gallery open, we could have other local people come in and teach something. They could teach, people stay here. It’s going to be a really symbiotic opportunity.”