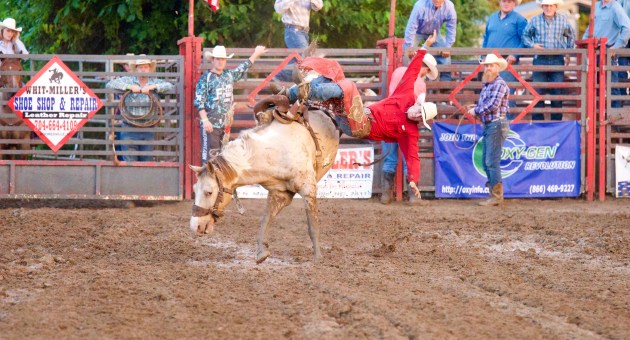 Carl Blankenship/Salisbury Post - Falling is an inevitable part of riding a bucking animal. Arena attendents were on hand to help prevent falls resulting in injury. 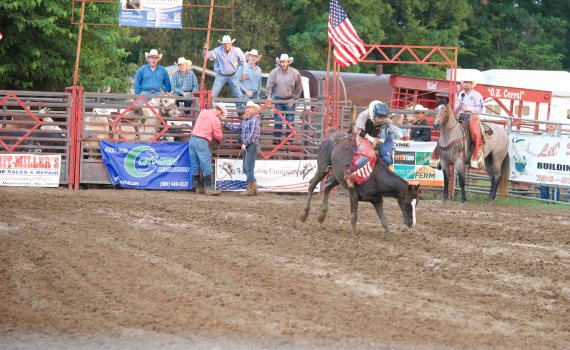 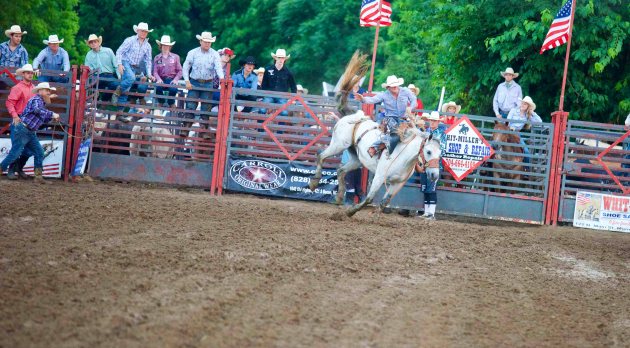 Carl Blankenship/Salisbury Post - After the National Anthem the show kicked off with bucking horse competition.

CLEVELAND — While other events weren’t so lucky, wet weather held off for a full crowd at the Cleveland Rodeo on Saturday night.

The stands for the rodeo were packed Friday and Saturday nights for competition and showcase of western lifestyle. People were filing in to the arena off Redmon Road two hours before the show started on Saturday and kept coming after it began. There were a couple hundred contestants who signed up to ride wild horses, bulls and show off their cowboy skills. Skill levels ranged from high schoolers to professionals.

Organizer Allen Livengood said Friday and Saturday were the 10th edition of the show he puts on with his wife, Sharon. With more than 30 total years in rodeo experience, the events have found their way into Allen’s blood. The Livengoods also produce an event in conjunction with Dixie Classic Fair.

Allen said his favorite part is the people and expression of the western way of life. The venue for the Cleveland event is on the Livengoods’ 130 acres of farmland.

“There’s still a lot of cowboys on the East coast, too,” Livengood said.

Seth White is a 26-year-old professional bull rider from Statesville who owned the point lead heading into Saturday’s competition. Ranked No. 88 in the world, White started practicing with sheep when he was little.

With plenty of experience under his belt, White said there’s no fear when riding — only some nerves while getting ready. He’s taken some bumps and bruises while competing, including a broken collar bone and nose, but the injuries have not made him shy away from competing.

“It’s in our blood,” White said, adding the experience is an adrenaline rush.