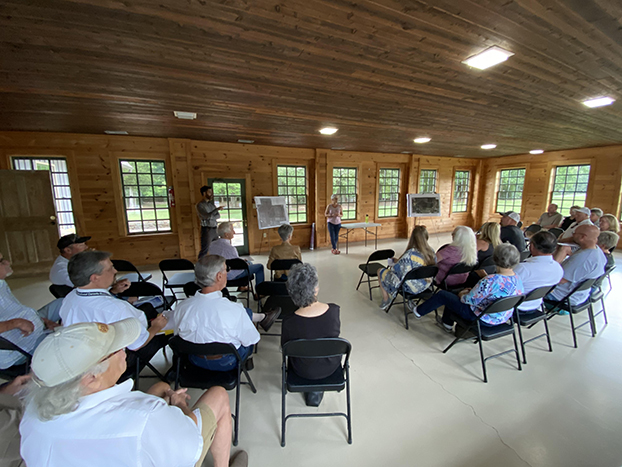 GOLD HILL — A Charlotte-company’s plans for a major solar energy facility in rural, southeastern Rowan County were met with concerns during a community meeting at Russell Rufty Shelter on Thursday night.

“I don’t know that there’s going to be much that can sell any of us,” Joe Lowe, a resident of Gold Hill, said during the meeting. “Again, it’s not about solar. It’s not about a fight against solar energy. Solar energy is great. This just isn’t what we want in our backyard.”

Birdseye Renewable Energy has submitted a proposal to the Rowan County Planning Department to build a solar energy system on a roughly 560-acre plot of land near Old Beatty Ford Road and U.S. 52, not far from the Gold Hill Airpark. The parcel of land targeted for the site is owned by four separate people and will be leased by the company. The lease will initially be for 20 years, with an option to renew for another 20 in five-year increments.

“There’s not a lot else you can do besides trees, and the landowners are excited to get this opportunity to make an income they would not be able to make and hold the land in their families for years without having to do the work on the land that’s necessary,” said Rebecca Cheatham, project manager for Birdseye.

This was the second community meeting hosted by Birdseye regarding the project. The first was held at the airpark about two weeks ago. Many of the concerned citizens who attended both meetings live and fly out of the roughly 36-home park, which features a 3,000 foot runway at the center of the community.

Landon Abernathy, director of development for Birdseye, said the company has always volunteered to host public meetings when planning a new project to open a dialogue with nearby residents. There was certainly no shortage of dialogue on Thursday night.

Almost two dozen people filled the shelter and listened to a presentation on the site delivered by Abernathy and Cheatham. The presentation quickly evolved into a discussion between Abernathy, Cheatham and the residents in attendance.

Worries expressed by residents related to chemicals possibly used in the solar panels, the amount of energy the panels produce, the environmental impact of the site and how the facility might impact Gold Hill’s historic appeal.

A concern discussed frequently was pilot safety. Several airpark residents spoke about potentially crashing into the solar panels in the case of an engine malfunction or other aviation issue while in the air.

“It’s an electrified flight hazard,” said John Ritchie, a pilot and resident of the airpark. “If one of us goes down, and heaven forbid, we’re not cut to shreds by the metal, steel or glass, we’ll be electrocuted.”

Ken Wiseman, a professional pilot who resides in the airpark, said solar panels are not a good landing spot in case of emergency.

“As a pilot, you’ll never go to a place like that to survive,” Wiseman said. “You’ll go for trees, you’ll go for the open fields.”

Abernathy said the company has already consulted with a pilot and run tests to ensure that there’s no risk to airplanes.

“We’ve run lots of glare analysis coming into this and they’ve come back all clear on straight approach paths,” Abernathy said. “We’re learning more about how airpark pilots fly and what they need and running that down with our consultants and making sure that our glare analysis and our engineering holds out.”

Other questions included what happens to the solar site when it’s no longer used. Rowan County commissioners addressed that concern in the updated solar energy system rules they passed earlier this year.

Any utility-scale site like the one proposed by Birdseye must have a decommissioning plan updated after 10 years. Every five years afterward, it must ensure the site will be properly taken offline in the event it is no longer producing energy. To ensure that the company goes through with decommissioning, county government now requires an assurance bond. The proposed solar energy facility will have to adhere to other rules, including buffering and an emergency management plan.

Abernathy attempted to sell the residents on the project for a variety of reasons.

“We’re low. We’re quiet. We don’t cause a lot of traffic. We increase tax revenues. We don’t cause additional emergency response, seats on school buses, a typical draw on county resources,” Abernathy said. “I really think there’s a real argument here that you’re blocking off this land for the long term for a use that is low-impact.”

Birdseye’s proposed site first has to be evaluated by the Rowan County Planning Department, passed by the planning board and approved by county commissioners. The planning board could consider the project in July.

If approved, Cheatham said the solar farm could be operating in five years. Birdseye will market the site to potential customers once it is ready for construction.