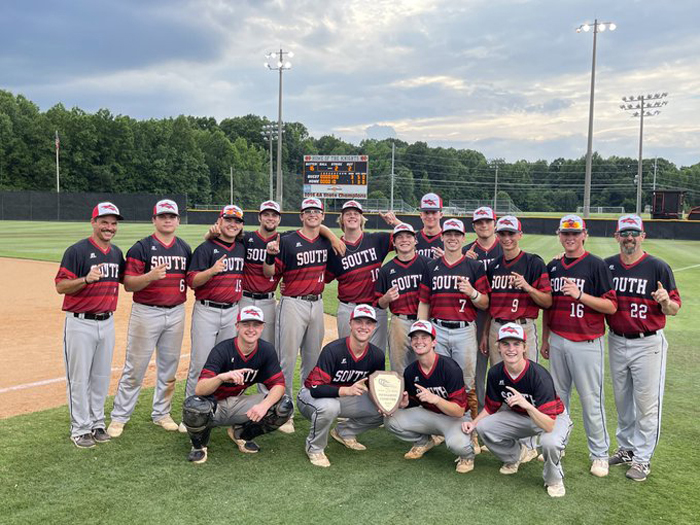 WELCOME —  Runs were so hard to come by that the key play in Thursday’s Central Carolina Conference Tournament championship game may have been a sacrifice bunt. 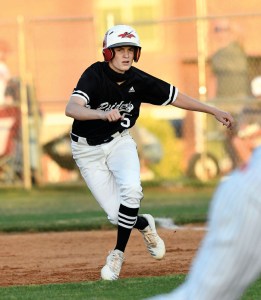 Finch McMillin laid that bunt down in the fifth inning, and it led to third-seeded South Rowan’s 3-1 win over top-seeded North Davidson.

It was still scoreless going to the top of the fifth, but Jacob Ritchie started the inning with a line-drive hit and JD stroked a ground-ball single through the infield to put two men on.

North Davidson’s first and third basemen charged in hard, but McMillin still made a good enough bunt to move both runners. The only play was at first. Sacrifice executed.

“We had a recent practice where all we did was practice bunting in a confined space with infielders charging, and it really makes you aware of how good a bunt you have to make in that situation,” Chrismon said. “It paid off. Finch made a great bunt under pressure and set up a three-run inning.”

Leadoff man Kane Kepley singled home a run. Nathan Chrismon took another HBP — he’s had a ton of them — to make it 2-0. Ty Hubbard put a ball in play to make it 3-0.

“We didn’t settle for one,” Coach Chrismon said. “We put up a crooked number. Huge.”

South’s pitchers and defense did the rest.

It was the first time South had won a baseball conference tournament since 2003, about the time the current seniors were born. That win came over R.J. Reynolds on North Davidson’s field, back in South’s 4A days in the Central Piedmont Conference. South won a regular-season title in 2005, but didn’t win the tournament that year.

Luke Hiskey (2-0) got the start and went five innings. He walked two men in the first, but he worked out of it. He didn’t allow any more walks and he didn’t allow a hit until the fourth inning.

“He executed the game plan that we’d talked about,” Coach Chrismon said. “He mixed up his pitches and pounded the strike zone. He let our defense play behind him.”

The Black Knights (11-4) nicked Hiskey for a run in the fifth on a flare, a steal and another flare, but Jackson Deal made a spin-throw in right field to shortstop Chrismon, who had the ball waiting for the sliding runner at second base.

“We’ve got a lot of confidence in Chandler,” Chrismon said. “He’s been pitching great.”

Oddie sailed through the bottom of the sixth.

Before South batted in the seventh, lightning was spotted 7.4 miles away— a mandatory 30-minute delay — and the game was halted for nearly an hour.

“We looked at that delay as just one more test,” Coach Chrismon said.

South loaded the bases in the seventh but couldn’t score. It didn’t matter. Oddie put away the Black Knights 1-2-3 in the bottom of the inning, striking out two.

“He located before and after the delay,” Coach Chrismon said.

South did a lot of things right. North Davidson pitcher Merritt Beeker, who is headed to East Carolina, pitched the first three innings. He kept South off the scoreboard, but he didn’t strike out anyone.

“The first time we faced Beeker this year (North Davidson won 6-1 on May 21), he struck out 11 in five innings and we had four or five guys strike out looking,” Coach Chrismon said. “We put the ball in play today. We had better two-strike approaches.”

For the game, South had just one strikeout at the plate, and the Raiders didn’t make an error. They made a couple the first time they played North Davidson.

The tournament didn’t change any seeds for the 2A playoffs. South has been locked into the No. 15 seed for a while, while North Davidson knows it will be randomly seeded somewhere 1 to 9 in the 2A West bracket when the pairings come out on Saturday.

But the victory meant a lot for South in a lot of ways.

“This is our last year in the CCC and we really wanted to go out with a crown,” Coach Chrismon said. “To do it we had to beat Oak Grove and North Davidson, the teams that beat us in the regular season, and we had to beat them on the road. We looked at this tournament as a great opportunity. These were like playoff games, and they were great  preparation for what’s ahead of us.”

South (12-3) has won seven in a row since that loss to North Davidson.